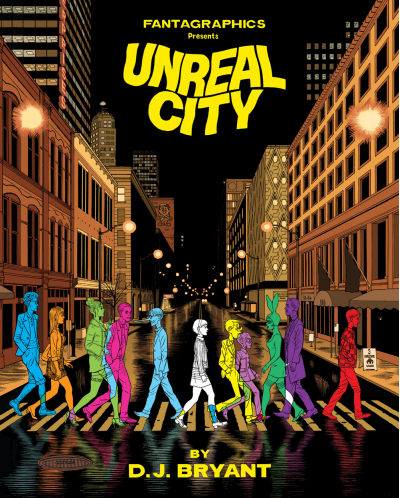 By and large long-form reviews seem to be the order of the day here (at least so far) with this new blog that I am, admittedly, still “feeling my way through” or whatever, but one thing I wanted to do when I decided to “break off” my comics criticism from its former home on my movie blog was to crank out some sort of weekly(-ish) column that takes a quick look at some stuff I’ve read recently that, for one reason or other, I just don’t feel compelled to devote 1,500 or more words, and an hour or more of my time, to discussing.

First up as far as that goes, then, is D.J. Bryant’s debut collection from Fantagraphics, Unreal City. A friend suggested that this book would help scratch my Lynch itch now that Twin Peaks is (deep sigh) over with, and I guess I can see the comparison to a degree, but these five stories (all of which have previously appeared elsewhere, although not in a fancy, oversized hardcover like this) wear a number of other conspicuous influences on their sleeves, most notably Daniel Clowes, with the protagonist of the last (and best) strip, entitled “Objet d’Art,” often appearing to be a near spitting-image for Clay from Like A Velvet Glove Cast In Iron. Perspective, reification, objectification, obsession, selfishness,  alienation, lethargy, and of course sex are major themes running through everything on offer in this book, and while Bryant seems to have a surface-level grasp on various art styles ranging from photo-realism to Harvey Comics-style “hijinks” cartooning, his technically proficient illustrations are ultimately as facile as his narratives, all of which hew tightly to a “Twilight Zone for grown-ups” formula that hinges on “twist” endings that not only usually fall flat, but ultimately undermine the character-driven psychodrama leading up to them. Bryant probably has some great comics in him waiting to come out, but they’re not to be found in these pages, and probably won’t emerge until he figures out how to distill all the voices of others that are whispering in his ear into one that is more distinctly his own.  I’ll keep an eye on his stuff to see how his work develops, as he does appear to have plenty of potential, but I can’t in good conscience recommend that anyone spend $16.99 on this uneven — and largely unsatisfying — book. 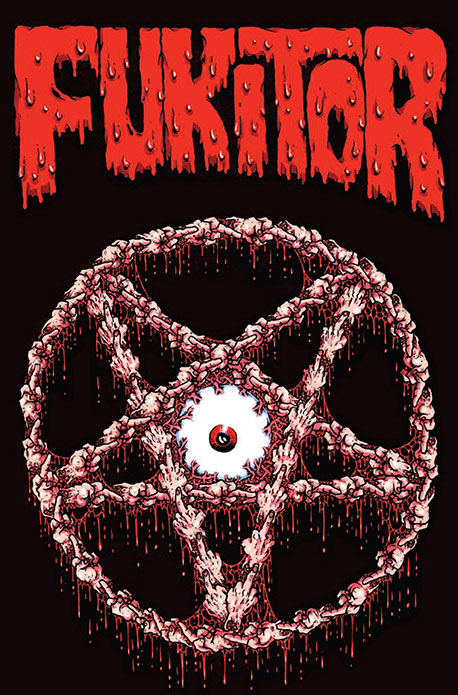 While we’re on the subject of Fatagraphics, the first book released under their small-print-run Fantagraphics Underground (“F.U.,” get it?) imprint, Jason Karns’ Fukitor, has just rolled off the presses for a second time, and while more or less every critic I respect (and even a few I don’t) have spent the last couple of years imploring everyone, everywhere to avoid this collection culled from the pages of Karns’ self-published “floppies,” my disdain for authority, particularly self-appointed authority, kicked in and I decided to give it a shot. Turns out I should have listened to the army of detractors, though — these “EC On Bathtub Crank” strips are desperately trying to achieve Mike Diana or S. Clay Wilson levels of subversiveness, but their bizarre combination of painful self-awareness and utter lack of self-examination ends up making them feel a lot more like borderline glorifications of the racism, sexism, misogyny, and psychopathy that I’m guessing they’re theoretically designed to be functioning as a critique of. Karns certainly fits well within the “ugly art” tradition, but a collection of his visual grotesqueries sans narrative would probably make for a better book, since his “writing” (such as it is) basically functions as a wink and a nudge to audiences saying “come on, admit it, you like this shit.” The dark side of the “dudebro” culture that’s been seeping in at Fanta’s margins thanks to cartoonists like Matt Furie and Ben Marra. 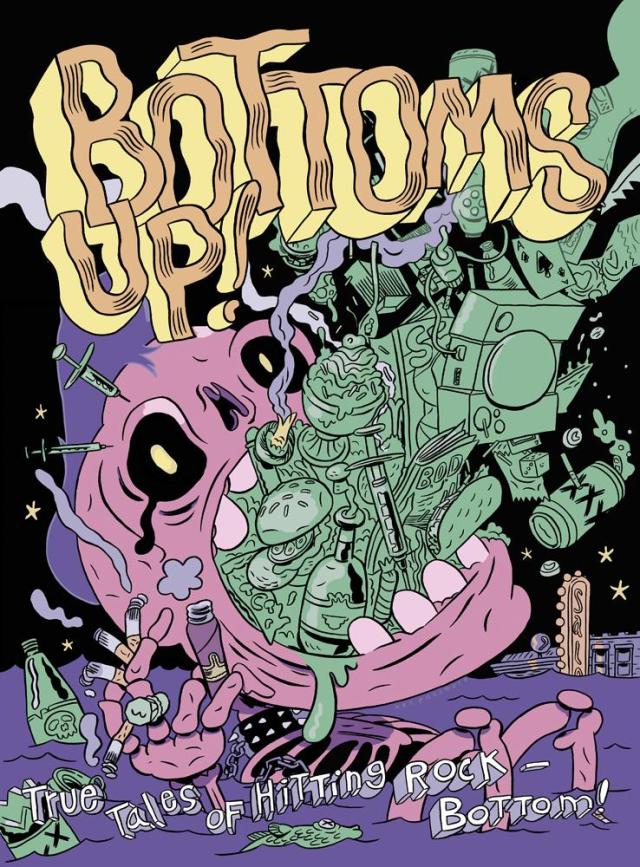 Bottoms Up! is the latest thematically-assembled anthology from J.T. Yost’s Birdcage Bottom Books, and since it’s subtitled True Tales Of Hitting Rock-Bottom!, you already know what this one’s all about. Yost has once again assembled a flat-out superb collection of contributors for this book, with Noah Van Sciver (as you’d expect), Max Clotfelter, Meghan Turbitt, Jess Worby, John Porcellino, Sara Lautman, Peter S. Conrad, and Tatiana Gill being responsible for the strips I found most compelling, but even the “weaker” entries still have something to offer, and a good 25% or so of the cartoonists featured in this thing are folks I’ve never even heard of, so that’s always exciting. The contents are a mix of autobiographical stories and visual adaptations of the lives of anonymous others, and just in case you’re burned out on sordid tales of booze and drugs, fear not : addictions to porn, religion, sex, gambling and other vices are all present and accounted for, as well. The great Ben Passmore provides the cover. Buy this one now. 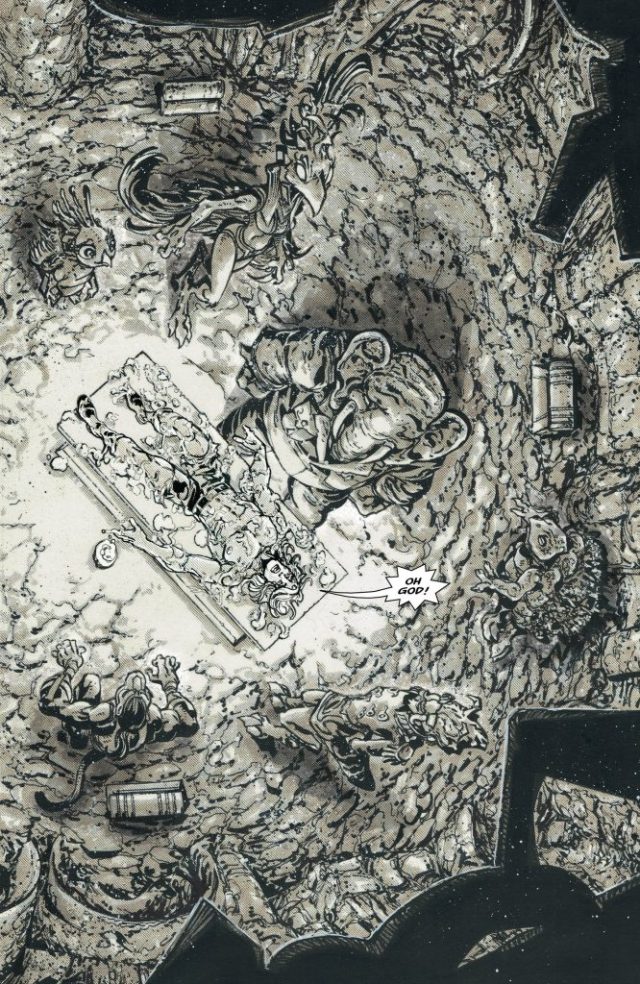 On the mainstream comics front, this week saw the release of Kamandi Challenge #9 from DC, and while this series has been as up-and-down as you’d expect given its “round-robin” format, it’s fair to say that this was the issue everyone was looking forward to given that it features a team-up of current “hottest writer in the business” Tom King behind the keyboard and TMNT co-creator Kevin Eastman on art (Robbie Williams II provides inks). Presented in glorious black-and-white, this is easily the most visually interesting “Big Two” comic we’re likely to be served up this year, and King’s script, while overly-stylized and frankly desperate to be noticed, is nevertheless a harrowing, frighteningly stripped-down view of captivity, small-group dynamics, uncertainty, and how fucking annoying optimism can be. Two things I’m sure of : Jack Kirby is looking down on this comic from on high and smiling, secure in the knowledge that, finally, somebody got one of his concepts exactly right; and Rick Remender, if he ever reads it, will feel his blood pressure going up by a good 10-20 points as he sees pretty much every theme he’s put forward in his various ongoing four-color therapy sessions more or less completely negated in the space of 22 sparsely-dialogued pages.

Okay, that’s going to do it for this week, thanks to anyone and/or everyone who’s reading this, and if you think I should keep doing this sort of rapid-fire column on a weekly basis, then by all means, please chime in and let me know. I’m not too proud to admit when I’m desperate for feedback, and this whole “brevity” thing, well — it’s kinda new for me.