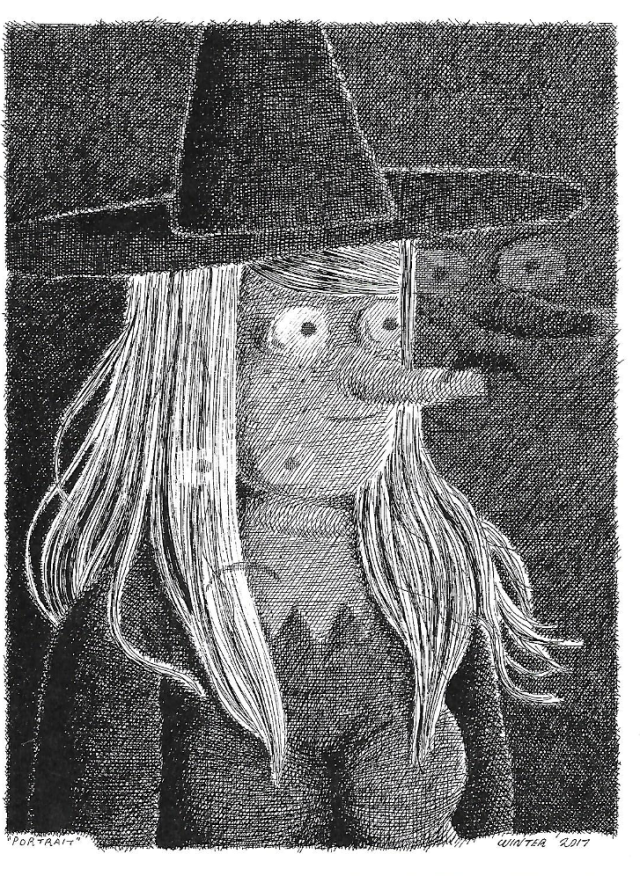 Okay, look, who are we kidding? Fantagraphics’ Now #1 is the “big story” in comics this week, as well it should be, but I’m still cobbling my various and sundry thoughts on that one together for a comprehensive review that I should have ready in the next few days. Until then, though, let’s take a quick look at a handful of other items new on shelves and/or in my mailbox that grabbed my attention, for good or ill, this week —

Portrait is a self-published collection of strips by Simon Hanselmann that ran as part of his “Truth Zone” (or TZ, if you prefer) webcomics series. The initial printing sold out pretty quickly and I missed out on it, but I ordered one up pronto when word got out that he was headed back to press (or, more likely, Kinko’s) with it. Megg. Mogg, and Owl take aim at the so-called “alternative comix scene” in these pages, and while it’s all reasonably entertaining, especially if you have — uhhhmmm — “concerns” with the targets of  Hanselmann’s sharp but (mostly?) quasi-friendly jabs, it’s also true to say that a fair amount of the “backstory” you need to make head or tail of some of this shit took place on various social media platforms, most notably twitter, some time ago, so after awhile it starts to feel not only vaguely incestuous, but also a bit arcane. I laughed out loud a few times, and that’s worth something I suppose, but if you’re expecting anything with a passing semblance of actual critique to it, you’re bound to feel more than a bit disappointed, as this is mostly just petty “industry” gossip with punchlines at the end. Kinda fun, but somebody from the small press “community” pointing out how ridiculous everybody else involved with it is really isn’t enough to sustain interest for even the short length of this publication, and while Kim O’Connor spent a lot of time in her (well-written as always) review of this comic wondering whether or not it counts as “art,” it’s safe to say that Hanselmann himself clearly believes he’s raised “snark” to an art from, regardless of what any of the rest of us think.  Extra points for bravado there, I suppose, but after a couple of strips were read I actively began failing to see the point. Probably of interest to Hanselmann completists only. 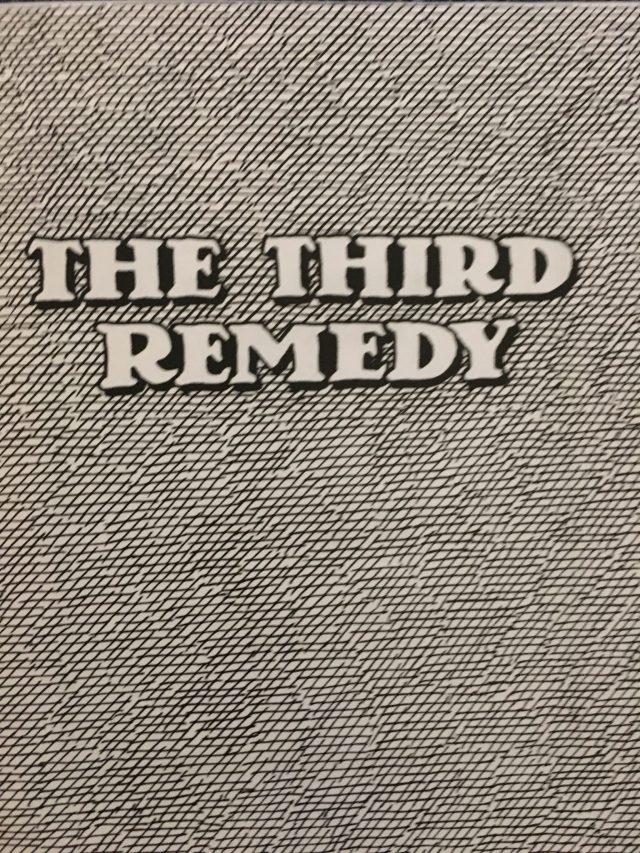 The Third Remedy is a new mini-comic by Chester Brown offered as a premium to his Patreon subscribers (side note, Brown offers great value for your monthly contributions to his continued survival) that provides a pretty solid case study in the “art” of detournement or, as Bob Levin at TCJ would have it, “recontextualization,” given that it takes a pre-existing Carl Barks “Duck” story from Walt Disney’s Comics And Stories  issue number 101 (published in 1949) and swaps out Donald Duck and his nephews Huey, Dewey, and Louie with “Golden Age” iterations of Batman and Robin and Daisy with Batgirl,  while leaving  the one-off character of Mrs. Gobblechin as is. It’s interesting, to be sure, and superbly-drawn as you’d expect, but doesn’t aspire to, much less achieve, anything beyond being a fun little curiosity. There’s no harm in that by any means, and the insertion of the “Bat-family” into the proceedings has the probably-intended effect of pointing out not just their strained sexlessness but perhaps even Batman’s fear of both sex and feminization, but some of the brilliance of Barks’ original story is — more by dint of necessity than anything else — lost in translation, and so I have to wonder if people who are reasonably “fluent” in the world of comics really aren’t and/or shouldn’t be the “target audience” for this self-published little “floppy,” especially since Brown doesn’t credit himself anywhere in it. I liked it, I appreciated receiving it, I read it a couple of times, and that’s all fine and dandy — but to be honest, this might have more of an “impact” if you just found it randomly on a bus-stop bench or something and didn’t know what the hell to make of it.  In the aforementioned TCJ piece, in fact,  Brown remarks that he “like(s) the idea of people encountering it and wondering what it is.” He also says that he’s considered printing some more off and leaving them in various locations around town, and that sounds like a pretty good idea to me.

Slots #1 marks the start of a new series (or mini-series, truthfully I don’t know which) from Image (specifically Robert Kirman’s Skybound imprint, so it’s not a creator-owned work — booooo!) by writer/artist Dan Panosian that looked, at least at first glance, like the kind of thing I probably wouldn’t bother with, but I caught a few preview pages at the back of some comic or other (hey, I guess that does actually work!) and found myself sufficiently charmed/impressed to give it a go, and whaddya know? This was actually a whole hell of a lot of fun. Panosian’s story about a washed-up former prizefighter turned small-time scam artist who returns to Vegas to help a former flame and settle some old scores is, admittedly, the kind of thing we’ve seen a thousand times before in the movies, but it’s got one of those “likable scumbag” protagonists, the dialogue ranges from spot-on to sparkling, the broad-stroke characterization hits the mark, and Panosian’s
“scratchy,” free-flowing art is a lot of fun to look at. The Kurtzman-esque lettering he uses for his chapter headers is another nice little plus and rounds out a package that I have no hesitation in calling the most pleasant out-of-left-field surprise in the last few months.

Finally, in the spirit of not ignoring “The Big Two” entirely, we come to Punisher Max : The Platoon #1, which marks the return of both the Max Comics imprint from Marvel (we’ll see how long that lasts) and Garth Ennis to the character that he’s arguably most closely associated with (this is the point at which hard-core Jesse Custer and John Constantine fans put out a contract on my head, I’m sure — relax, I did say “arguably”). Honestly, though, I could give a shit who’s writing Punisher comics, but I’ll take a chance on pretty much any Garth Ennis combat yarn, and given that this is all about Frank Castle’s Vietnam days (is it true he’s been “retconned” into an Iraq or Afghanistan vet now?), I was sold on it going in. Smart move, as it turns out, since this one looks like another winner. Ennis pulls no punches in terms of showing both how hopelessly fucked the situation was over there and how openly most G.I.’s admitted it, and to say that Castle has wandered into a situation where the command structure has “broken down” would be an understatement — it’s downright blown off entirely by the grunts doing the killing and the dying. So, yeah, he’s got his work cut out for him. Meanwhile, in the present day, a reporter tracking down the titular platoon’s surviving members promises a bit of mystery in that it’s nowhere near certain where said journo is getting their information from. Goran Parlov’s art is solidly competent if far from memorable, and some nicely subtle visual cues to the late, great Steve Dillon come off as both entirely unforced and respectful. He probably would have loved to have drawn this comic, and I damn sure enjoyed reading it.

Okay, I think that’ll about do it for this week’s wrap-up, thanks for the kind words everyone offered both here, via email, and most especially on social media last week — I’m no Joe McCulloch by any stretch of the imagination, but with the entirely understandable demise of his column, some kind of semi-omniscient look at what’s new in the world of comics every week with at least a vague hint of a “consumer-centric” approach to it is sadly missing in the nominally “indie”  murky backwater of the funnybook world , don’cha think? And given that it doesn’t get much more murky or much more backwater-y than this little-trafficked blog, I figure I’ll keep doing my part to tell you what might be worth spending your money on until folks either tell me to find something better to do with my time or start finding something better to do with theirs.