Once again into the breach, as we take a look at various items that caught my interest from the past week, whether at my LCS or in my mailboxes, physical and electronic —

Baking With Kafka is Tom Gauld’s latest collection from Drawn + Quarterly, and I’m sorry to say that the shtick is wearing a bit thin. I gather that Gauld is viewed as something of a national treasure in the UK, and that’s all fine and dandy, but $19.99 for a collection of strips that have all been published elsewhere (most notably The New Yorker and The Guardian) is a bit much, unless said strips pack in quite a few laughs — and I’m sorry to say these don’t. I really rather enjoy Gauld’s minimalist style, but it works better for me in leisurely, longer-form narratives like Mooncop. Here he “reaches” for too many punchlines (most of which come up flat), and strains to be topical when his illustrations really aren’t all that naturally conducive to real-world “grounding.” A few years back his stuff really worked for me, but his earnest refusal to break from formula has strained my last nerve. If he does more original book-length work (notice how I steadfastly avoid using the term “graphic novel” whenever possible) I’ll probably check it out, and just as probably enjoy it, but as far as the collected stuff goes, this is the end of the line for me.

All-Time Comics : Crime Destroyer #2 is the second issue (duh!) featuring this character, but fifth (unless I missed one) overall in the line from Fantagraphics, and while I gather that the somewhat fashionable thing to do is to bag on this comic, taking particular note of its (obvious and apparent) shortcomings  when measured against Michel Fiffe’s Copra, I’m not at all convinced that they’re necessarily trying to do the same thing. Fiffe’s playing by exact self-imposed rules according to an equally exact and equally self-imposed schedule, while the principals behind ATC — most notably Benjamin Marra and Josh Bayer, who uncharacteristically aren’t joined by others on the main story here — seem to be making things up as they go along. Five issues in (again, unless I — ah, fuck it) ATC may have a fairly distinct look, but it still feels very much like a project that’s finding its footing. I can understand why lots of folks find that frustrating, but for me it’s exciting, because you literally never know what the next page holds. Too earnest to be labeled a spoof, yet too tongue-in-cheek to be considered pure homage, maybe we’ve just gotta finally take Bayer, Marra, and Co. at their word here and accept that what they’re doing is a fun, dumb, colorful super-hero line in the vein of late-“Bronze Age” Marvel. It seems to me that too many greater minds than mine are looking under every nook and cranny for signs of intentional irony here and, finding none, walking away a little bit pissed off. Excuse me, but — since when is lack of irony a bad thing? Is it so hard to accept that Bayer and Marra just like this kind of shit and want to try their hand at making some? At the risk of forfeiting every single “cool point” I’ve ever earned, I say this is “must-buy” stuff. 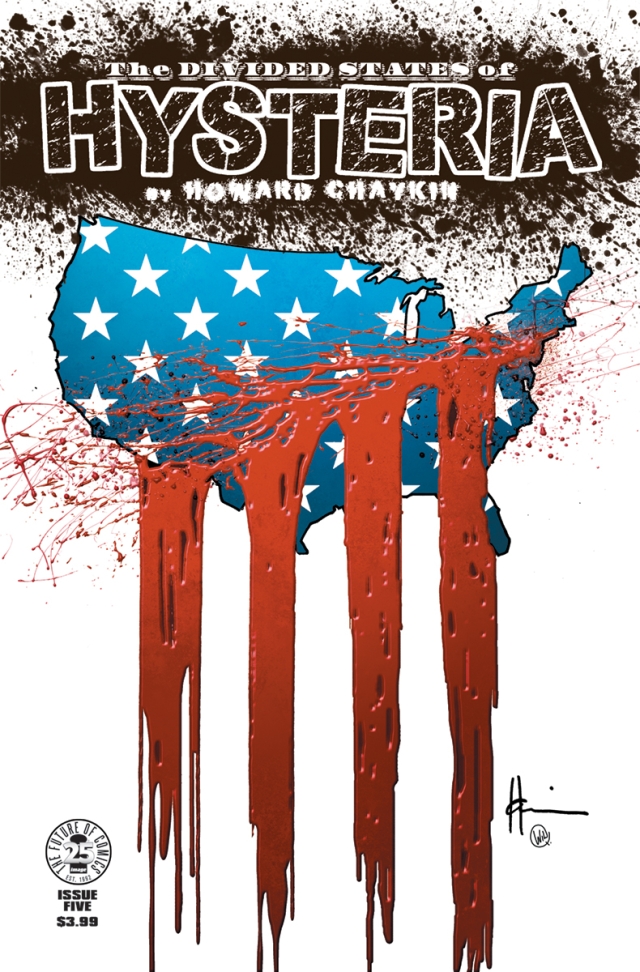 And since I’m busy dragging my reputation into the gutter, I might as well come right out and admit that I’m enjoying the hell out of Howard Chaykin’s latest Image yarn, The Divided States Of Hysteria. I’m sympathetic to every single concern that’s been raised about this book, but I respectfully disagree with all of them. “That cover” for issue number four was never gonna really hit the shelves, and offers no proof whatsoever of racism on Chaykin’s part — but offers plenty of proof that he learned a lot from the “B-“movie hucksters of his youth, most notably William Castle and Herschell Gordon Lewis. And that scene in the first issue? The one that was variously described on twitter by “concerned citizens” who’d never even seen the book as featuring “a trans woman being raped” or even “a trans woman being murdered”? It featured no such thing, and indeed depicted a trans woman (who has since emerged as the only thing even vaguely resembling a “sympathetic” character in this series) fighting off and killing her would-be attackers herself! Other, somewhat less hysterical, complaints said that it was the kind of scene that reinforced the “trap defense” that assailants and/or killers of trans sex workers can apparently (and sadly) still get away with using, but again, these gripes are equally misguided given that Chaykin explicitly takes aim at what an absolute crock of shit the “trap defense” is in his character’s interior monologue during the scene. I’ll absolutely grant you that this comic is every bit as ugly, mean-spirited, amoral, and confrontational as its critics charge — but that’s the whole fucking point! In any case, for my money Chaykin and master letterer/designer Ken Bruzenak are absolutely killing it on this title, and any of my fellow leftists who walked away from it (or, more than likely, never even gave it a shot) are missing a thorough-going critique of the private prison and private security (let’s just call ’em what they are, mercenaries) industries, homophobia, transphobia, Islamophobia, racism, the so-called “War On Terrorism,” macho bullshit in general, and other noxious societal ills. It’s all about as subtle as a kick to the crotch, and it’s incredibly garish to look at, but I love it. The story ran in place a bit last issue, but everything kicks into overdrive here in number five. 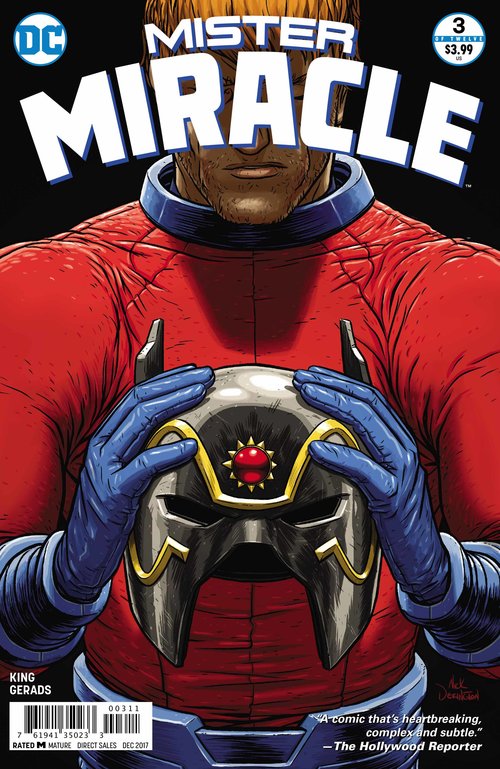 On the “Big Two” front, the third issue of Tom King and Mitch Gerads’ much-fawned-over Mister Miracle hit this week, and while I’m on the record as saying I think that a lot of the hype is overblown, it’s still pretty damn good — and “pretty damn good” is worth $3.99 a pop, in my book. Orion’s in full-on “asshole mode” here, Scott Free learns he’s a hero to The Bugs, and Barda is just doing her level best to survive both the biggest goddamn cosmic war ever (this week, at any rate) and her husband’s neuroses. But, of course, the key question remains — how much of this is actually happening, and how much is all in Scott’s head? And speaking of heads, Granny Goodness no longer has one. Apart from Joe Casey and Nathan Fox’s criminally-underappreciated take on Captain Victory And The Galactic Rangers, this is the best of the Kirby revivals that have become a downright ubiquitous feature at the shops in recent years.

Okay, whew! Lots of heavy-duty opining this time out! Next week we’ve got a couple that showed up too late for me to get around to this time out that I’m really looking forward to, Sophia Foster-Dimino’s Sex Fantasy, and sweet-looking new UK sci-fi anthology Berserker. Plus whatever else strikes my fancy. If this column hasn’t landed me on your “shit list,” then I’ll look forward to seeing you in seven days!