And so we’ve arrived at this, our final — and, I’m sure for some, most significant — “best of” list of the year, surveying 2017’s top 10 graphic novels. Quick reminder of our “house rules” : these have to be original works designed from the outset for the GN format, not collected works of any sort, which have already been covered on our contemporary and vintage collected editions lists — and, as always, no real “reviews” here (chances are I’ve reviewed most, if not all, of these somewhere or other online already), just quick summaries of why they’re all so fucking awesome. Okay, let’s do this!

10. Vague Tales by Eric Haven (Fantagraphics) – Long one of the most intriguing, if sporadic, cartoonists around, here Haven constructs a fascinating and surreal overarching story from mostly-silent vignettes featuring barbarians, super-heroes, sexy sorceresses, and monsters that borrow equally from Jack Kirby, Fletcher Hanks, Winsor McCay, and Charles Burns — then he throws it all into a blender, cranks it up to “high,” and serves up something utterly unique, yet somehow eerily (hell, vaguely) familiar. We know all the elements at play here, but have never seen them combined in this fashion.

9. Old Ground by Noel Freibert (Koyama Press) – Amorphous, inky black shapes that coagulate, coalesce, dissemble, and reconstitute themselves at both will and random are the primary visual motifs Freibert employs in this bizarre, humorous, at times even touching tale of gentrification looming down upon a haunted graveyard. Nothing is steady or predictable in this world, every new panel an uncertainty waiting to reveal itself to readers and, it seems, artist — and while a fluid and organic work focused on death and decay may sound like a contradiction at first, it all works superbly and there’s a very real sense that this story is almost making itself up as it goes along.

8. Cartoon Clouds by Joseph Remnant (Fantagraphics) – I thought another art school memoir was the last thing needed in both the “alternative” comics scene and, quite frankly, my life, but Remnant hooked me within a few pages with his crisp dialogue, smart characterization, and meticulous linework — and once he got those hooks in, he didn’t let go. A deliriously authentic “coming-of-age” tale that anyone who’s ever been in their early twenties and at loose ends can relate to easily and completely. 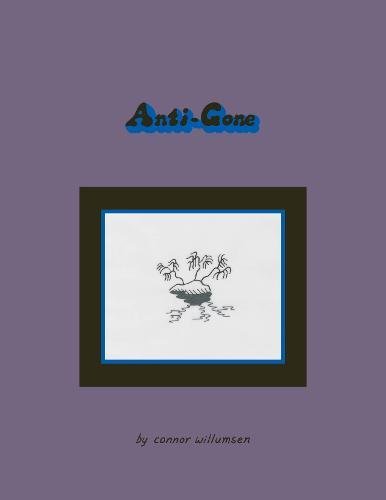 7. Anti-Gone by Connor Willumsen (Koyama Press) – A post-apocalyptic tale like no other that takes dead aim at any number of targets — environmental degradation, hyper-capitalism, youthful lethargy, mass consumerism, virtual realities — and hits them all with stylish minimalist efficiency, Willumsen’s book demands that you spend time looking at it from multiple angles, then trusts you to make up your own mind. Supremely assured stuff that not only requires you to meet it on its own terms, but challenges you to figure out what those terms even are. 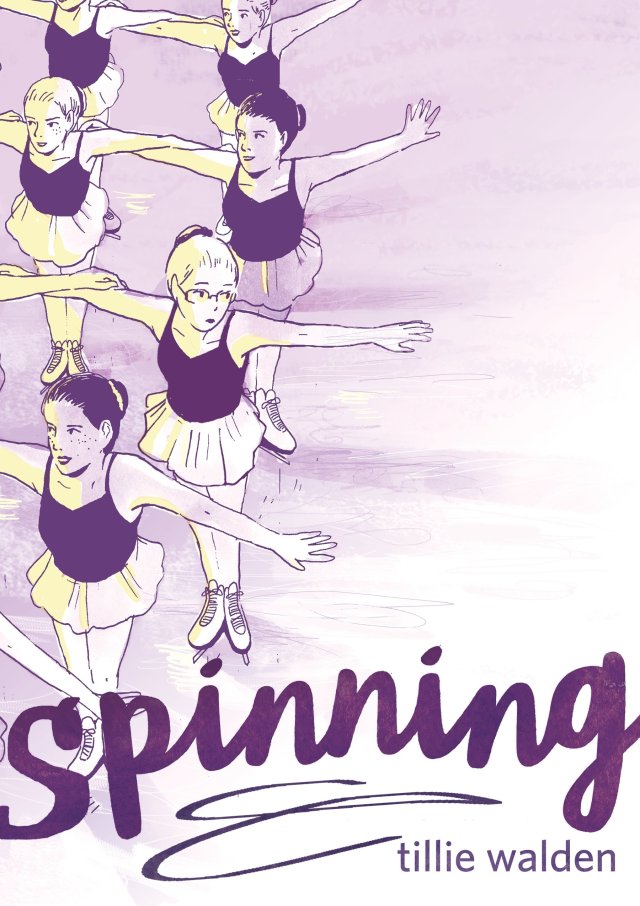 6. Spinning by Tillie Walden (First Second) – The “big breakthrough” from an artist who’s been edging toward one for the past couple of years is here, and Walden’s memoir of her formative years — with a special focus on her figure skating education, hence the title — fully delivers on the promise of her previous works, plus interest.  As confident as it is inventive in its visual narrative, this is a powerfully understated shot across the bow from a 21-year-old cartoonist seizing her moment for all it’s worth. If you want to know who’s going to be making the most talked-about comics for the next decade (or more), look no further.

5. Crawl Space by Jesse Jacobs (Koyama Press) – Bursting with kaleidoscopic imagery and psychedelic imagination, Jacobs’ third graphic novel for Annie Koyama continues his ascent toward the throne of contemporary visual storytellers with more envy-inducing sheer originality than ever. This tale of a washing machine that serves as a gateway for children to a Narnia-esque fantasyland may have universal cautionary themes at its core, but the manner in which they’re conveyed is absolutely singular in nature. Taste the rainbow. 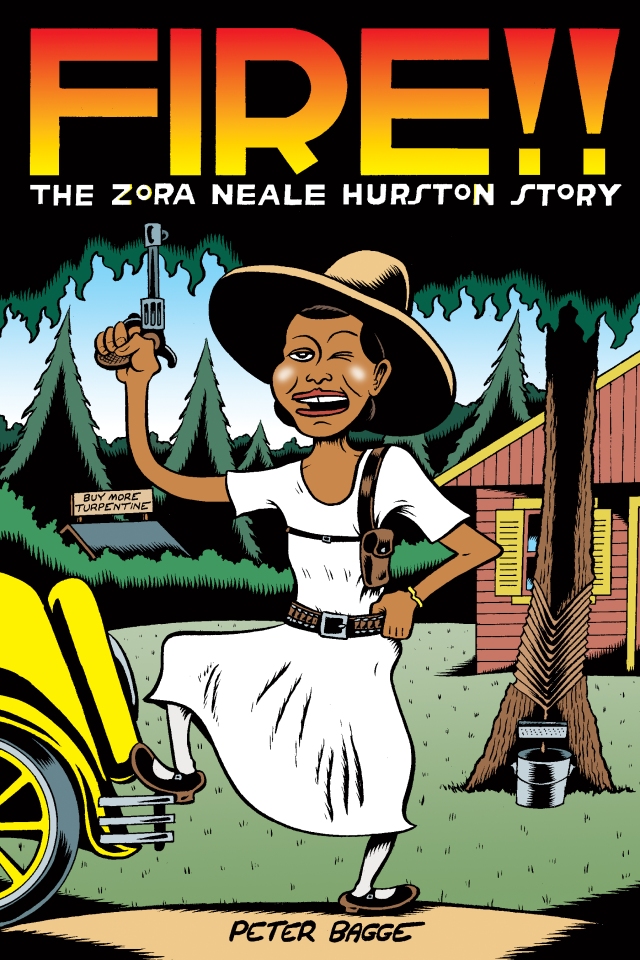 4. Fire!! : The Zora Neale Hurston Story by Peter Bagge (Drawn+Quarterly) – When a cartoonist sells his fucking house in order to finance his work on a project, you know he’s committed to it, and Bagge’s dedication to an authentic recounting of the life of the most interesting, and criminally overlooked, of the “Harlem Renaissance” authors certainly pays dividends to his readers. Did you ever think that the guy behind Neat Stuff and Hate would become the premier graphic biographer of his generation as the “third act” of his already-storied career? I’ll freely confess that I didn’t see it coming, but now that it’s here, I have to admit that I’m even more interested in seeing who Bagge’s next subject will be than I was in finding out whether Buddy and Lisa were going to kill each other or live happily ever after.

3. Everything Is Flammable by Gabrielle Bell (Uncivilized Books) – Long the reigning royalty of diary cartooning, here Bell weaves her daily visual journals into a poignant rumination on the mother-daughter relationship that’s fraught with tension, tumult, toil, and tenderness, the fine line between polite civility and the raw nerves underlying it always mere centimeters away from being crossed, maybe even tripped over. Proof positive that reality is infinitely more complex than anything fiction can dish out.

2. The Customer Is Always Wrong by Mimi Pond (Drawn+Quarterly) – The second of Pond’s “Imperial Cafe” memoirs sees the dark storm clouds of the 1980s gathering over the heads of her ensemble (out)cast(s), but never fear — the whimsy, the moxie, and the heart we first saw from everyone in Over Easy haven’t gone anywhere — and deep reserves of each are going to be needed in order to get through all that’s coming. Sooner or later life takes us all in different directions, but letting go of people, places, and even stages of existence is never easy, is it? And while Pond’s book may be about coming to terms with endings we don’t want to see happen, we should all be damn glad that she’s still working through the implications of this particular phase of her life some 30 years later — heck, by the time this book is over, you won’t be ready to say good-bye to it any more than she is/was. Most comics are lousy, plenty of comics are good, a few comics are great — but this comic? This one’s pure magic. 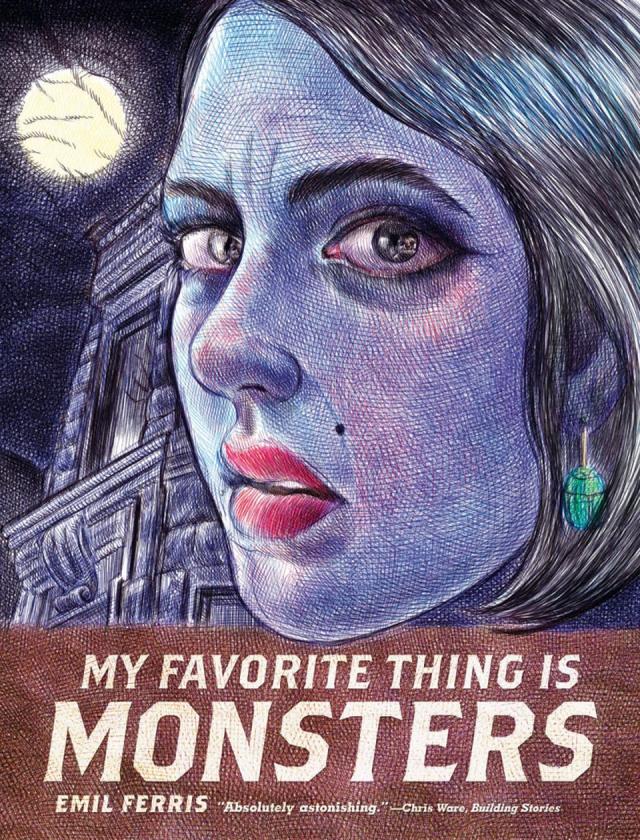 1. My Favorite Thing Is Monsters Vol. 1 by Emil Ferris (Fantagraphics) – Most cartoonists show up on the scene with a pretty steep “learning curve” ahead of them, and that’s all well, good, and to be expected — but once in a great while lightning strikes and someone arrives “fully formed.” Never, though, have I seen anyone do what Emil Ferris has done here — break into this still-maligned medium of ours with a work that’s light-years ahead of what pretty much anyone and everyone else is doing. By now you’ve read all the raves about her book and seen it atop more or less everyone’s “best of the year” lists — but, if anything, this sprawling and multi-layered tale that’s part youthful memoir, part mystery, part family drama, part Chicago history, and part love letter to Universal’s “Monster Era” has so far been underappreciated for all that it both represents and is. Consider : 15 years ago the West Nile Virus left Ferris unemployed, broke, raising a child on her own, and temporarily paralyzed from the waist down. Today, she’s the author of the best and most important graphic novel of the 21st century (at least to date) — and she drew it entirely with Bic and Flair pens. Permission to be in awe? Fully granted.

And on that note — we’re done here. Go forth and read ye some great comics.