How’s everyone’s holiday season going? Is your schedule brimming over with last-minute shit to get done? Or do you actually have time to do some reading? If so, here’s some new stuff you can find at your local comic shop, or via mail order, all of which (for better, worse, or somewhere in between) drew my attention over the course of the past week —

Assassinistas #1 is the opening salvo of a new six-parter from Shelly Bond’s Black Crown imprint at IDW. Writer Tini Howard’s name is one I confess to being unfamiliar with previously, but a quick glance at her CV shows that  she’s most recently worked on a couple of re-launches for decidedly second-tier Image properties Hack/Slash and The Magdalena — and now she’s jumped right to the head of the class by landing a gig co-creating a series with Gilbert Hernandez. This old/new mix seems to be something Bond is quickly establishing as her label’s MO (veteran writer Peter Milligan, for instance, is teamed with relative newcomer artist Tess Fowler on Kid Lobotomy), and I’m all for it — especially when the results are this good.

Howard’s script could use a bit of fine-tuning, it’s true — it’s equally split between flashback and present-day sequences and the transitions between one and the other aren’t always entirely clear — but on the whole her ensemble cast is well-defined and likable, and the story momentum gets rolling right away as one of her gang of female former assassins, now in the business of selling something called “kidnapping insurance,” is forced back into action after one of her ex- colleagues’ kids is snatched and the suspicion immediately falls on her given her new line of work. And speaking of rushed into action, her college-age son and his boyfriend find themselves conscripted into this impromptu rescue mission largely because, hey, no one else is around to lend a hand, and because I guess there’s nothing like passing on hit-man (or hit-woman) job skills to the next generation.

All in all, then, not a bad set-up, and needless to say Beto’s art is top-notch — and special points to colorist Rob Davis, whose palette would look right at home in the pages of Love And Rockets (if it weren’t, ya know, a black-and-white ‘zine), and letterer Aditya Bidikar, who mimics Gilbert’s own lettering style more or less absolutely perfectly. So far this is easily the best thing to come out of Black Crown, and well worth your $3.99.

X-Men : Grand Design #1 is the first of a two-part comprehensive re-telling/revision of the early years of Marvel’s premier Mutant team courtesy of the great Ed Piskor. If you dug Hip Hop Family Tree, this is very much in that same vein, only this time around the subject of Piskor’s “cartoon documentary” is, ya know, entirely fictional. Apart from that, though, the aesthetics are much the same — pre-yellowed heavy newsprint-style paper stock, muted colors interspersed on occasion with pop-off-the-page bright whites, densely-worded pages (each, in fact, much like a stand-alone Sunday full-page comic strip), and pitch-perfect characterization employed as a counter-balance to the over-arching theme of summarization. I’ll divulge no more at this point since odds are good I’ll do a full review of this series after the second issue comes out (in just two weeks!) — suffice to say you get plenty for your $5.99 from this book, and hey, I think this is the first time a writer/artist has ever been credited as a “cartoonist” in a Marvel comic. Killer stuff that I’d been looking forward to ever since it was first announced, and Piskor has more than lived up to my lofty expectations. 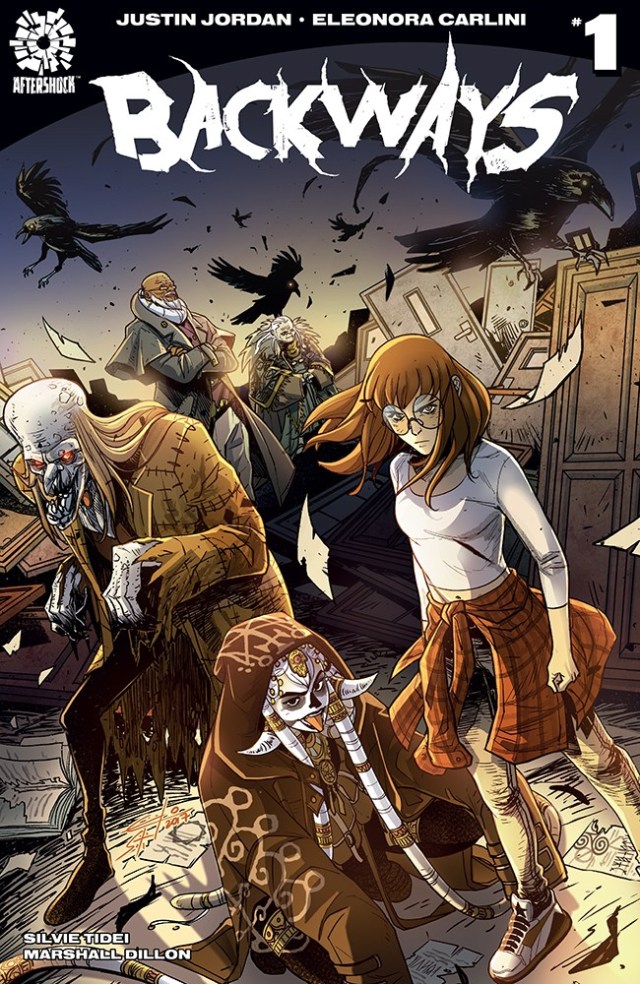 Backways #1 marks the start of another new Aftershock series from perpetually-busy writer Justin Jordan, here joined by promising new talent Eleonora Carlini on art. The titular Backways is a Narnia-esque shadow world of magic and mystery running parallel to our own, and when her best friend/possible lover disappears into it, protagonist Anna Merrick has to cross over herself, aided and abetted by the dimension-jumping Coyote Bones (great name) — who knows her way around, sure, but is also something of a pain in the ass who might be more trouble than she’s worth. Hollywood-ready fantasy usually isn’t my thing, but Jordan, who can be painfully inconsistent, really seems to be on top of his game here, the “world-building” is smart and unfurls at just the right pace, and Carlini’s admittedly populist, fan-friendly art is a fantastic match for the script. Fun, brisk, highly addictive stuff that feels very much like it’ll give readers their $3.99’s worth, month in and month out, for as long as it lasts — which hopefully will be some little while.

Any and every new Dash Shaw project is worth checking out in my opinion, but for some reason I missed out on his latest mini-comic, New Jobs, when it was released by Uncivilized Books earlier this year. Still, better late than never, and in this case the emphasis on that phrase should definitely be on the “better.” Shaw employs a tight, fluid, no-frills style on this comic that’s absolutely perfect for the very human-level story he’s telling about a Bed-Stuy couple that takes on a pair of  — uhhmmm — interesting new gigs in order to support the baby that they’ve just found out they’re about to have. Heartfelt, humorous, and visually interesting (good call on the varying colors of paper stock), this book represents a fine distillation of everything that makes Shaw such a special talent. Five bucks is little steep for a 32-page mini, it’s true, but you’re almost certain to read this twice back-to-back right off the bat, and to find yourself drawn back to it quite frequently in future. Truly a sublime little book that perfectly conveys the realities of being an expectant parent in today’s hyper-expensive Brooklyn. Get it from the publisher at http://www.uncivilizedbooks.com/comics/new_jobs.html

Okay, that’s a wrap for this week, hope you’ve found a couple of things that pique your interest and won’t leave your wallet too empty — have a terrific Christmas (or whatever equivalent holiday you celebrate in your home), and we’ll see you in seven for our final weekly round-up of the year!