The first involves the pathetic aging hipster pictured above, who you’ve probably already guessed, based on his appearance alone, works for Vice. In fact, he’s their art editor, and his name is Nick Gazin. Before we go any further, take a look at this lazy fucking column he wrote : https://www.vice.com/en_us/article/paqaxk/the-ten-best-comics-of-2017

You’re back? Okay, good. Yes, according to Mr. Handlebar Mustache, only eight good comics came out in all of 2017. Three of them were reprints. One was a stapled-together selection of sketchbook doodles. Two were issues of Love And Rockets. In Gazin’s own words, almost everything else was “mostly worthless garbage.”

No, buddy, you’re describing yourself. Putting aside the fact that anyone with a waxed ‘stache — and for proof of this look no further than noxious Vice co-founder/racist nationalist Gavin McInnes — is a complete asshole, and that the site itself has recently been “outed,” to no one’s surprise, as a rat’s nest of sexual harassment and Trump-style “locker room” behavior, Gazin’s “best-of” list is proof of the calicified taste and fossilized sensibilities of a guy who can’t be bothered to read the work of new cartoonists and who mainly views comics as some sort of “security blanket” good only for wrapping himself in the nostalgic glow of either a) his childhood, or b)his early twenties. Comics have moved on, and Nick Gazin can’t handle it.

How fucking typical of Vice, is it not? No longer the “enfants terrible” they once were, their writers are desperately clinging to youth by stating, en masse, that they may be on the other side of 40, but goddamnit, they’re the youngest curmudgeons in the world. You can find more upbeat takes on life in a fucking hospice ward than you can on that site — but at least the old-timers on their last legs don’t give a shit whether or not anyone still thinks they’re cool. And “cool” — specifically, a dated version thereof — is what Gazin’s list is all about. Simon Hanselmann is a pretty good cartoonist, sure, but his shtick is extremely repetitive at this point, and One More Year is far from the best comic of 2017. In fact, it’s basically the same book his previous two were. The Hernandez brothers are still fantastic and very deserving of any spots they get on anyone’s list for any reason, but we do need to be honest and admit that their work is incredibly self-referential at this point and more or less impenetrable to anyone who hasn’t been immersed in it for a couple of decades. Johnny Ryan is basically another, more gleefully vulgar, version of Hanselmann, in that he’s a guy who’s carved out a certain territory and stays well within it. The inclusion of a big, fat collection of thoroughly mediocre Amazing Spider-Man reprints feels like a sop to super-hero fans, who actually get more credit in my book than Gazin does because at least they admit that their reading sensibilities remain stuck at the level of 14-year-olds and they don’t expect “cool points” for being a bunch of dorks. The Will Elder reprint book? Okay, that’s a solid call any way you slice it, as is the inclusion of the latest issue of Sammy Harkham’s Crickets, but that Jay Disbrow book? Sorry, that should be worthy of note, but Craig Yoe’s books are complete garbage. He rushes pages of old comics through his scanner, no re-mastering (or even basic “touch-up”) work is done to them, his introductions betray little to no knowledge of the work he’s collecting, and the “fun, wacky” packaging of his product is capable of reducing even the best work to looking and feeling like cheap, throwaway shit. I respect the hell out of Disbrow’s pre-Code horror comics, and that’s precisely why I’ll never buy this book — in fact, I feel sorry for the guy that a low-rent huckster like Yoe is the first to collect his stuff. He deserves much better.

Now, unlike the typical “wanna-be-edgy” Vice reader, I’m not gonna suggest that Nick Gazin needs to die, or that he should kill himself, or any other over-the-top bullshit like that. I don’t think anyone with any sense would mourn his passing if he were to shuffle off this mortal coil, but the most I’d like to see happen to him in terms of harm is for someone to wipe that “perma-smug” expression off his face — and that wouldn’t even actually constitute “harm,” it would constitute an improvement. Hell, I don’t even want to see him lose his job as art editor. We all gotta eat. But I do think he should be retired from his position as a comics critic and that Vice should hand that gig over to somebody who actually keeps up with what’s happening in the medium. I don’t think that Gazin is even more than aware-in-passing of the work done this year by Emil Ferris, Tommi Parrish, Gabrielle Bell, November Garcia, Keiler Roberts, Jesse Jacobs, Tillie Walden, Julia Wertz, Ben Passmore, Alex Graham, John Porcellino, Jillian Tamaki, Mimi Pond, Michael DeForge, Anders Nilsen, Connor Willumsen, Noel Freibert, Joseph Remnant, Tim Lane, Eric Haven, Anya Davidson, Eleanor Davis, Aaron Lange, Tom Van Deusen, Dominique Goblet, Charles Forsman, Benjamin Marra, Michel Fiffe, or any number of other cartoonists who busted their asses, usually for little or no money, to put out great comics in 2017. Hell, even the fact that Peter Bagge and Gary Panter released major new works seems to have escaped his notice.

Either that, or he saw and read all of their stuff and thought it was “mostly worthless garbage.” In which case, he has no idea what he’s talking about, or else his critical sensibilities are so deeply buried underneath his forced “contrarian” persona (which is no doubt as cynically calculated as everything else about his whole nauseating shtick) that he’s no longer an “honest broker” of opinion.  If that’s what’s going on, then Vice doesn’t need to find a new comics critic who keeps up with the medium, but one who actually respects it. Whatever the case may be, Nick Gazin clearly isn’t the man for the job. So, one more time for good measure — fuck you, buddy. And shave that stupid thing off your face while you’re at it.

From maddening news to saddening news, the other development that necessitated a last-second shift in focus for this column was when word came down the pipeline that the great British comics artist Jim Baikie passed away at the age of 77 yesterday. Baikie was a true lion of the UK scene whose work exemplified the mix of solid craftsmanship and just a little bit of grit that made 2000 A.D. so visually exciting and arresting in its early years, but he also brought a keen eye for panel design and page layout to his efforts that helped set them above many of his contemporaries. In short, he was a “pro’s pro,” but also had vision and inventiveness to spare, as these pages from what is, for my money, his finest series, New Statesmen, more than ably demonstrate : 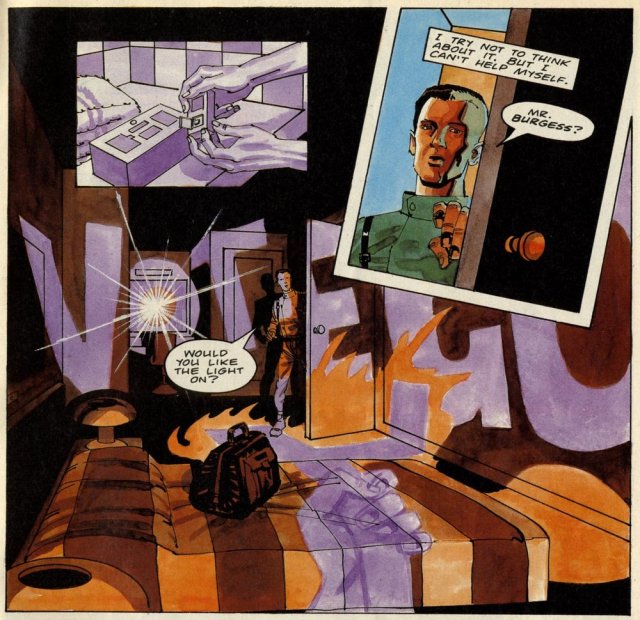 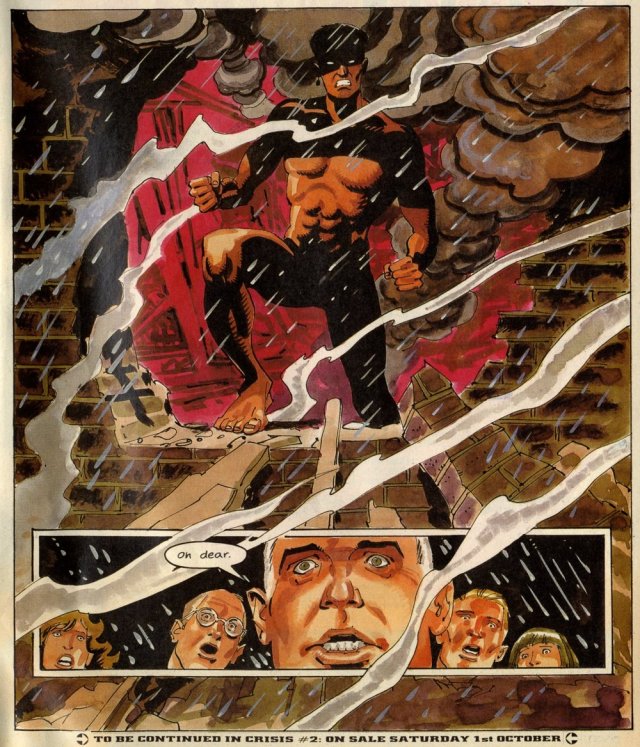 That’s some straight-up dynamic stuff there, any way you slice it. Baikie is probably best known to American audiences for his collaborations with Alan Moore on Skizz, a superb two-part Vigilante story, and the First American strip in ABC’s Tomorrow Stories, but also had some fairly high-profile assignments at DC as a fill-in artist on Detective Comics, Batman, and The Spectre, and co-created the Electric Warrior mini-series with writer Doug Moench, in addition to writing and drawing Skizz II and Skizz III after Moore flew the 2000 A.D. coop — and incidentally, Skizz was collected in its entirety in TPB last year, and this decidedly British working-class take on the E.T. premise holds up remarkably well.

As already stated, though, for me Baikie’s finest hour came on New Statesmen, which originally ran in the pages of Fleetway anthology Crisis before being collected in “deluxe” format single-issues and as a now-OOP trade paperback. The brainchild of Baikie and a then-young John Smith (himself a criminally underappreciated, visionary talent), the intellectually lazy dismissed this strip as simply another in the vast array of Watchmen-esque “what if super-heroes were real?” stories flooding shelves in the late ’80s and early ’90s, but it was, in actuality, a smart, articulate, high-concept comic filled to bursting with intricately-considered ideas, seamless “world-building,” rich prose, strong characterization, memorable dialogue, and wonderfully inventive illustration. One of the best things to ever come out of the “mature readers” boom, and well worth tracking down. So do it! — and thank you, Jim, for everything. Our normal “Weekly Reading Round-Up” will return in seven days, so until then, Happy New Year one and all, see you on the other side of the calendar!