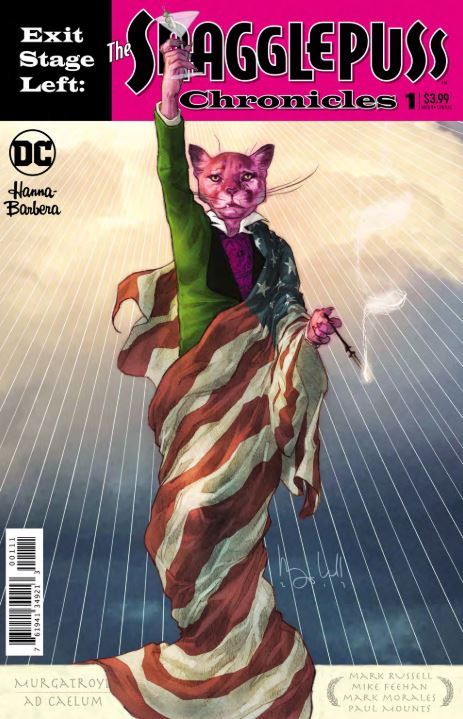 Happy New Year everyone, hope your 2018 got off to a rousing start, certainly the comic-book world seems primed to have a good year if the way things have started off is any indication —

It’s no secret to anyone following my writing, here or elsewhere, that DC’s line of licensed Hanna-Barbera comics has been something I’ve been singing the praises of pretty much since they made their debut nearly two years back, and trust me when I say that no one’s more surprised about that than I am given that most of these cartoons hold precisely zero nostalgic value for me and the overwhelming majority of DC’s publishing output is creatively worthless. Still, the free reign they’ve been giving to some of their best freelancers to “re-imagine” these moribund properties has paid off big time, and to date the absolute cream of the crop has been Mark Russell and Steve Pugh’s The Flintstones, a 12-issue examination of decidedly modern social, economic, and political challenges filtered through a disarmingly charming pre-historic lens that offered some of the most smart, hilarious, and heartwarming stuff we’ve seen in any “Big Two” comic in, quite literally, years. In my “Top 10” ongoing series column of last year (okay, that still only means last month) I said that more than a simple Bedrock redux the book was actually a spiritual heir to Howie Post’s sublime Anthro, and I stand by that claim 100%. I was genuinely sad to see it come to an end. And yet —

Russell quickly transitioned over to another Hanna-Barbera book, and if anything, Exit Stage Left : The Snagglepuss Chronicles #1 is an even stronger debut than The Flintstones #1 was. The set-up here is as obvious as it is genius : Snagglepuss is essentially Tennessee Williams, a celebrated gay playwright in the repressive early 1950s, and draping his exploits against the backdrop of HUAC and the “Red Scare” both grounds events in historical reality (even if a few liberties are taken) and offers the chance for cameos from the likes of Dorothy Parker and Lillian Hellman to actually work within the context of the story rather than being mere attention-grabbers. The scene at the start of a couple out for a big night on the town ends up having a decidedly “gallows humor” punch-line to it at the end when it turns out that they’re dressed to the nines to witness the execution of Julius and Ethel Rosenberg, so yeah, as always, Russell is pulling no punches here and wearing his politics right on his sleeve — and I say good for him, and fuck the small handful of square right-wing “critics” who have been trashing this book online. This is a comic with a heart as big as its brain and if you don’t like stories that present an actual point of view, shoot — there are roughly a hundred other DC books for you to choose from this month that are cowed, derivative, completely vapid slug-fests. Go read any of them. Hell, go read all of them. Let those of us who actually value relevance enjoy this rare foray into it from a major publisher. And hey, icing on the cake — the book looks great, too. Penciller Mike Feehan draws with a clean line that’s a nice blend of “cartoony” and realistic, inker Mark Morales does a faithful job on embellishments, and superstar colorist Paul Mounts utilizes a lavish, multi-toned palette that makes every panel look like a million bucks. Not only is it a fairly safe bet that DC won’t put out a better book this year, it’s a fairly safe bet that very few comics, period, will be this good. I’m bummed it’s only scheduled for a six-issue run, but heck — I’m ecstatic that it even exists at all. Proof positive that great things can still emerge from highly unlikely sources, and the best four bucks you’ll spend this week, if not this month. Shit, maybe even this year.

And yeah, it just occurred to me that I may end up eating those words, but you know what? I kind of doubt it. I know I’m probably losing a ton of credibility in the eyes of a lot of people I respect by saying this, but I have to call ’em like I see ’em, and Exit Stage Left : The Snagglepuss Chronicles is straight-up brilliant. And that’s a term I never use lightly.

Keeping our “Big Two” theme going, we also got the second issue of Ed Piskor’s X-Men : Grand Design this past Wednesday, and for my money (specifically, for my $5.99) it’s every bit as good as the first, maybe even moreso, as we dive pretty deeply into the some of the weirdest areas of X-history (Lucifer and all that) this time out. The story here is way more involving than a historical re-hash should be, the art’s terrific, the colors are eye-popping, the book’s production values are first-rate, and it’s more than fair to say this big experiment from Marvel has absolutely paid off. Piskor will be back this summer for his second go-’round (likewise comprised of two over-sized — and no doubt jam-packed — issues), and you’d better believe I’m counting down the days already.

Alright, let’s get to the small press since that’s still, in theory, what this site’s all (okay, mostly) about : I got a copy of Simon Hanselmann’s 16-page newsprint broadsheet Performance this past week, and this thing is absolutely gorgeous. Clocking in at a whopping 15″x 22.75″, this selection of exquisite full-color gallery paintings of Megg, Mogg, Owl, Werewolf Jones, Booger and the gang showcases Hanselmann at his best, and couldn’t come at a better time considering that I number myself among those who think that his shtick has gotten more than a bit stale as the years have gone on. Maybe the fact that this is an “all-art” publication that features none of his repetitious, dead-end “stories” is just what I needed to remind me of why I initially loved his stuff so much seven or eight (or whatever) years ago? I dunno, but whatever the case may be, this is as pleased as I’ve been with a Hanselmann project at any point since Megahex first came out. Yeah, I still think it’s well past time that he tried his hand at something new, but unless and until that day comes, this is $8.00 very well spent. Get it from the publisher, Floating World Comics, at http://floatingworldcomics.com/shop/comic-books/performance-by-simon-hanselmann 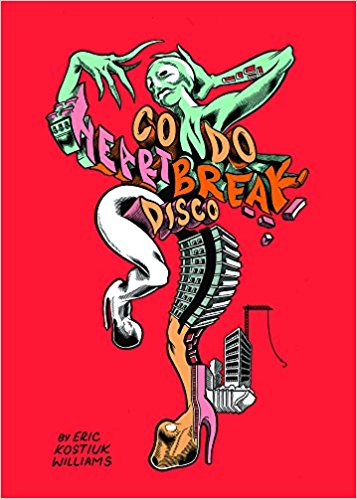 I got on the Eric Kostiuk Williams train late, first encountering his work in his late-2016 Retrofit/Big Planet release Babybel Wax Bodysuit, and I’m getting to his newest offering — the Koyama Press-published Condo Heartbreak Disco — late as well, given that I guess it actually came out a few months ago. Well, sorry, but I didn’t buy a copy until the other day — but fortunately, it was worth the wait, even if I didn’t know I was waiting for it. At 48 pages of story and art it’s probably not fair to call this a “graphic novel” per se, but it’s nevertheless a dense (visually and narratively) story, centered around “purveyors of socially-motivated revenge and personal guidance” Komio and The Willendorf’s Braid as they attempt to save Toronto from an onslaught of high-end “luxury” housing that is, quite literally, decimating once-vibrant neighborhoods and communities. A decidedly camp-infused and “snarky” anti-gentrification fable/superhero parody mix, this book is illustrated in Williams’ highly fluid (hell, borderline anarchic), richly-detailed style, and his page layouts are as incredibly inventive and free-flowing as his plot — or, for that matter, his protagonists’ identities. Things happen at full-throttle speed here, but the eye is guided through the pages in such a graceful, naturalistic manner that you won’t even know that you’re not being given time to catch your breath, and for a book centered around buildings and structures, it sure feels — and looks — incredibly organic. Yeah, I lament the fact that Williams is working is black and white here since he’s one of the strongest cartoonists out there when it comes to his use of color, but that’s a small gripe in the scheme of things when art and story both are this unique and confidently-realized. Cover price is ten bucks, but I wouldn’t feel bad about paying twice that, truth be told, and it’s not too hard to find it from unnamed major online retailers for even less.

Okay, that’s the first week of 2018 down! See you all in seven short days as we go over whatever week two has — or, by then, had — in store!