Would’ja believe — there wasn’t too much that came in my mailbox this week and it was my LCS that kept me busy with new stuff to read? I swear, it’s true, so let’s have a look at some items of note that I picked up —

For a series/line that prides itself on being “old-school,” Josh Bayer’s All-Time Comics seems in some ways to hew pretty closely to modern publishing norms. Issues frequently ship late, for instance, and their latest release, the bumper-sized (and subsequently more expensive than usual) All-Time Comics : Blind Justice #2, marks the end of the first “season” of the range, with an Image-style gap of three or four months now on deck as they get their ducks in a row for their next not-exactly-an-arc. The script this time out is a Bayer solo endeavor, and frankly not the greatest — the last half of the comic essentially being an extended “bad guy rant” — but it’s still kinda “warts and all”-style fun that will appeal to most Bronze Age babies like myself by hitting all the right nostalgic notes. It’s really down to the art to essentially carry most of the weight here, though, and weird as it sounds to even say things like “Noah Van Sciver inked by Al Milgrom” and “Sammy Harkham variant cover,” that’s precisely what you get here, and it’s every bit as awesome to look at as said phrases would lead you to expect. I have no doubt that the overall ATC project will continue to confound readers looking for some over-arching unifying grand purpose, as it appears that Bayer and co. really don’t seem to have one, but for my money that’s a large part of the appeal of what they’re doing, and even though I’m sure admitting as much will brand me an intellectual simpleton in the minds of many in the critical community, I’m seriously looking forward to seeing where this whole thing goes next, as regulars like Benjamin Marra return to the fold and newcomers like Gabrielle Bell (yes, you read that right!) join in the four-color carnage. Operating in a previously-unexplored middle ground that exists between the polarities of “homage” and “spoof,” these comics are hitting a “sweet spot” for me — even when they run six bucks, as this one did. 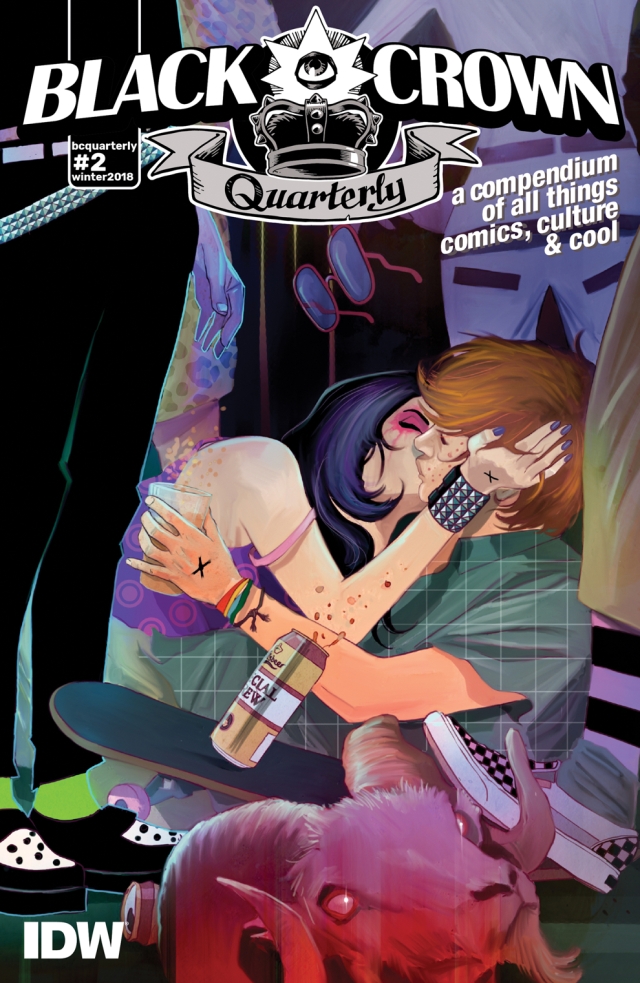 It’ll cost you seven, though, to pick up the second issue of Shelly Bond’s Black Crown Quarterly, and to be honest, I think I’ve seen enough at this point. The format’s nice, with heavy cardstock covers and high-quality glossy paper, and to be honest, most of the individual strips range in quality from “pretty decent” (Rob Davis’ “Tales From The Black Crown Pub,” Jamie Coe’s “Bandtwits,” Leah Moore and Nanna Venter’s “Hey, Amateur! How To Be A Badass Goth In Nine Panels”) to “actually quite good” (“Cannonball Comics” by Christopher Sebela and Shawn McManus, who illustrates in a very engaging and eye-popping style quite unlike anything he’s ever done), but the “Cud : Rich and Strange” ongoing by Will Potter, Carl Puttnam and Philip Bond continues to be a dud, the inclusion of more preview pages for David Barnett and Martin Simmonds’ forthcoming Punks Not Dead make me wonder if we’re not going to end up seeing the entire first issue before it even comes out, and the text pieces are either essentially extended promo blurbs for other Black Crown titles like Kid Lobotomy, or else self-consciously “hip” music and travel recommendations. What frustrates most about BCQ, though, is that Bond’s hopelessly dated tastes and aesthetic sensibilities end up making the overall package less than the sum of its parts, and at the end of the day it almost feels like she’s assembling a comic for an audience of one — herself. Unless you, too, are an anglophile whose musical knowledge doesn’t extend beyond the borders of late-’70s UK punk, it’s hard to see the appeal in an anthology this specifically — and rigidly — constructed. Gotta love the pull-out poster featuring the Bill Sienkiewicz cover variant for Punks Not Dead #1, though.

In what passes for a “bargain” this week, five bucks will get you in the door of Justice League Of America/Doom Patrol Special #1, and while it’s not a spectacular read or anything of the sort, I did have fun with this first part of “Milk Wars,” a five-part weekly crossover that sees Gerard Way’s Young Animal line clashing head-on with the “proper” DC Universe. Way and Steve Orlando wrote the script for this book, and thematically and tonally it seems pretty well right in line with what the My Chemical Romance lead singer is doing with his main Doom Patrol series, in that it borrows equally from Grant Morrison’s run on the book and Larry Cohen’s cult-favorite horror/comedy hybrid The Stuff. I don’t know much about the current Justice League Of America line-up, but it appears to be a bunch of B-and C-list characters like Lobo and Vixen, so I guess re-casting them all as a 1950s neighborhood decency brigade is no particular skin off DC editorial’s back, and for the purposes of this story the conceit works — as does ACO’s frenetic, mildly psychedelic art. Perhaps even better than the main feature, though, is the two-page backup strip, which begins what I’m assuming will be an extended introduction to the character of Eternity Girl, who will soon be featuring in her own series courtesy of this story’s creators, Magdalene Visaggio and Sonny Liew. I’m as shocked as anyone to see a cartoonist of Liew’s caliber taking on an assignment for DC, and equally shocked that he wouldn’t just write it himself since that’s how he’s made his bread and butter previously, but if this brief Silver Age-style yarn is any indication, he and Visaggio should make a good team. Anyway, all in all, this comic stood head, shoulders, and udders (read it and you’ll get what that reference is all about) above most “Big Two” fare.

Lastly, we come to Motehrlands #1, the first of a new Vertigo six-parter from writer Simon Spurrier and artist Rachael Stott that proudly wears its 2000AD influence on its sleeve and isn’t afraid to plunge you in at the deep end from the get-go and trust that you’ll catch up — at some point. The action’s pretty breakneck in this one, though, and absolutely absurd, so don’t expect much hand-holding in this wild mash-up of badass-bounty-hunter, “reality” TV, and dysfunctional family tropes, our main protagonist being an inter-dimensional mercenary skip-tracer who lures her mother, a sort of washed-up female version of that “Dawg” guy, out of retirement in order to help track down the third member of the clan, the good-for-nothing brother/son. It’s a fast-paced and — here’s that word again — fun read, and Stott’s art is a nice mix of the conventional and the far-out, so I’m probably gonna stick it out in single issues, but if you missed the first installment, “trade-waiting” probably wouldn’t do you any harm, and will more than likely save you a few dollars.

Okay, I think that’s good enough for now — the small-press stuff was in short supply this week, which is kind of a bummer, but I’ve got a box on the way from Retrofit any day now of some comics I missed out on from the tail end of 2017, so hopefully I’ll have read enough of those books by this time next week to talk about at least some of them in my next round-up column. Hope to see you again in seven short days!