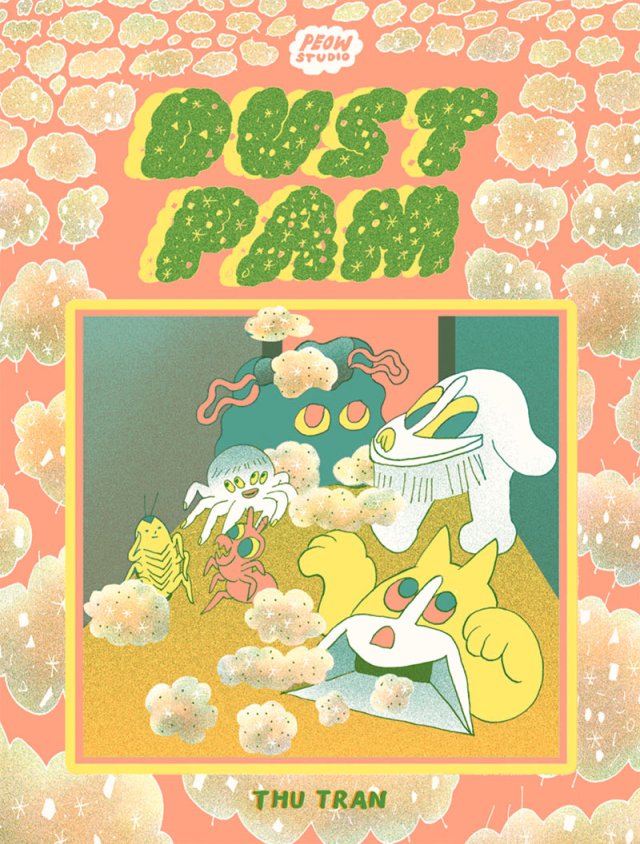 One of the crazier things to come down the pipeline in recent months — as well as one of the most endearing — has to be Thu Tran’s Dust Pam, a compact little 72-page Risograph-printed book published by Sweden’s Peow Studio that in many ways defies expectation, classification, perhaps even description. But around these parts we’re pretty goddamn hard-headed, so we never let that stop us from trying —

Presented in various gradations of white, mustard yellow, mouthwash green, and salmon pink, the aesthetics of Tran’s book are as singular as its subject matter : our protagonist is an anthropomorphic dust pan/cat hybrid who’s obsessed with keeping both her home and her workplace (Best Snacks Factory, where she cleans up cheese dust all day) absolutely spotless, but is constantly at war with a veritable army of insects that seem to pop back up as soon as she removes them. Things happen in her life, no question about that — perhaps the funniest/creepiest of which is when she strikes up a friendship with a dog/broom and they go back to her place to engage in cleaning-as-allegory-for-sex (complete with awkward one-night-stand goodbyes after all is said and done) — but the short vignettes that make up the contents of this comic can’t really be said to constitute a “narrative” so much as a series of events that could very probably be arranged and presented in almost any order, which has the oddly unsettling effect of making audiences feel more like voyeurs than readers per se. It takes a little while to get with this flow, or at least it did for me, but it works once you’re willing to “buy in” — and most of that is down to Tran’s utterly charming cartooning.

Deceptively simple on its face, the artwork in Dust Pam‘s border-less panels is almost brazen in its sheer confidence : Tran has developed a hermetically-sealed reality that more than likely can only be communicated by the means she’s found to do so, namely quick-but-precise linework flowing into pleasingly abstract shapes and vaguely-recognizable figures accented by dulled “day-glo” hues — a kind of visual language I certainly had never conceived of before (nor, frankly, had anyone else, prior to this), but if you’re looking to make something unquestionably alien by definition feel almost instantly welcoming and familiar? This is the way to do it. 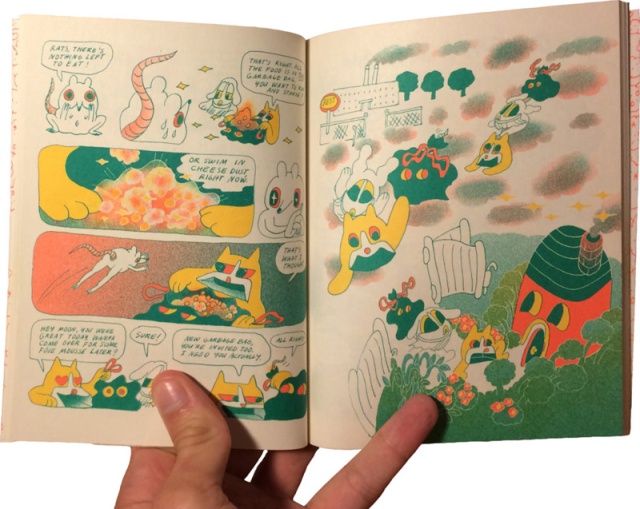 When you’re going “all-in” on weirdness, there’s no point in being shy about it, and while the “funny animal” genre in a general sense is perceived to be non-threatening, the distinctly “lived-in” ethos Tran adheres to goes one better by making you feel like you must have seen cartooning like this before — even though, if we want to be absolutely precise about things, you haven’t. The jubilant attitudes of her characters is one thing (Pam’s OCD mindset should, by all rights, be grating, but damn, she enjoys her myopia so much), but it’s the drawing that does the real heavy lifting in terms of making the non-sensical entirely sensible. There’s a keen awareness in every motion line, every dust mote, every billowing cloud, every bizarre industrial machine, every — shit, everything. Tran might be telling a fun little series of stories here, but she’s deadly serious in her intention to lay out her vision on the page.

All of which means, of course, that it’s very nearly impossible not to have a really good time with this book. It has a breezy, near-weightless quality to it that, in a pinch, could be described as “dreamlike,” but for its creator, it has to be much more like a dream come true — I can’t explain what goes on in Thu Tran’s mind, but she’s found a way to express it, to get it out there in front of people, in what I can only assume is more or less the exact way she envisioned it. That’s a quietly remarkable feat right there — just as this is a quietly remarkable little comic.

The Peow Studios website is currently down for maintenance, and Dust Pam appears to be sold out from most other outlets, but last I checked a few copies were still available from the Retrofit Comics Store, so if you’re interested I would suggest not dawdling and making tracks over to http://retrofit.storenvy.com/collections/936423-comics-from-friends-of-retrofit/products/20862701-dust-pam-by-thu-tran