One book understandably sucked all the oxygen out of the room this week, and we’ll dive right into it first, but fear not, there are a few others worth talking about, as well —

So, look, let’s just call it like it is : Action Comics  #1000 is an eight-dollar victory lap. A “double milestone” book celebrating both the fact that it’s the first American comic to hit the four-digit-issue-number mark, as well as the 80th anniversary of Superman’s first appearance, you go in figuring you’re in for plenty of self-congratulation here, and yeah, it’s essentially 80 pages of DC’s top creators, past and present, paying tribute to the company’s number one character (sorry, Bat-fans). Jerry Siegel and Joe Shuster get the “80-Page Giant” dedicated to them, as well they should, but don’t come in for much mention anywhere else within its pages, which feels like a bit of a slight — although not nearly as big a one as when they were swindled out of any claim of ownership to their creation in exchange for the princely sum of $130. And yeah, as DC’s defenders are always quick to point out, the company did attempt to “make good” with the two guys from Cleveland in their dotage , but they were certainly owed a lot more than they ever got. Hell, their heirs are probably still owed a lot more than they ever got. But we’re not here to focus on that issue too specifically, we’re here talk about what we got in this comic —

“What Superman Means To Us All” is the connective tissue holding all the short-form strips in here together, and some address the subject more successfully than others — there’s a veritable “murder’s row” of talent on hand, with Dan Jurgens, Peter J. Tomasi, Paul Levitz, Marv Wolfman, Tom King, Brad Meltzer, Paul Dini, Geoff Johns, Richard Donner, Scott Snyder, Louise Simonson, and Brian Michael Bendis on script duties and Jurgens, Patrick Gleason, Neal Adams, Curt Swan, Butch Guice, Jim Lee, Clay Mann, Rafael Albuquerque, John Cassaday, Olivier Coipel, John Romita Jr., Jerry Ordway, Jorge Jimenez, Doug Mahnke, and Jose Luis Garcia-Lopez on art, and while it’s nice to see that Jurgens, Tomasi, and Gleason were all allowed to say good-bye to the character before Bendis’ much-ballyhooed arrival next month (the Tomasi/Gleason story being a particularly effective “Superman Through The Years” yarn told entirely in single-panel “splash” pages), it’s really the “guest” creators who do the best job here, particularly Tom King and Clay Mann, who capture the essence of all that is special about the Man of Steel in just a handful of gorgeously-drawn, sparsely-worded pages.

Of the other offerings, I had a lot of fun with the “retro”-style Supes/Luthor confrontation by Levitz and Adams (available only in the digital preview copy I got and not the print edition, fair warning), and the Johns/Donner/Coipel “Golden Age” story is a blast, as well, but really the overall quality of everything is pretty consistent, barring one curious misfire, that being the Wolfman/Swan/Guice strip that takes a previously-extant story originally written by Cindy Goff and simply swaps out her original dialogue and captions for new stuff. Not sure what the point of that was, other than to make sure the greatest Superman artist of all time was represented in the book.

As for covers — there were nine to choose from, one for each decade Action Comics has been around in addition to the “main” one,  and I opted for the Dave Gibbons/Angus McKie 1950s variant, so that’s what’s atop the column here. All in all I felt like I got my money’s worth and then some out of this book, and while the intro to the new Bendis “era” that wraps things up was nowhere near interesting enough to convince me to give his forthcoming Man Of Steel mini-series a try (much less to continue on into the two monthly titles after that’s done), I’m glad to have bought this comic and recommend that anyone with even a passing interest in Superman —whether as a character, as a cultural icon, or both — do the same. 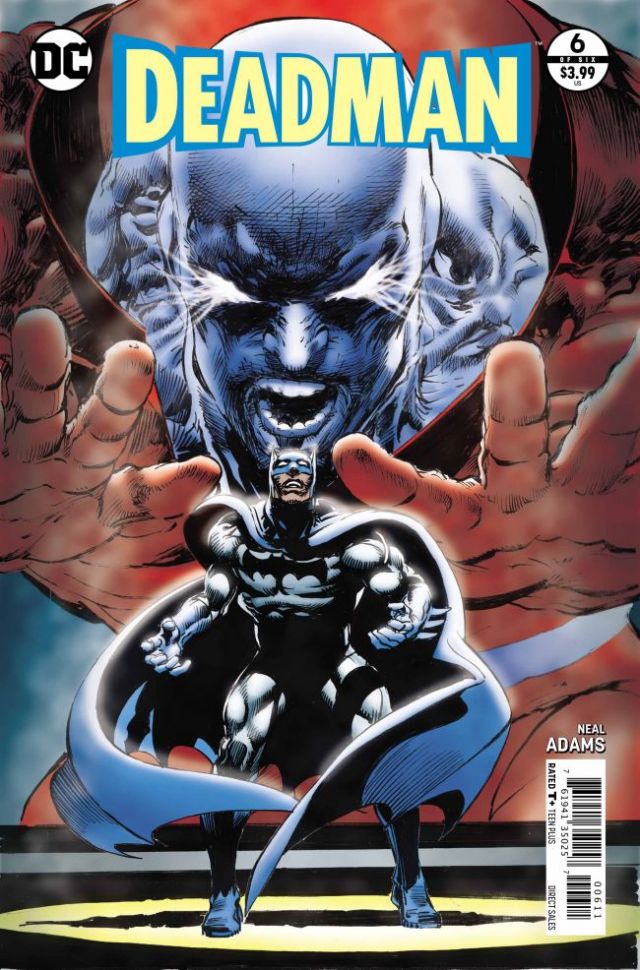 Sticking with DC, this week saw the release of the sixth and I-thought-final issue of Neal Adams’ Deadman mini-series, and if you thought things were incoherent before — you ain’t seen nothing yet. I swear that Adams is just making this shit up as he goes along and that no one’s really bothering to edit what he turns in — and that’s what makes his latter-period work so jaw-droppingly, singularly bizarre and interesting. Batman is on the cover here but isn’t in the book — the multitude of supernatural guest stars who are in the book aren’t on the cover — and everyone is shouting all the damn time, even when there’s no reason to. I’m certainly game for more of this kind of utterly alien type of storytelling, where the normal rules of what’s “good” and “bad,” what “works” and what “doesn’t,” simply do not apply — and whaddya know, as this issue comes to an end the story doesn’t, and it looks like a second six-part “arc” is in the offing for later this year. Yeah, at four bucks a pop buying all twelve is going to get pricey, but I have no complaints. Adams’ work may be an acquired taste at this point —but once you have acquired it, there’s nothing else remotely like it. 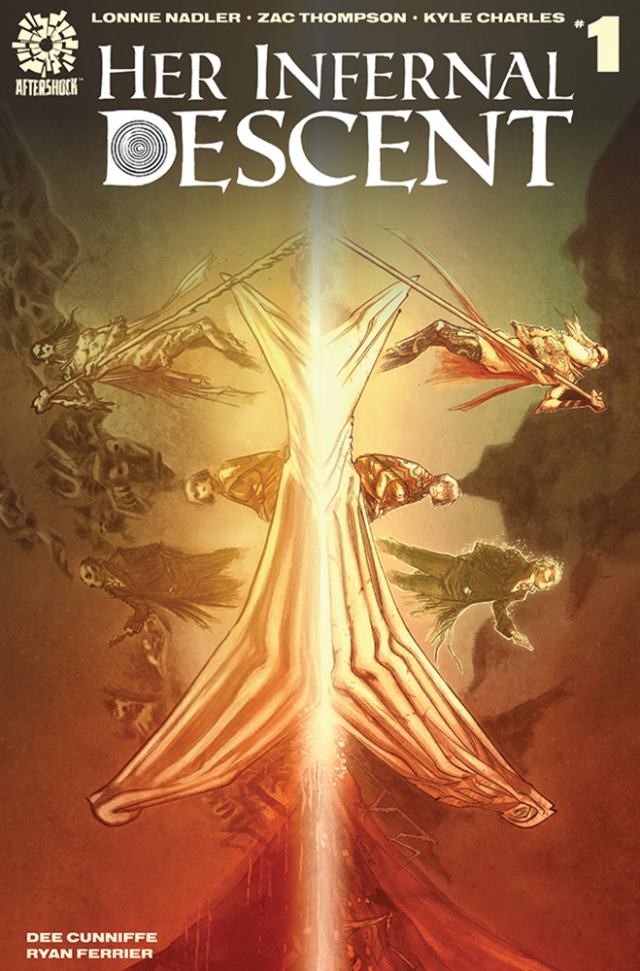 I was a little rough on Lonnie Nadler and Zac Thompson’s Come Into Me #1 a few weeks back (although I gave well-deserved “props” to artist Piotr Kowalsi), but I’m still down to give any of their creator-owned stuff a try, and the first issue of their new Aftershock series Her Infernal Descent is all the proof I need that sticking with these guys was the right call. An elderly woman who’s lost her family in an apparent (though, as yet, undefined) tragedy is escorted through Dante’s Nine Circles of Hell — by William Blake? This is the sort of brash, ballsy mash-up that’s either going to really work or really miss the mark, and so far it’s really working.

I’ll grant you that some of Blake’s rhyming iambic pentameter dialogue seems both forced and far less intelligent than anything you’d expect him to actually say, but the overwhelming majority of it is highly successful, the sheer bravado of the imagination on display here is a sight to behold — and speaking of sights to behold, Kyle Charles’ rich, sumptuous, evocative artwork is worth the $3.99 price of admission on its own, and his page layouts are astonishingly imaginative. I think this one is slated to run six issues, although I could be wrong about that — one thing I’m not wrong about, though, is that you need to jump on this book now. 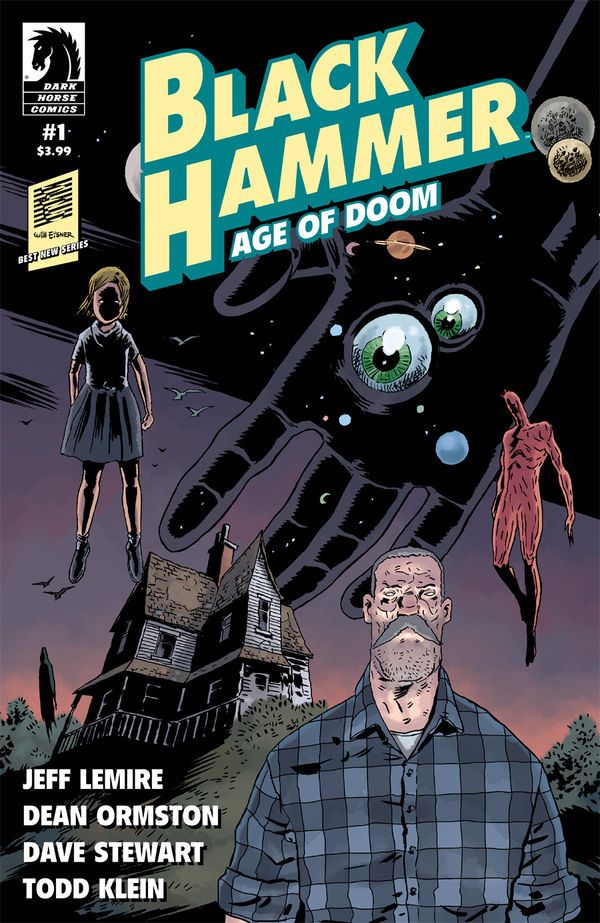 One more debut issue to wrap things up, even if it’s not a real debut issue, so to speak : Black Hammer : Age Of Doom #1 kicks off the second “arc” of Jeff Lemire and Dean Ormston’s revisionist super-hero series, and shows that my concerns about this “universe” being spread kinda thin through franchising and whatnot (see Sherlock Frankenstein And The Legion Of Evil and Doctor Star And The Kingdom Of Lost Tomorrows — with, apparently, more on the way) were ill-founded indeed. I know, I know — Dark Horse has always milked Hellboy for everything it’s worth and then some, and they seem to think they have a big enough hit on their hands to do the same here, but who can argue with results? I’ve enjoyed both spin-off series to date, and Lemire and Ormston haven’t missed a beat during the brief hiatus on the “main” title, either — this issue sees the new Black Hammer promise to reveal all, only to be whisked away to another kind of limbo that causes her to re-think all that she thought she had figured out, while the rest of our cast finally manage to get all their ships sailing in the same direction, and that direction is right the hell out of their own private Idaho and back to the “real” world. Somehow. Lemire’s script is fast-paced and bursting at the seams with energy and ideas, Ormston’s art is atmospheric, emotive, and creepy when it needs to be — and no less than the goddamn fucking Ramones themselves put in a guest appearance. What’s not to love? You need this comic more than you need four dollars.

Okay, that’s good enough for another column. I don’t see a whole lot in next week’s solicits that turns my crank, but I’m really looking forward to Michelle Perez and Remy Boydell’s The Pervert, so we’ll have that to talk about, plus whatever else strikes my fancy, when next we meet here in seven days.