I don’t know what kind of music Ben Passmore listens to, but his work definitely has an admirably DIY punk “vibe” to it, not just aesthetically, but narratively — which may come as something of a surprise to readers only familiar with his best-known book, last year’s Ignatz-winning Your Black Friend. That comic was an expertly-structured treatise on as relevant a topic as one can possibly imagine, emotionally resonant to be sure, but designed primarily to engage readers on an intellectual level. It succeeded in everything it set out to do with flying colors, but marked something of a departure for the newly-minted “genius” cartoonist behind it, who certainly never shied away from the political in his earlier work — but neither did he place it front and center in such a frank manner, choosing instead to let it inform, rather than define, prior efforts.

Now that his readership has grown exponentially, though, it’s a terrific time to re-visit the formative steps in Passmore’s career, and Silver Sprocket have wisely decided to do just that by reprinting his first long(ish)-form series, the four-part Daygloayhole, in crisp and vibrant full color on slick, high-quality paper between thick, cardstock covers. The first issue (labeled Quarterly Daygloayhole One) just hit shops today, and at six bucks it’s an absolute bargain, so don’t even fret about value for money. What you really want to know, though, is what the whole thing’s about, so — 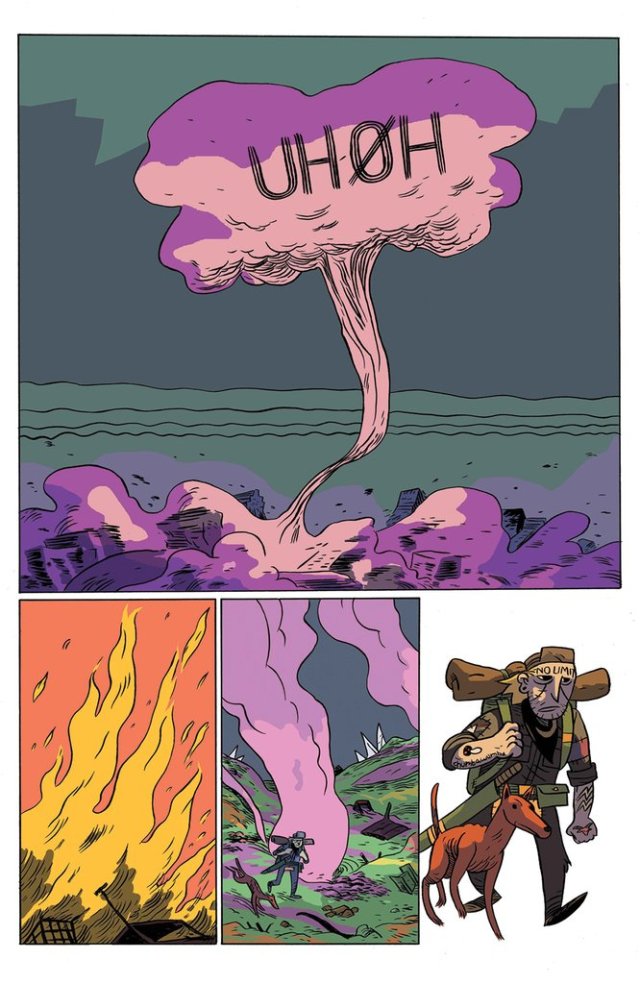 Welcome to the post-apocalypse, motherfuckers! The “Big One” has come and gone, and certainly the trappings of films like The Road Warrior, The New Barbarians, 2019 : After The Fall Of New York, Equalizer 2000 etc. are all present and accounted for here, but Passmore’s take on a nuked-out New Orleans features plenty of distinctly 21st-century twists to it : corporate exploitation of the masses still runs rampant, gentrification still threatens to rip the heart out of communities, cops are still crooked as snakes and prone to sudden fits of psychotic violence, and the rabble is still kept in line by means of an endless supply of distractions. And since we’re talking about those —

Self-deprecation is certainly a staple of autobio comix artists from Justin Green to Crumb to Chester Brown to Joe Matt to — well, the list is pretty well endless, isn’t it? But it’s something altogether new to present a “worst version of yourself” to readers and then plunk them/you into the middle of a fictitious situation — and an outrageously fictitious one at that. It works, never fear — but it’s a gutsy choice that would probably miss the mark in the hands of a lesser talent.

Then again, would a “lesser talent” even attempt a comic like this? Probably not. And yet Passmore’s “fourth-wall” busting works precisely because he’s constructed the only sort of environment where it can : a world entirely unlike our own at first glance, but exactly like it the moment you scratch beneath its surface. One could even argue that the only difference between the “reality” of Daygloayhole and our actual reality is that the bomb has gone off. Apart from that, human society — and human nature — seem more or less exactly the same, if exaggerated for purposes of both comedy and commentary.

So Passmore’s aims here are pretty clear, but one of the more enjoyable things about this book — and here’s where we get back to that DIY punk ethos I mentioned at the outset — is the simple fact that, “rules” of his world already firmly established in his mind, he doesn’t go for intricate, or even appreciably tight, plot construction, and instead feels his way through the situation he’s created in naturalistic, free-flowing, perhaps even stream-of-consciousness fashion. Having made up a solid premise, he’s fully confident in his ability to make it up as he goes along from there. Again, gutsy. And, again, he pulls it off.

His smooth-flowing line and organic, expressive style provide the perfect visual complement to the absurdist-but-all-too-real vignettes that comprise his makeshift “script” (a paradigm that successfully carries over into the superb back-up strips by Erin Wilson, Scott Kroll, and Tyrell Cannon), and in the end what we’ve got is a thoroughly-realized, and thoroughly-immersive, comic that ranks among both the most enjoyable, as well as the most thought-provoking, of the year to this point. Never take a pass on Passmore.