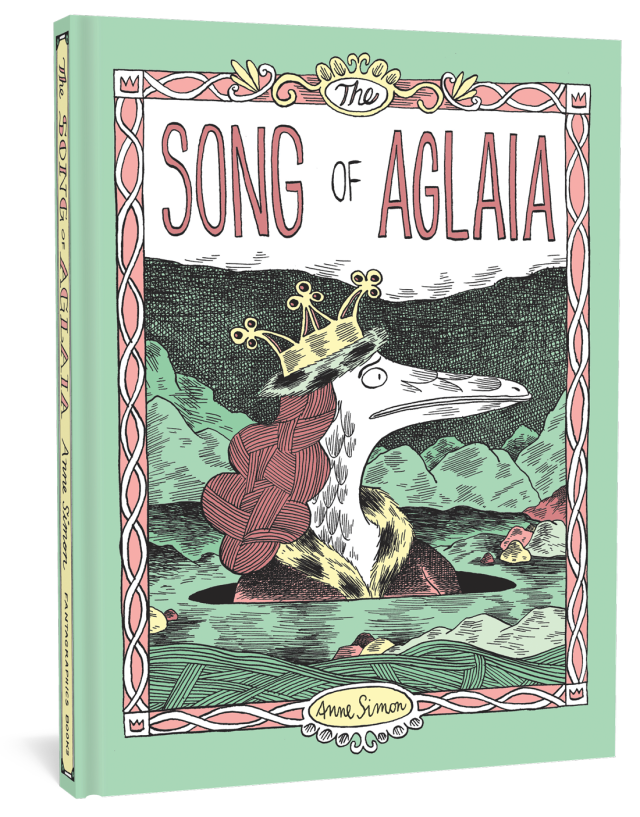 There are so many things going on in veteran French cartoonist Anne Simon’s graphic novel The Song Of Aglaia (originally serialized in a variety of European publications beginning in 2008, later collected in her home country under the title Le Geste D’Algae in 2012, and soon to be released in English for the first time by Fantagraphics) that it’s frankly impossible to pigeonhole it into a single category :  part fairy-tale, part cautionary fable, part fantasy narrative, part feminist treatise, part satirical take on palace intrigue, part dark comedy, part family drama, part tragedy — in short, it’s a book that wears a lot of hats. The remarkable thing (okay, one of the remarkable things) about it, though, is that it wears them all with a sense of fierce, defiant, downright joyous aplomb.

I admit that I’m a newcomer to Simon’s work, having encountered it for the first time via her astonishing triptych of inter-connected strips in the most recent issue of Now, but after reading those I needed more, and I needed it immediately — and if her Now stories were an appetizer, The Song Of Aglaia is more than a main course, it’s an absolute feast : for the eyes, for the mind, for the heart, even for the funnybone.

Our titular heroine is of a bird-like aquatic species known as the Oceanides (one of several entirely invented, and thoroughly inventive, zoological creations to spring from Simon’s imagination and onto the page) who learns all she probably needs to know about men early on when a hook-up with a quickly fleeing  mer-male leaves her pregnant, and her domineering father consequently banishes her from her family, home, and society — so it galls her to no end when she’s forced to rely on a marriage of convenience to a circus owner named Mr. Kite (one of several Beatles references sprinkled throughout the book, with a special emphasis on Sgt. Pepper’s) in order to prevent her execution at the hands of cruel misogynist tyrant Von Krantz, ruler of the kingdom of Barbarann (okay, the Beach Boys get a nod, too — and Bowie comes in for a couple later in the story, as well), who has decreed pregnancy outside of marriage to be a capital offense.

Von Krantz is more Donald Trump than Mike Pence, though, and his arrogance, incompetence, laziness, and stupidity eventually open the door to his demise at Aglaia’s hands after he kidnaps her daughters (who Kite has taken on as his own, a move for which his wife is equal parts thankful and resentful, a dichotomy than defines their entire marriage), thus securing her own un-planned ascension to the throne. 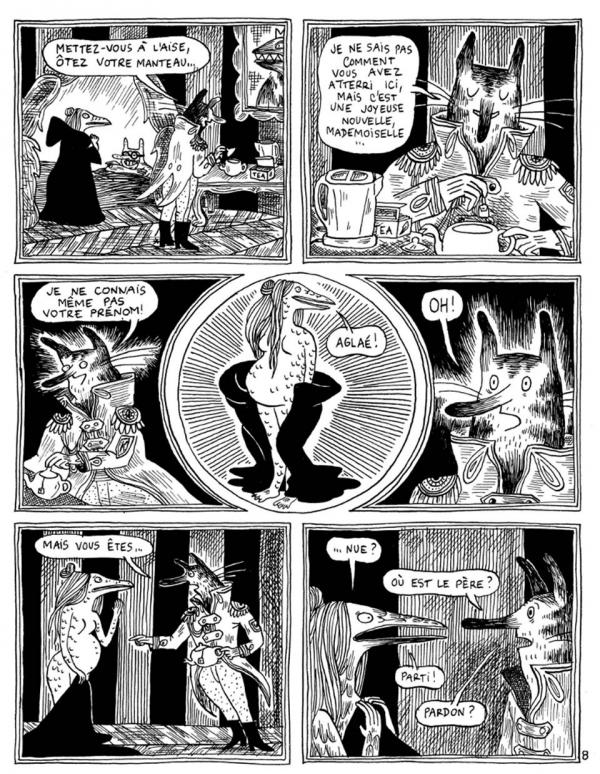 This initially looks like a big step forward for our protagonist, her family, and indeed everyone in the land, but Aglaia can’t escape the restlessness that eats away at her soul, the longing for a life of discovery and adventure that was denied her by early-onset domesticity. Her circumstances may have changed — and considerably so, at that — but her quest for some semblance of an autonomy she has never known remains a constant, and as such she’s not much of a mother, even less of a wife, and delegates most of her responsibilities as regent to a more-than-willing subordinate. What’s she doing with her time, then? Why, stepping out, of course!

Aglaia’s lover is a living rock imprisoned in a hole in the ground (you can unpack all kinds of symbolic significance from all that), and for her purposes he’s pretty much made to order : easy to manage, even easier to both satisfy and be satisfied by, and always available, but when she ends up pregnant again, the seeds of her final de facto enslavement are sown — and that’s probably as far as I should go down that road given that this book hasn’t been released yet (in English, at any rate), and I really do want to be cautious in regards to “spoilers.” 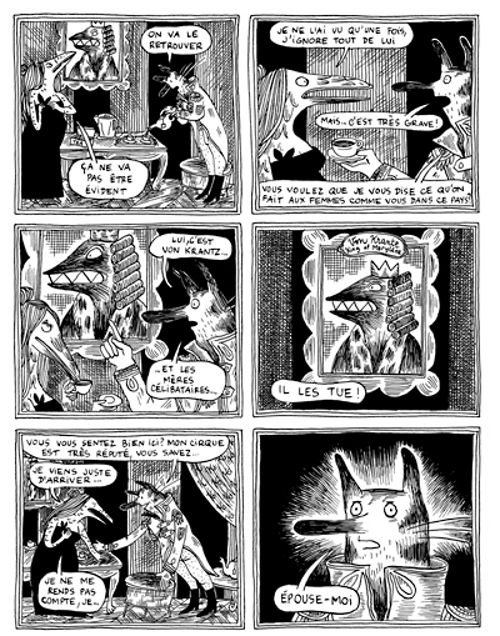 Even so, hopefully you have an inkling that Simon is exploring weighty themes here to be sure, ones that have taken on greater import in the years since she originally completed this work due to the sad resurgence of repressive, anti-woman authoritarianism once naively thought headed for history’s dustbin — but she’s nothing if not infinitely playful and sarcastic, showing no undue allegiance toward, or even particular sympathy for, any of her characters, and opting instead for a narrative tone that pays equal attention to the tragic underpinnings of their lives, as well as to the inherent character flaws that made them inevitable, with just enough detachment to allow her to see the funny side to all of it. She gives you plenty to think about, but also plenty of reason to laugh — sometimes in spite of yourself — while you ponder all those big questions.

Simon’s artwork is equally complex, multi-faceted, and more than up to the task set by her ambitious, layered narrative — detailed linework, intricate cross-hatching, unique (to put it mildly) character designs, literally fantastic environments rendered with stylish flair,  with just enough Gary Panter and Richard Sala influence at the margins to make it feel inviting and familiar before spinning off into entirely new and unexpected directions. The Song Of Aglaia looks like what it reads like, which is to say : a comics story both timeless and utterly, singularly fresh and new.