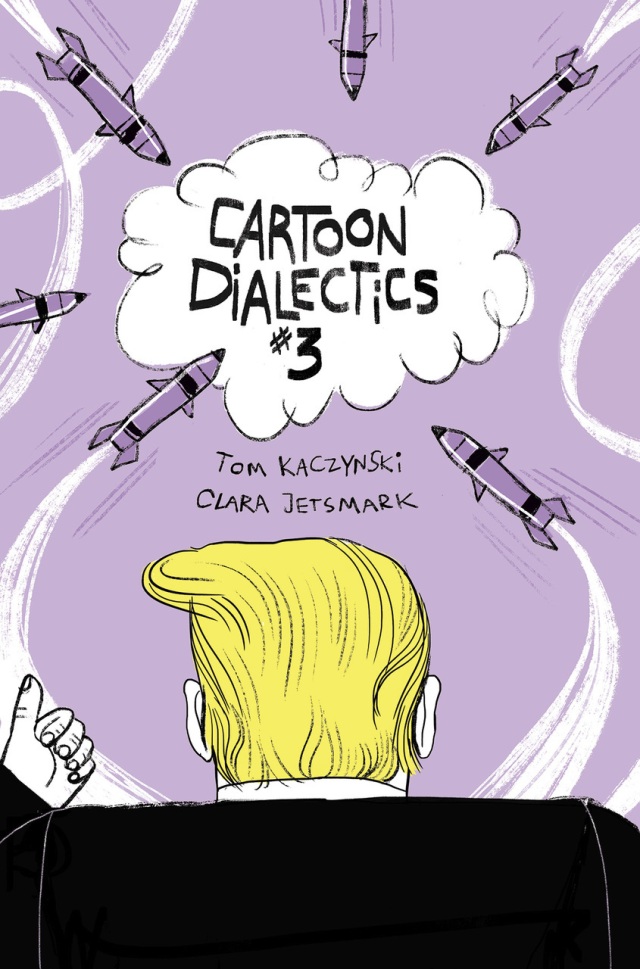 Still reeling from the shock of losing Steve Ditko here, but nevertheless, the show must go on, even if it feels like it shouldn’t. Is there any time afforded us, in this modern world, to slow down, catch a breath, and take stock of where we are — not just individually, but as a people? Funny you should ask —

Tom Kaczynski has clearly been giving this very subject a great deal of thought, and in Cartoon Dialectics #3, the latest in an occasional series published by his own Uncivilized Books (pride of the Minneapolis indie cartooning scene, I assure you), he reflects on the siren-call power, and dangerous trappings, of nostalgia, and examines how yearning for an entirely mythologized past led us to where we are today — which means, of course, how it managed to get us stuck with Trump. Danish cartoonist Clara Jetsmark is his writing collaborator for this “main feature” strip, but a secondary one focused on nostalgia in a more general sense, and a third centered around life in an antiseptic future featuring a character who lives out his days entirely within a series of interconnected skyways (something we know all about here in the Twin Cities) are shot through with similar themes of alienation — from the world in general, and our own lives in particular. As always, Kaczynski’s loose-but-precise linework is expert at conveying just the right amount of visual information in each drawing, and expanding from mini-comic to half-size with this issue really gives the art much more room to breathe and increases the effectiveness of pages that utilize a generous amount of negative space exponentially. The choice of purple as a “third color” along with the requisite black and white is an interesting one, and gives the proceedings an interconnected look to go along with the uniform tone. This is astonishingly smart, literate cartooning well worth the $6 asking price — but you don’t even have to pay that much since Kaczynski is offering it on sale at $4 right now. Jump on the following link and order it if you know what’s good for you :http://uncivilizedbooks.com/ 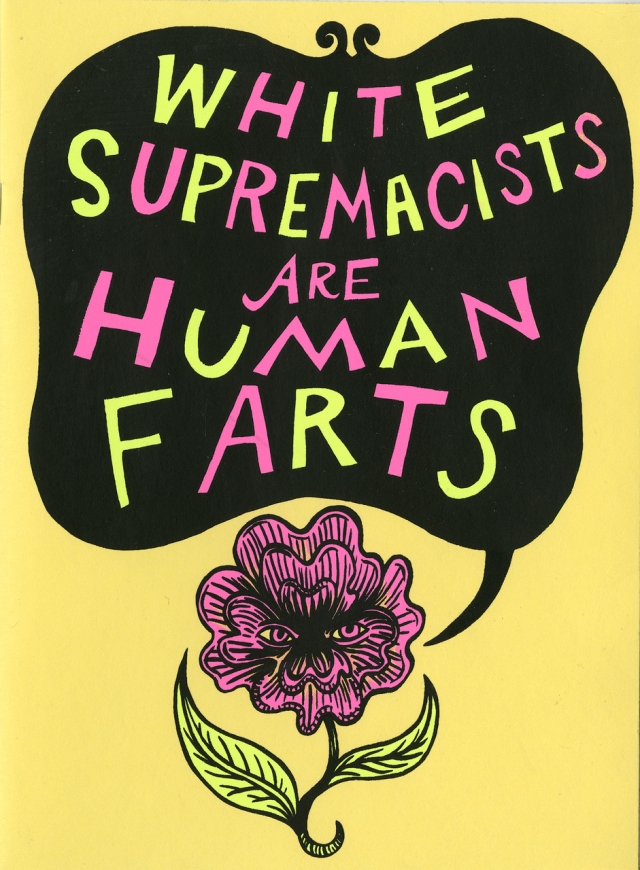 Sticking with Uncivilized — and with broadly anti-Trumpian messaging — we next turn out attention to Jenny Schmid’s awesomely-titled White Supremacists Are Human Farts, a concise but heartfelt look at what it means to raise a young child in the shadow of all the hateful right-wing bullshit that’s going on right now. Schmid’s adopted daughter Sinee is also an immigrant, so this is understandably personal for the both of them, and starting the (standard-sized, with heavy cardstock cover) comic off with a visit to the Anne Frank Museum sets the tone for all that follows perfectly — which isn’t to say that it’s all doom and gloom, as there are some genuinely touching and humorous instances of mother-daughter interaction on offer here that actually make this comic as charming as it is topical. Schmid’s cartooning is richly-detailed and saturated under a veritable layer of gorgeous, heavy inks in a manner at least a little bit reminiscent of Phoebe Gloeckner, but it’s also infused with a subtle but ever-present undercurrent of visual optimism that matches the narrative tone of these short vignettes perfectly. $8 is admittedly a lot to pay for a 16-page comic, but this one if worth every penny. Available from the same website as above. 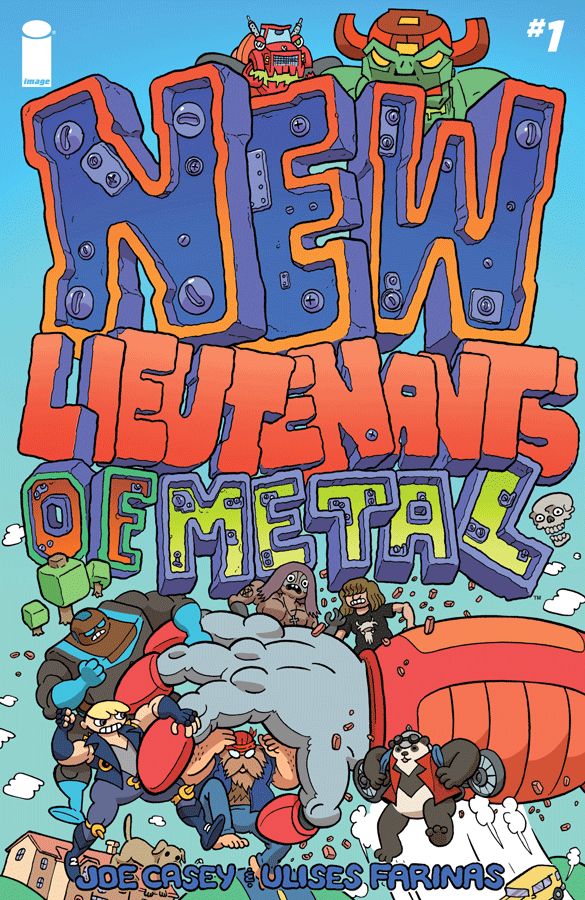 If you need a genuine “feel-good” comic to escape from the reality our first two books concern themselves with, you could do a hell of a lot worse than Joe Casey and Ulises Farinas’ New Lieutenants Of Metal #1, released this past Wednesday from Image. Casey is at his most interesting lately when working through his “mid-life shit” (if you’re reading this, Joe, there are a lot of us who still want to see the long-promised return of Sex), and that’s exactly what he’s doing in this deliriously fun mash-up that’s part love letter to Image’s foundational titles (specifically Youngblood), part Kirby tribute (especially as far as the dialogue goes), and part celebration of ’80s “headbanger” music. There are some welcome nods to contemporary social attitudes with the book’s positive portrayal of gender fluidity and its inherent understanding of the absurdity of the (bloodless, it must be said) ultra-violence it revels in — robotic monster trucks trashing a city is never gonna be a “mellow” scene — but for all that this is a comic that is neither terribly preachy nor especially stupid. It’s just fun — thanks in no small part to Farinas’ bright, energetic and, yes, “cartoony” art. This is slated to run four issues, I believe, and if they’re all this good, I won’t mind forking over $3.99 a pop for them in the least. 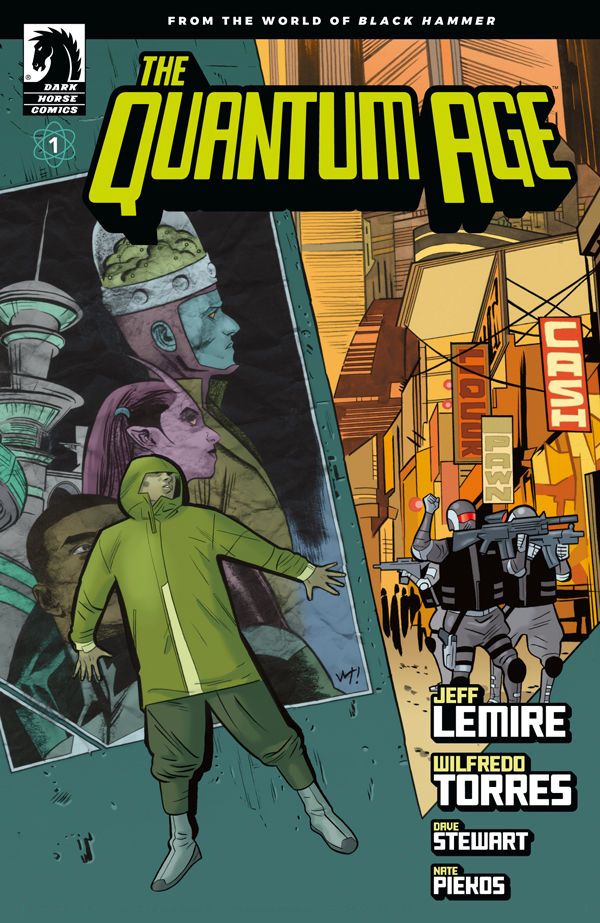 Last up we’ve got Jeff Lemire and Wilfredo Torres’ The Quantum Age #1, yet another spin-off from Dark Horse’s already-venerable (and already-heavily-franchised) Black Hammer series, and while it’s true that they’re milking this particular cash cow for all it’s worth and then some, I’m really not going to argue when the results are this consistently good. This time out the setting is the semi-distant future, and Lemire does a damn fine job extrapolating his concepts and characters into a new and decidedly dystopian setting, while losing none of the inherent charm that has made the (God I hate this term, but) “flagship title” such a favorite with fans and critics alike. There’s nothing terribly original going on here — mysterious protagonist seeks to bring back the (once again) departed heroes to save the world from what it’s become — but originality has never been Black Hammer‘s stock in trade in any of its iterations. Rather, it’s all about well-executed storytelling that breathes a welcome dose of new energy into the decidedly played-out subgenre of superhero revisionism by acknowledging that, much as we may think we’re too “cool” to admit it, these absurd caped adventurers mean something to us — and, furthermore, there’s nothing wrong with that. There’s certainly nothing wrong with Torres’ art here, that’s for sure (not something I’m always willing to say about his work), and when you take his economic, smooth style and pair it with the always-perfect hues of colorist extraordinaire Dave Stewart, the results are very eye-catching indeed. This one’s also a four-parter, and also well worth its $3.99 price tag.

And that should do it for this Round-Up, but there’s plenty to look forward to next week,  including the first part of Alan Moore and Kevin O’Neill’s final League Of Extraordinary Gentlemen series, The Tempest, so join me back here in seven days when we take a look at that, plus whatever else strikes my fancy!