All good things, as they say — and while Noah Van Sciver’s annual (or thereabouts) Fantagraphics-published Fante Bukowski series has been a very good thing indeed, by and large (we’ll get to its “big flaw” in due course), it’s usually a safe bet to wrap up a project before any kind of creative staleness sets in. To that end, then, when I heard that A Perfect Failure : Fante Bukowski Three would mark the final chapter of what what was now officially a trilogy, it sounded to me like the right thing to do — but now that the book has arrived (or, whoops, will arrive soon, this is an advance review, after all), has Van Sciver indeed checked out at the correct time?

Okay, fair enough, Noah himself isn’t “checking out” of cartooning (in point of fact, 2018 has been as busy a year as ever for him, with a new issue of Blammo hitting a few months ago and a new graphic novel from Uncivilized Books, One Dirty Tree, hot off the presses as I write this), but his longest-form project to date is now “a wrap,” and by the time the calendar turns, I’m guessing that there will be one detailed critical analysis after another coming down the pipeline poking and prodding at every square inch of the story in its newly-minted totality. Might as well start the “party” here.

Don’t let the more “upscale” format — I swear, this “award-winning,” mass-market-friendly design looks ready for Oprah’s Book Club, if such a thing still exists — fool you, Fante is still one shaky footstep above skid row (except when that tenuous foothold slips), still oozing with unearned entitlement, still entirely oblivious to his annoying self-importance at best, self-righteousness at worst. In other words, he’s the same hopeless case we’ve come to know and in no way love, even if he’s impossible to hate despite his best efforts. And yet —

While any actual improvement in his craft continues to elude Columbus, Ohio’s most clueless adoptive son, the greatest undiscovered literary talent of his generation (in his own mind) spends much of this final installment of his “adventures” with the fame and adoration he craves finally within his grasp, yet frustratingly out of reach — even if he doesn’t always know it. The less said about that in specific terms the better at this pre-release stage, but this much I’ll divulge without any pesky pangs of guilt, or even conscience : his gig ghost-writing a vapid teen celebrity’s “autobiography” only looks like the mythical “big break” he’s been hoping for — behind the curtain, forces well beyond, and entirely outside of, his control are maneuvering him toward superstardom for reasons all their own. Unless they change their minds, of course. 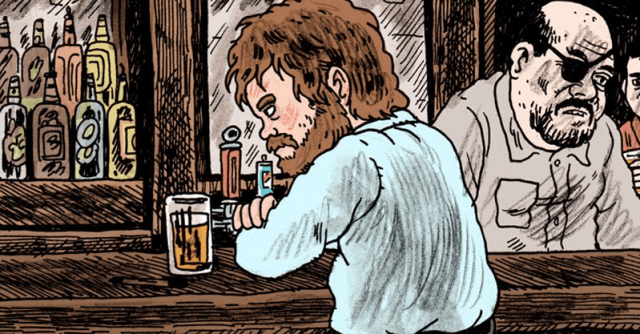 All this plays out against a narrative through-line of family drama that sees Fante return to his old Denver stomping grounds to either bury the hatchet with his father or bury it in his skull, and while the two couldn’t be more different in some respects, it’s clear that the apple didn’t fall too far from the tree as one compulsive, self-absorbed “mansplainer” meets another in a test of wills that will surely test yours — even as you laugh, furiously and continuously, in spite of yourself. Get ready for pretentiousness vs. “tough love” with Van Sciver, as is his custom, absolutely “nailing it” in terms of dialogue and characterization.

Perhaps surprisingly, though, it’s not a dead end that awaits Fante when all is said and done, but a more clear shot at something roughly approximating happiness than he’s either earned or deserves. He could (hell, probably will?) fuck it all up sooner or later, of course, but a chance at love is there for him if he has the guts to grow up a bit and take it. Which brings me to —

If there’s one knock I have on this series in general (and, again, forgive me while I do my level best to refrain from “spoiling” any plot specifics) it’s the rather Tomine-esque “saviors with hearts of gold who exist solely to redeem eternally-adolescent men” portrayal of women that Van Sciver indulges in — but where his females fail to convince in terms of being fully-realized characters, they do at least (and finally) rise above being mere plot devices for the bulk of this finale even if they still, ultimately, serve that function as the metaphorical buzzer runs out. The fact that it seems trickier than it should be for a cartoonist of Van Sciver’s skills (speaking of, his illustrations and color work are both in top form here, but it’s not like that was ever in doubt) to give readers something approaching realistic, relatable women is depressing, to be sure, but he’s making steps in the right direction here, and that’s at least — something? In any case, if he ever happens upon this review, I hope he’ll take this as the nudge in the right direction it’s intended to be rather than as an antagonistic chastising or, worse yet, a brow-beating.

To answer our titular question, then, A Perfect Failure : Fante Bukowski Three probably isn’t quite a “perfect” ending, but it’s by and large a very satisfying one, and I’m going to miss this dumb, talent-less prick more than I should. Van Sciver’s sharp satirical eye and wit will no doubt find new targets worthy of his unique brand of naturalistic, entirely unforced evisceration, but from dive bars to pretentious art openings to seedy motels to seedier alleyways to seediest-of-all ‘zine shows (oh yeah, we get one of those in here), this has been a fun ride, and one that’s offered plenty by way of inadvertently “deep thoughts” along the way. Noah, take a bow.