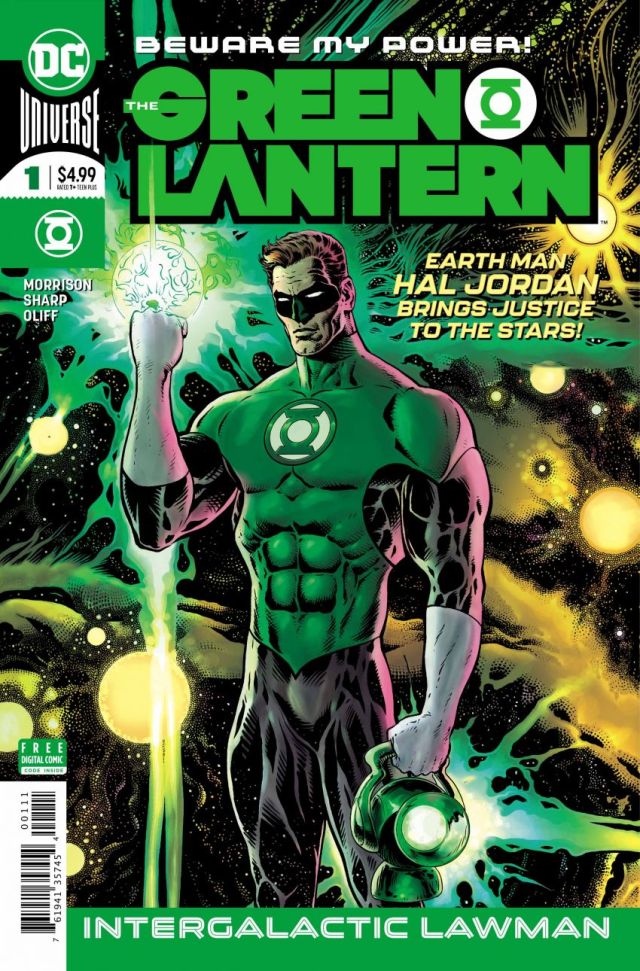 This week, we take a brief side-step away from our usual small-press “turf” to have a quick look at four high-profile mainstream comics now available on your LCS shelves — three are alphas, one’s an omega.

The Green Lantern #1  marks DC’s latest attempt to revive the flagging critical and commercial fortunes of their premier cosmic super-hero, and while the sort of “back-to-basics” approach being undertaken by writer Grant Morrison and artist Liam Sharp may be precisely what the character needs (not having read a contemporary GL story is probably a couple of decades I’m really not in much position to judge), a dose of some sort of ambition would probably go a long way, and this book has precisely zero of that. It’s hard to believe that the same guy responsible for such thought-through and intricate mind-fucks as The Invisibles, The Filth, Flex Mentallo, and Nameless could be so lazy as to write a dull and hackneyed pulp-adventure pastiche such as this, but that’s precisely the case, as Hal Jordan, “space cop,” goes after some meddling aliens intent on using a quasi-mystical device intended to bring its owners good luck — and very little else actually happens. Liam Sharp’s art is flashy and reasonably inventive in terms of his page layouts, panel designs, etc., but if you check out Hal’s weird, elongated neck on the cover, you’ll see that human anatomy is not his strong suit, and the problem is only exacerbated on the interior pages, some of which actively border on the hard to look at. This comic has one huge saving grace in the form of the coloring by industry legend (for good reason) Steve Oliff, who not only hasn’t lost a step but is still a good few paces ahead of most who have followed in his wake, but the hues alone in no way justify this book’s absurd $4.99 cover price (DC having apparently decided to tear a page from the Marvel playbook and charge an extra book for debut issues with maybe 6-10 extra pages). I went in to this one not giving a shit about the title character but hoping for the best given that Morrison is still capable of some thought-provoking, thoroughly engaging high-concept stuff —  and I walked away from it still not giving a shit about the title character, nor what these marquee creators do with him.

Hex Wives #1 marks the debut of the second non-Sadman title in the umpteenth relaunch of DC’s once-venerable “mature readers” Vertigo line (now re-branded, for what it’s worth, as DC/Vertigo), and again, one issue is all it takes to let me know that what’s going on here isn’t likely to be of much interest to me. Writer Ben Blacker is clearly trying to author the next feminist genre hit, and good on him for that, but this story of a group of amnesiac immortal witches held captive in sham suburban marriages by the men who have been tormenting them for centuries seems like it’s doomed to run of gas pretty quickly, as these ladies would have to be pretty stupid indeed to believe that their husbands go to work all day while they stay home and clean, prevented from going anywhere by the fact that none of them drive, and that there are long-running forest fires off in the distance that make the prospects of ever leaving town seem pretty remote indeed. I dug Mirka Andolfo’s clean, smart artwork, but the point of parables is that they’re already obvious enough for a child to understand, and I fail to see how layering a few on top of each other is going to do anything other than leave readers feeling pissed off that their intelligence is being insulted by something this painfully obvious as far as metaphors go. I laid out $3.99 for this comic from may own pocket, and I assure you that I have no intention of making that mistake again.

Bitter Root #1 sees the reunification of the acclaimed Power Man And Iron Fist creative team of scribe David F. Walker and artist Sanford Greene, this time plying their wares at Image Comics,  where both gentlemen ( joined for this project by co-writer Chuck Brown) appear to have not lost their strides at all, as this “Harlem Renaissance
take on the conflict between a likable-but-eccentric family and the vaguely Hoodoo-esque monsters they’re tasked with protecting their city — hell, their world — from” hits the ground running and never lets up. There’s still a veritable fuck-ton of details to be worked out as things progress, mind you, but this is a prime example of how slipping in social and political themes can often elevate a work at least a little bit beyond its genre trappings, given that these characters’ real chief nemesis is bigotry and intolerance. Yeah, it’s about as unsubtle as the just-reviewed Hex Wives, but in the hands of a triumvirate of creators as accomplished as these folks, who are clearly firing on all cylinders, the tried and true can still seem reasonably fresh and exciting — as this comic does. So, that’s $3.99 added to my pull list on a monthly basis — maybe it’s time to balance the scales by dropping one title for each new one I jump on?

Mister Miracle #12 is our “omega” this time out, in that it represents the final installment of writer Tom King and artist Mitch Gerads’ much-celebrated revival of Jack Kirby’s venerable Fourth World escape artist, and while the comic is (as has always been the case with this series) quite pleasing to have an extended “gander” at, I found the story to be somewhat uninspired and would like to humbly point out that I called this out as “Mulholland Dr., only with super-heroes and the suicide attempt the beginning” way back when I reviewed the first issue — and whaddya know, that’s not a bad description at all when thinking about the series in its totality. I’m also more than willing to bet that this finale will be hard-argued-over in many a fan circle for years to come, and that DC will iron out where this story fits into their corporate continuity long before the question of whether or not it even “really” happened is resolved to the satisfaction of crusty, pedantic funnybook-obsessives the world over. For my part, I thought it worked reasonably well for what it was — but what it was proved to be more or less exactly what I was expecting. I generally found that I felt like readers got their four bucks’ worth out of each issue in this run, but if you weren’t following it monthly you’d d be much better off waiting for the trade collection, which I would imagine is only a short time off, rather than hunting down the back issues. As you’ve no doubt gathered, I was considerably less effusive with my praise for this title than a lot of other critics out there who absolutely (and, frankly, embarrassingly) fawned over it, but it’s not like it was bad or anything, and I’m looking forward to having the time one of these days to sit down and re-read the whole thing in one go with an eye out for anything I may have missed.

And so ends another week of comics reading. Next week’s column will focus on — shit, it’s late, get back to me on that.