It used to be said that the inane sitcom Seinfeld was “a show about nothing,” which was no doubt true, but Brazilian cartoonist Julia Balthazar has a much better idea — her new comic Vows (or, as it’s known in its native Portuguese, Juras) is about everything and nothing simultaneously.

We have Laura Lannes to thank for this extraordinary little book making its way to American audiences by way of her recently-launched Pacote imprint, which is releasing four comics from Brazil in the next four months, each Riso-printed with exacting care by Carta Monir’s Diskette Press, and if subsequent releases are this good, then we’ve got a whole lot to look forward to. But I suppose we needn’t get too far ahead of ourselves yet when there’s still this one to talk about, am I right?

A family gathering is the setting for Balthazar’s story, but in so many ways it could be anywhere, anything — just as the characters, not so much “delineated” as “outlined” could be anyone — and the nature of their conversation, while specific to a particular event and the particular personages involved, could easily be about something else altogether. Balthazar’s sparsely-chosen words draw at least as much attention to what’s left unsaid as to what’s spoken, and as we limn the boundaries of what these people are willing to “put out there” for public consumption (even if it’s only to a small crowd), questions arise as to how much of our own thoughts and feelings we’re willing to verbalize, why, and to what end our choices not only reflect who we are, but inform where we’re going and literally determine what’s possible.

Maybe it’s the fluidity of the art that got my mind racing down so many roads that the comic itself doesn’t explicitly traverse, all pink-shaded shapes and border-less panels and oh-so-fluid in the extreme motion and non-motion. It certainly serves as something more than mere “visual accompaniment” and is every bit as integral as the written word in establishing the utterly unique ethos of the overall work. Separation is a theme here — how it persists in the face of even the most intimate of situations — but aesthetic unity is a bold and intriguing (to say nothing of highly effective) manner in which to draw attention to it and negate it all in one go. 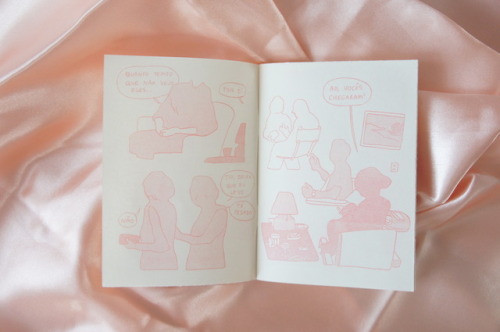 Which, sure, sounds like it makes no real sense, but as events and the depictions thereof move into ever-more esoteric (in the strictest sense of the term) directions, you realize it does. That, in fact, “two sides, one coin” is something far more than a simple cliche and that a work with sufficient vision and (perhaps even more importantly) intent behind it can both reject and embrace the phenomenon of individual identity at the same time. Can both question and re-affirm it. Can both celebrate and lament it.

Or maybe, just maybe, I’ve got it all wrong. I’m open to the possibility. Any work this deliberately undefined can and should and indeed probably must mean different things to different readers — and what each reader takes from it may be markedly different, may even run counter, to the artist’s goals and purposes. All I know is that any modest little comics ‘zine that prompts such deep philosophical queries from even one person must be doing something right — whether that “something” is what the cartoonist who created it was aiming for or not. 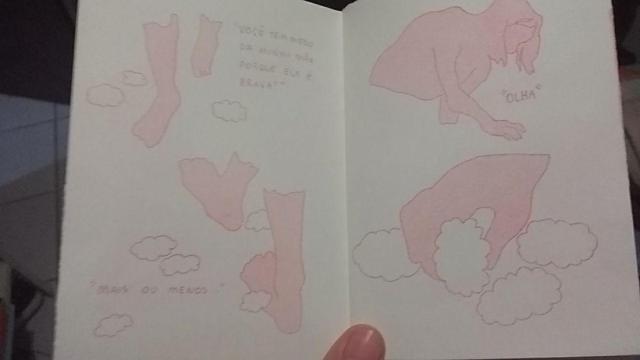 I realize a review this opaque may be frustrating, even outright confounding, to some readers — that’s an entirely fair criticism. But I would counter that it also means this book functions as an invitation — for folks to come inside, explore, think their way around, feel their way around, and come to their own conclusions about what this is, what it means, what it does.  It can be taken as an “A-to-Z” work, absolutely — and functions quite well as such, truth be told — but spend some time with it, consider all of it, and you’ll be drawn into some fascinating conversations with it every bit as memorable, and ultimately unknowable, as those presented on the page.

Vows is a map to any number of different places within yourself and in relation to others — but Julia Balthazar is all about showing you where you might go rather than telling you exactly where, or dictating the terms by which you get there.

Although no longer available for individual purchase, Vows can be obtained as part of the Pacote “four-pack” from Laura Lannes’ website. Retail price for the entire bunch is $32. Check it out at :https://lauralannes.bigcartel.com/product/pacote-completo

As with all reviews, this one is “brought to you” by my Patreon page, where I serve up thrice-weekly exclusive updates on the worlds of comics, films, television, literature, and politics. You support helps me to keep things going there, sure, but  also to continue providing free content both here and at my trashfilmguru movie site. Please consider joining up over at https://www.patreon.com/fourcolorapocalypse

One thought on “Say Your “Vows””