Another week, another mess of first issues — even if one of ’em is from last week. What can I say? My LCS got shorted on the title in question and so I didn’t get a copy until this past Wednesday. But we’ll get to that in due course. First we’ve got —

Second Coming #1, by Mark Russell and Richard Pace, was originally slated to be a Vertigo title until the suits at DC got cold feet, and I’d say it’s all worked out pretty well for the creators in question given that Vertigo is being shuttered and its “new” publisher, Ahoy Comics, appears to be on something of an upward trajectory. The premise here is that bored Jesus gets sent back to Earth by an even-more-bored God and takes up residence with a painfully obvious Superman analogue for reasons that I guess will become more clear in the fullness of time. I dunno, I got a kick out of it and everything, and Pace’s workmanlike “super-hero standard” art is pretty much pitch-perfect for the material, but I guess I was hoping for something a bit more sharp and incisive from the normally-quite-reliable Russell. As is, his “peace is the answer, not violence” messaging comes off as too obvious by half and the only actually interesting character is God himself, who is portrayed as the foul-mouthed and perpetually-disappointed old curmudgeon he probably would be if, ya know, he actually existed. I’m game to give this another issue or two simply due to my confidence in the abilities of these creators, but there’s nothing in this debut installment that would compel those unfamiliar with their work to stick around for more.

Black Hammer/Justice League : Hammer Of Justice #1, co-published by Dark Horse and DC, may just be the title that finally gets me off the BH “universe” spin-off bandwagon. Black Hammer ’45 showed signs that the franchise was finally being over-extended, and this proves it, as Jeff Lemire turns in a tedious script that sees these disparate groups of heroes teamed up under the flimsiest of pretexts and relies on rapid-fire expository to dialogue to bring everyone up to speed on who his (as opposed to DC’s) characters are, while Michael Walsh does his level best to at least make things look interesting — but can only do so much in that regard when the story is strictly “been there, done that” stuff. I don’t know what I was expecting from this comic — the concept screams “obvious cash-grab” and “so crazy it just might work” in equal measure — but it’s certainly fair to say I wasn’t expecting anything this out-and-out lousy.

Batman Universe #1 is a reprint collection of the Brian Michael Bendis and Nick Derington Bat-stories from those giant-size “specials” that DC puts out through Wal-Mart — and since I don’t shop at Wal-Mart and never will, I hadn’t seen the stuff and decided to give this first issue a go despite its absurd five dollar cover price. Lo and behold, it wasn’t bad at all — Derington’s a natural for the Dark Knight and should probably be drawing the regular series, and Bendis actually turns in one of his most solid scripts in years, a fun all-ages Riddler yarn. The only problem here — that outrageous price. I enjoyed this a whole hell of a lot more than I was figuring to, but if subsequent issues continue to go for five bucks a pop, I’ll be sitting the rest of this thing out on principle. I dunno why DC is over-charging for a standard-length book that contains no new material apart from the cover — hell, I don’t know why they’re making any of the moves they are these days — but fuck ’em and the horse they rode in on. With no more Batman ’66 on the racks, this is precisely the sort of antidote that’s needed to the grim, overly-dour shit that the other Bat-books have devolved into, but it’s almost as if they’re determined to dare you to be stupid enough to pay too much for it. Don’t be. 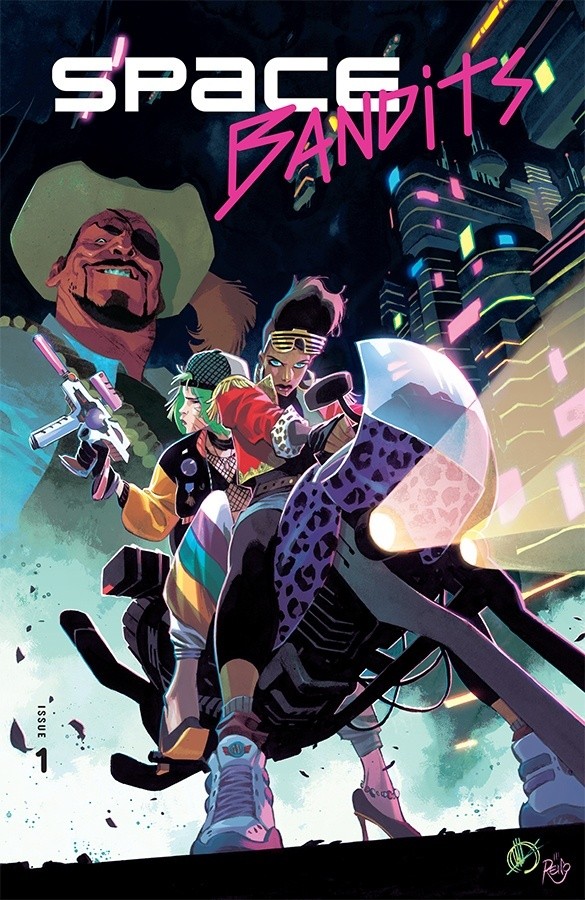 Space Bandits #1, is the book from last week I less-than-subtly made reference to at the outset and is the latest from the Image Comics/Millarworld/Netflix trifecta of corporate cash-gobblers — and it also continues the welcome and entirely out-of-left-field trend of these admittedly generic genre works being a hell of a lot better than they probably have any right to be. By my count, this is the fourth series that Mark Millar has cranked out since cashing in with his new paymasters, and with the exception of the risible Prodigy, they’ve all been surprisingly solid. There’s nothing new happening here, of course — two female intergalactic outlaws get screwed over by their partners/lovers, end up in jail, bust out, and join forces to get revenge on those who wronged ’em — but the dialogue and characterization are razor-sharp, the story’s just plain fun, and Matteo Scalera’s artwork is, of course, absolutely freaking gorgeous. We’re talking even more absolutely freaking gorgeous than his Black Science stuff, if you can believe that. Every instinct in my brain and body tells me not to get my hopes up, that this is just more ready-made-for- Hollywood IP, but the same was true of The Magic Order  and Sharkey The Bounty Hunter, and both of those exceeded all expectations by a country mile. Or a light year. Or whatever. Here’s another, I think. I can’t believe I’m saying this — much less that I’m saying it for the third time this year — but I’m “all in” on a freaking Mark Millar comic. Hell just keeps on freezing over, it would seem.

Another week down means another pitch at the end for the “sponsor” of this column, my very own Patreon site, where for as little as a buck a month you can have access to as many as three new rants and ramblings per week from yours truly on the worlds of comics, films, television, literature, and politics. That’s so goddamn cheap you literally can’t lose, so please — help support me and my work by heading over to https://www.patreon.com/fourcolorapocalypse