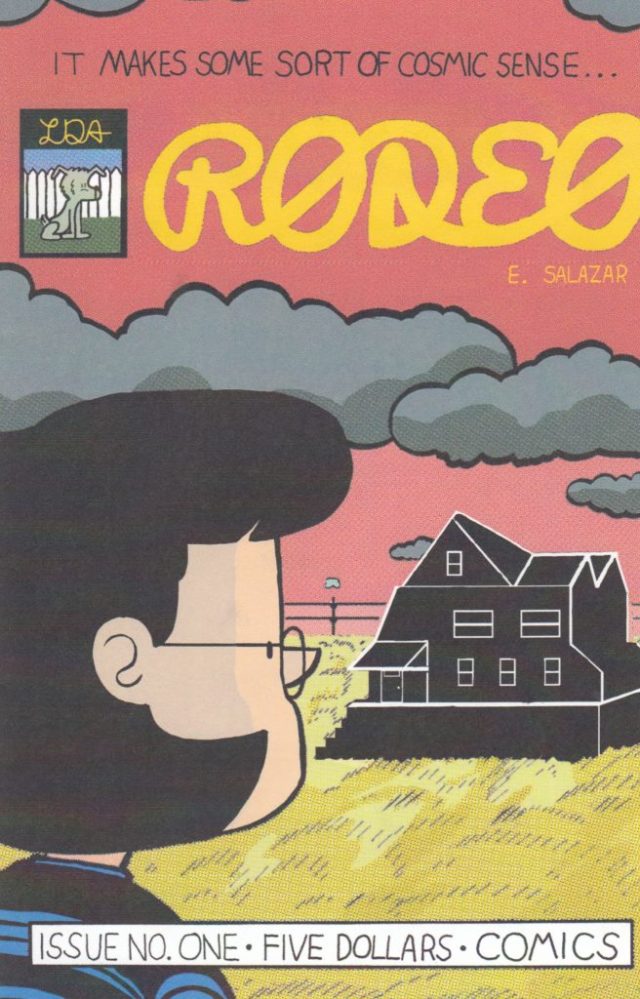 Most debuts, let’s face it, disappoint. Others show promise. A select few thoroughly satisfy. And then, every once in awhile, one comes along that literally demands you take notice.

“Spoiler” alert for lazy readers : cartoonist Evan Salazar’s new self-published mini, Rodeo #1, is definitely the latter. You need to buy it immediately. And that’s my cue to cut to the chase and tell non – lazy readers why —

Following in the tradition of the finest solo anthology titles such as Eightball and Yummy Fur, yet blazing a trail entirely its own, this comic arrives like a bolt out of the blue and announces the arrival of a talent  already tantalizingly close to attaining that elusive title of being “fully formed.” There’s a back cover “gag” strip that rather misses the mark, it’s true, but apart from that what we’ve got here is some seriously polished — though in no way devoid of personality — cartooning that uses strong blacks, clean lines, crisp-if-basic layouts, and a plethora of influences ranging from the likes of Michael DeForge to early-days (as in, when he was still good) Adrian Tomine to tell three wonderfully distinct stories that are nonetheless tonally and thematically cohesive, and reflect an authorial sensibility informed chiefly by “big-picture” concerns such as alienation, longing, and emotional and physical upheaval, but nearly as committed to drawing out the “little” things that actually make live worth living : dreams, quiet moments of deep poignancy, innocence, and emotional connection.

A vaguely Herriman-esque short about a cat that accidentally burns its house down and finds that freedom really is just another word for nothing left to lose sets the table at the outset and from there we go into the comic’s longest — and strongest — strip, a mystery story (of sorts) about a young girl named Abigail Knox whose mother disappears out of the blue one day and has her spot in the home assumed by one of her college professor father’s male students. To any adult reader it’s plainly obvious what’s going on here — as are the reasons for mom’s return later — but seen and told through the eyes of a bright, precocious, but in no way worldly kid, this simple premise becomes something equal parts unknown and unknowable, a makeshift canvas upon which a child’s imagination goes to work filling in the picture. Don’t let the youth of the protagonist fool you in any way, though : this is smart, sophisticated, emotionally resonant storytelling that honors its characters and gracefully eschews the numerous traps of easy irony available to it that lesser cartoonists would no doubt succumb to. Stunning, I believe, is the word I’m looking for.

Following on from this we meet night-shift maintenance man/janitor Rodolfo, a more practical modern iteration of Walter Mitty, who creatively filters his monotonous work duties through a literary lens and proves, at least to himself, that he has a future as a writer — or an editor. Again, at least. A more expert encapsulation of the gulf between fantasy and reality, and the power of what the hopelessly square dismissively refer to as “flights of fancy” to get us through the day (okay, night) I can scarcely conceive of, and it’s all delivered in a manner that’s entirely understated yet in no way impressed with its own admirable restraint. Short, sweet, and brilliant.

And then it’s all over with far too quickly, which is a great sign. I want more Evan Salazar work, and I wanted it before I was even through  reading this. What he’s crafted with Rodeo #1 isn’t simply one of the finest debuts of the year — it’s one of the finest comics of the year, period.

You’d be utterly insane to take a pass on this book. Order it for the entirely reasonable price of $5.00 directly from Evan Salazar at http://rodeocomics.storenvy.com/

And while you’re in a spending mood, please consider supporting my work by joining my Patreon site. For as little as a dollar a month you get access to as many as three new posts per week by yours truly focusing on the worlds of comics, films, television, literature, and politics. Plus, you’ll be helping me keep a steady supply of free content coming both here and at my trashfilmguru movie site. There’s tons of stuff up on there already, signing up is cheap — seriously, what have you got to lose? Check it out at https://www.patreon.com/fourcolorapocalypse

8 thoughts on “My First Time At This “Rodeo””