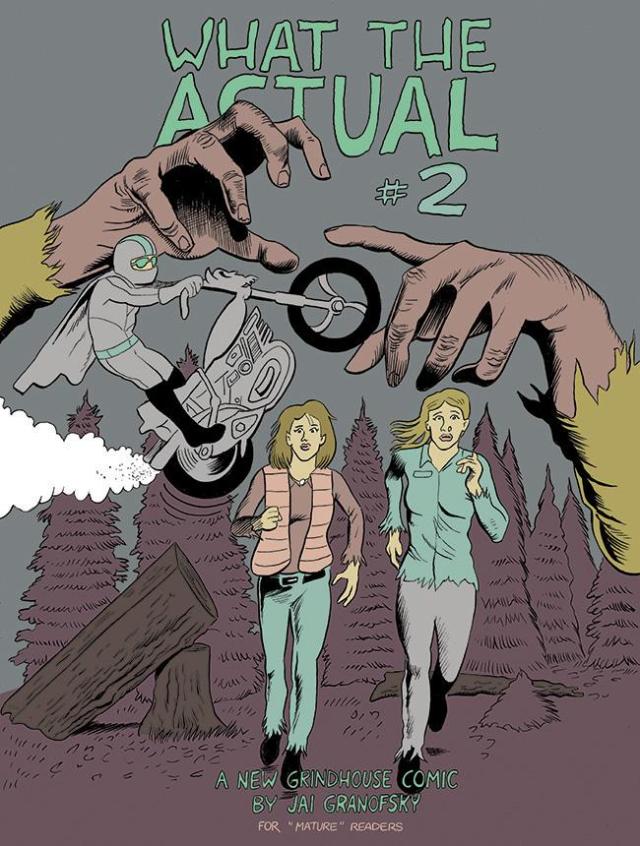 Not so long ago, I was pretty rough on the first issue of cartoonist Jai Granofsky’s self-published “solo anthology” series, What The Actual. I found it unfocused, uninspired, unfunny, and uninteresting. I took no pleasure in raking the book over the coals — I never do, particularly when it comes to “labors of love” — but I think (or at least I hope) that I avoided laying a “give it up and stick with the day job” type of trip on the artist himself. Certainly his solid “classical cartooning” style provides evidence enough that Granofsky has some talent, but my feeling was that his entire project was in need of a good, solid “re-think” from top to bottom.

Enter the just-released What The Actual #2, which isn’t exactly a complete re-tooling, but at least represents a kind of promising, albeit tentative, step in the right direction — and may in fact demonstrate that Granofsky himself was aware of the weaknesses on painful display in his series’ debut installment and was more than willing to take active steps to improve upon them. So, props to him for that. Seriously.

Now for the bad news, I guess — Granofsky is, by his own admission, going for a “grindhouse” vibe with this one, but his breadth of knowledge on the subject seems to extend no further than Quentin Tarantino’s Death Proof and maybe a handful of “B” horror flicks, his largely-interconnected strips here betraying not much more than a surface-level understanding of the entire exploitation ethos, he end result making for a pleasant enough initial pass-through but nothing that stands up to anything like a considered analysis.

Not that a comic necessarily has to, mind you — again, the main narratives here that see a motorcycle stuntman and a group of teenagers fleeing a shadowy demonic entity are a smooth enough read and the art’s easy on the eyes. But it’s still fundamentally an exercise in style over substance, a necessarily reductive invocation of a largely-moribund aesthetic that doesn’t elicit much beyond a “hey, I guess that was kind of fun” reaction.

Which, I suppose, makes it sound like a don’t really care much for “fun” comics — and I really don’t want to give that impression. We all need “throwaway” entertainment sometimes, and if you’re in the mood for that, you could do a hell of a lot worse than What The Actual #2. But I get the distinct impression that Granofsky wants to make something — if not profound, at least of significance. After all, he ‘s sinking his own hard-earned money into putting this book out into the world, and anyone who does that would probably, I hope, believe they had something worth saying. In fact, something worth people paying to experience. This comic is inching into that territory, but it’s not quite there — yet.

Still, I’ve got a lot more faith now that he’ll get there at some point. He seemed a million miles away from producing worthwhile work with What The Actual #1, but this follow-up has me thinking that maybe his first genuinely solid comic is just around the corner. I’m more than willing to hang out for another issue or two in hopes of seeing him get there.

What The Actual #2 is available for $6 from Birdcage Bottom Books at https://birdcagebottombooks.com/collections/comic-books/products/what-the-actual-2

While you’re following links around, please take a moment to check out my Patreon site, where I serve up exclusive thrice-weekly rants and ramblings on the worlds of comics, films, television, literature, and politics — for as little as a buck a month. Your support — in addition to being greatly appreciated, of course — also helps keep a steady supply of free content coming both here and at my trashfilmguru movie site, so when you look at is that way? You’re really getting a hell of a lot for your money. It can be found by pointing your browser in the direction of https://www.patreon.com/fourcolorapocalypse

2 thoughts on ““What The Actual” Is Happening With This Comic?”