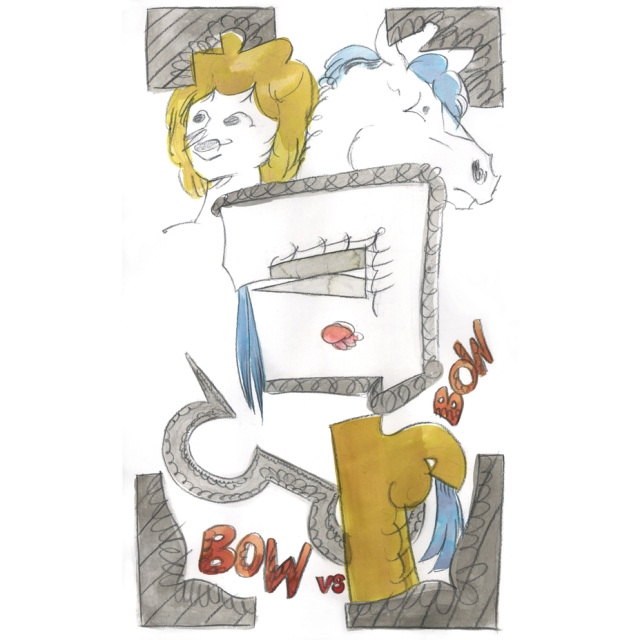 I don’t know if Leslie Weibeler intended to create a treatise on the dualistic nature of both art and existence with Bow Vs. Bow — a physically and aesthetically gorgeous Sonatina-published comic from, apparently, 2014 that flew so far under the radar that even I didn’t notice it upon release — but nevertheless that’s what we’ve got here, and if such wasn’t the author’s aim, it’s almost a more impressive achievement than if it were.

It might seem that a re-set would be in order after just one paragraph here — that going back and making sense would, ya know, make sense — but roll with me on this : Weibeler’s illustrations are breezy and maybe even slap-dash on a purely technical level, yet are imbued with so much weight and depth that they absolutely belie their own humble origins, and the same holds true for the poetic and experimental writing, on the surface very nearly random and haphazard, but under that surface communicating a quietly compelling narrative that’s emotionally complex and narratively simple simultaneously.

Shit — I’m just digging myself in here deeper, aren’t I?

Ah well, such is the nature of any considered analysis of a work this non-chalantly absorbing. When something immerses you without within the world it creates without your even noticing it, that’s powerful in the extreme — and the most powerful thing about this book’s immersive nature is, in fact, how entirely unforced it is. Could this entire comic, then, ultimately be a self-referential commentary? A piece of art that is about both itself and the act of its own creation?

It’s a possibility I’m more than happy to consider — but only one among many. And the question of “what’s it all about, then?” may, in fact, have conflicting as well as multiple answers in this instance. And it also may not. Which should, by all rights, be a confusing and confounding thing to consider — but the fact of the matter is that it’s just not. And how that works is something I’m still trying to piece together — which, I suppose, is why I’m a critic and not an artist. Because if I were capable of creating something this insular and universal at once, and to go about it in a way that made that dichotomy seem more complementary than it was contradictory, I surely would do so.

Needless to say I can’t, but Leslie Weibeler can — and has done. Which, on the one hand, exhausts everything — no doubt paltry as it is — I have to say about Bow Vs. Bow, but really only scratches the surface.

Again with the duality, I know — but this comic’s duality is an expression, as well as the backbone, of its own totality. And possibly even of all totality. And that totality both encompasses and reflects all the elements at play within it — the poetic flow and pulsating, percussive rhythm of the give-and-take betwixt and between the bow of  the archer and the bow of the violinist, a tug of war that’s neither a tug nor a war, but more undeniable than each separately or both in concert.

Plain truth : I don’t just admire and respect what Weibeler has achieved here — I’m in awe of it.

Bow Vs. Bow is available for $10 from Austin English’s Domino Books distro at http://dominobooks.org/bowvsbow.html

And if you’re in a spending mood, please consider supporting my ongoing work by joining my Patreon site, where you get thrice-weekly rants and ramblings from yours truly on the worlds of comics, films, television, literature, and politics for as little as a dollar a month. The link for that is https://www.patreon.com/fourcolorapocalypse