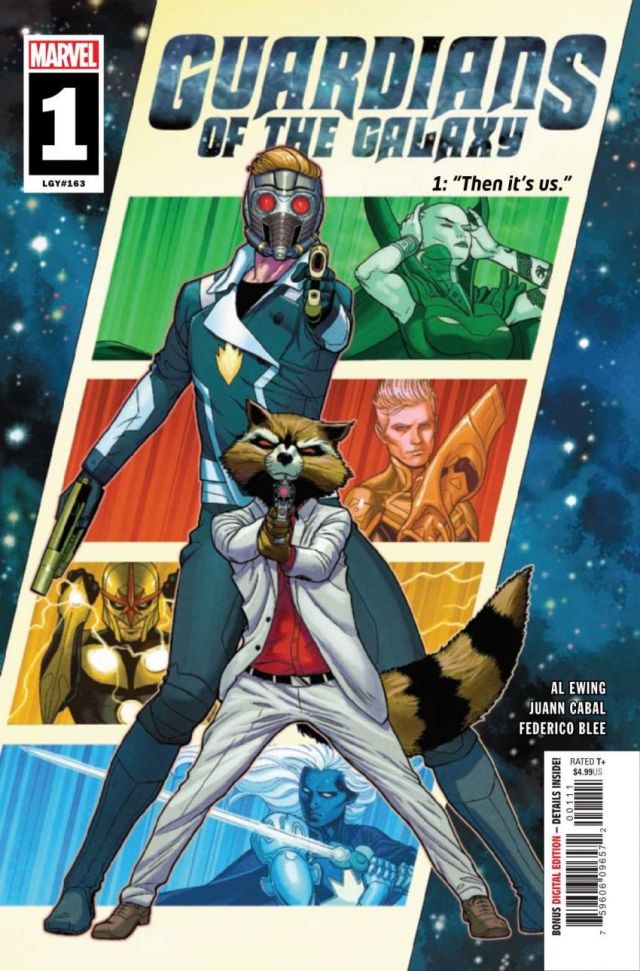 Just when you thought you’d probably seen the last of this column — anyway, it’s not that I’ve been missing my usual Wednesday comic shop pick-ups, it’s more a case of nothing standing out all that much. Which, in fairness, is also the case with a couple of the books this week, but I wanted to get “back in the saddle” with doing these Round-Ups every seven days, so now’s as good a time as ever, right? We’ve got one first issue and three last issues to look at this week, although it turns out that two of those last issues are actually anything but, which we’ll deal with in due course —

Guardians Of The Galaxy #1 marks yet another re-launch of Marvel’s premier cosmic super-team, this time courtesy of mega-popular Immortal Hulk scribe Al Ewing and artist Juann Cabal. This one referred back to events of the previous volume so frequently that I was frankly a little lost, not having read that run myself, and the team’s makeshift lineup seems more than a bit different, as it essentially amounts to Star-Lord, Rocket Raccoon, and last-second conscripts such as Nova and Moondragon, but the premise is pretty nifty : the Greek Gods are really aliens from another dimension and they’re popping in and out of ours in order to abscond with the energy needed to power theirs and, ya know, cause general havoc and such, but in all honesty this is a pretty discombobulated way to try to bring new readers into the fold — which may not be the point of first issues anymore, anyway, for all I know. Cabal’s art is fairly standard super-hero stuff, but he does serve up a rather inventive double-page spread or two, so points for that. All in all, though, I gotta say that there’s not a tremendous amount here that compels me to come back for the second issue. I’ve got a tremendous amount of faith in Ewing, but I think I’ll kick back and maybe come back to this one in trade if I hear enough positive word-of-mouth in the coming months. Now, let’s shift gears from the alphas to the omegas —

American Gods : The Moment Of The Storm #9 marks the conclusion of Dark Horse’s three inter-connected series adapting Neil Gaiman’s best-selling novel, and while writer P. Craig Russell and artist Scott Hampton have done a fine job with this long-term assignment, this issue feels more like an extended epilogue, the story proper having more or less wrapped up last month. Still, there’s one final situation for the luckless Shadow to face, and it’s nice to get one more frisson of tension before everyone goes on to their final reward. I’m kinda gonna miss this book — it’s been a constant, reliable, steady companion for a few years, after all — but I didn’t get overwhelmed by any particular pangs of premature separation anxiety as I read it or anything. All told, then, a low-key ending that’s faithful AF to it’s “source material,” but comes off as being a little — anti-climactic, maybe?

Once & Future #6 feels like a really solid and satisfying wrap-up to Kieron Gillen and Dan Mora’s revisionist Arthurian adventure yarn from Boom! Studios — and truth be told it is — but appearances can be deceiving. After some breakneck action, some last-minute unforced exposition, and some well-executed tying up of various plot threads — as well as page after page of killer art — a double-page “end credits roll” gives way to an unexpected “post-credit sequence” that sets things up very nicely for a sequel. Which, of course, I’ll pick up, because this series has been a hell of a lot of fun, but it stands well enough on its own, too, minus that little after-the-buzzer cliffhanger. So, hey, if you wish, you can blow that off and walk away from this one feeling as though Gillen and Mora have delivered a clever, topical, stand-alone story. Which they have, it’s just that more is on the way — and in this case, that’s a good thing.

Second Coming #6 actually hit LCS shelves last week courtesy of Ahoy Comics, but my shop got shorted on it, so I’m a little late to the party having just gotten a copy this Wednesday — and, again, this isn’t really then end of the road, it just marks the finale to the first “season” of Mark Russell, Richard Pace, and Leonard Kirk’s Jesus-and-analogue-Superman “buddy book.” It’s a bit of a curious beast — Jesus and the devil face off one more time, complete with absolutely unexpected (and unexpectedly truncated) resolution, while our cape n’ tights vigilante and his wife get served the biggest surprise of their lives. The former is a genuine surprise in its tone and execution, the latter — not so much, really. Some of the overly-obvious takes on Christ’s teachings have seemed kinda heavy-handed to me throughout the course of this series, and don’t ask me where the hell the supposed “controversy” surrounding the whole thing even comes from, but Russell’s satire has been uniformly sharp, and both Pace and Kirk have done a bang-up job illustrating their respective sections of the book, so — what the hell, I’m down for more. And the extended preview of Russell and Steve Pugh’s  Billionaire Island at the back does more than enough to convince me that one’ll probably worth my time and money, as well, since a little bit of class-conscious commentary almost always livens up genre storytelling in my estimation.

Okay, the old saddle’s feeling pretty comfortable, so I’m ready to speed up from a trot to a gallop. Let’s do this again next week, shall we? Until then, it’s reminder time : this column is “brought to you” by my Patreon site, where I serve up exclusive thrice-weekly rants and ramblings on the worlds of comics, films, television, literature, and politics for as little as a dollar a month. Do me a solid and check it out by directing your kind attention to : https://www.patreon.com/fourcolorapocalypse