The second self-published mini from earlier this decade by Australian cartoonist Mandy Ord that we’ll be looking at here also focuses on a natural theme, this one being water, and like its “companion” comic, Cold, this one — titled, simply and appropriately, Water — broadens its basic premise out to encompass Ord’s personal experience with the subject in question at key junctures in her life.

We’re treated to four interconnected strips in these 40 pages, and the interesting thing is that Ord has chosen to relate autobio experiences focusing on both water’s absence (desert hiking), its abundance (a heavy rainstorm), and its conservation (water collection), thereby covering the extremes of human interaction with, and dependence upon, water from both extremes, as well as all points between. It’s a simple enough idea, I suppose, but no less bold and resonant for that fact. 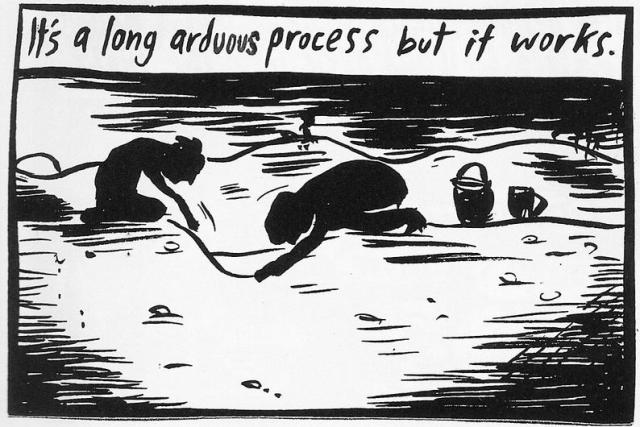 Plainly speaking, some premises are so obvious that they can’t help but work, and I would humbly submit that this is one such instance — or, if you will, four such instances expertly stitched together to form a singular whole. Ord clearly has learned to develop a kind of reverence for water itself that our ancestors, and those whose lives are still more intimately tied to nature in this day and age, knew and know all too well, but that us modern urbanites (and I suppose suburbanites, as well) are completely divorced from on a pretty fundamental level — unless there’s a lengthy drought going on, as was the case in California until fairly recently. We may take for granted that water will always be there for us, in more or less precisely the proportion we require it, but Ord suffers no such delusions, because she’s experienced situations where it was anything but.

Which sounds like pretty heavy subject matter, I’ll grant you — largely because it is — but Ord never fails to approach her own life and the experiences that have shaped it with a gentle, humorous touch that’s utterly charming and never less than absolutely tonally appropriate.  That skillful approach especially shines through in these “relationship-with-the-elements” narratives, and is frankly even downright necessary to keep the proceedings from devolving into some kind of droll, if well-enough-intentioned, treatise on the subject at hand. Think of it as the difference between a monologue delivered at readers, versus a personal reminiscence (or a series of them, as the case is here) told to them.

And, of course, Ord’s signature thick, rich, ink-drenched line adds an even greater degree of personalization to this admirably unpretentious, unassuming work. Her style is nothing less than absolutely singular, and both reflects and amplifies her disarmingly intimate narrative point of view perfectly. Creatively speaking, she fires on all cylinders at all times, and even though my “sample size” of her work is an admittedly small one, consisting of precisely two mins, I can say with full confidence that this is, in fact, always the case. She knows only one way to make comics — her way — and trust me when I say that you wouldn’t want it any other way.

As was the case with Cold, reviewed on this very blog just yesterday, this is a comic you not only don’t want to miss, it’s one you need. And it’s one you’ll find yourself returning to, and enjoying every bit as much, time and time again.

Water is available for $4.00 from John Porcellino’s Spit And A Half distro at https://www.spitandahalf.com/product/water-by-mandy-ord/

Also, this review — and all others around these parts — is “brought to you” by my Patreon site, where I serve up exclusive thrice-weekly rants and ramblings on the worlds of comics, films, television, literature, and politics for as little as a dollar a month. Subscribing is the best way to support my ongoing work, so I’d be very appreciative indeed if you’d take a moment to check it out by directing your kind attention to https://www.patreon.com/fourcolorapocalypse