The last week of new comics until who-knows-when owing to the Diamond shut-down — okay, owing to COVID-19 is probably a more accurate way of putting things — yielded a mixed bag of reading for yours truly, so let’s take a look at what was in said bag before this column goes on hiatus (to be temporarily replaced by a standard full-length review post of a small press or self-published comic, as is my usual wont around these parts), shall we? Indeed we shall —

While it’s nice to see Alan Davis back drawing the House of Xavier — and it’s kinda nice to see the House of Xavier itself, come to think of it, given that it’s been abandoned in favor of the mutant island nation of Krakoa — Jonathan Hickman’s script for Giant-Size X-Men : Nightcrawler #1 reads like precisely what it is : an 8-page backup strip extended out to 30-ish pages so Marvel could charge five bucks for it. In other words, this is a naked cash grab — but then, so is the whole extended X-line these days, consisting as it does of, what? A dozen titles, at least? And now a slew of one-shots are forthcoming as well, this being the first. Nightcrawler is pretty much relegated to the role of a supporting player in this book bearing his own name about a small band of mutants, under his nominal “leadership,” heading back to Xavier’s School for Gifted Youngsters to see why the portal to Krakoa located there is fucking up. If this were a short yarn, it would probably be a fun one, but there’s nothing here to hang an “extra-length” issue on, even if Davis’ art is a fun mix of his usual signature style with a hint of Dave Cockrum homage around the edges. Buy it if you’re a completist, I guess, but otherwise give it a pass — and let’s hope that Marvel avails themselves of the opportunity to trim the glut of X-titles down by at least half during this economic downturn. 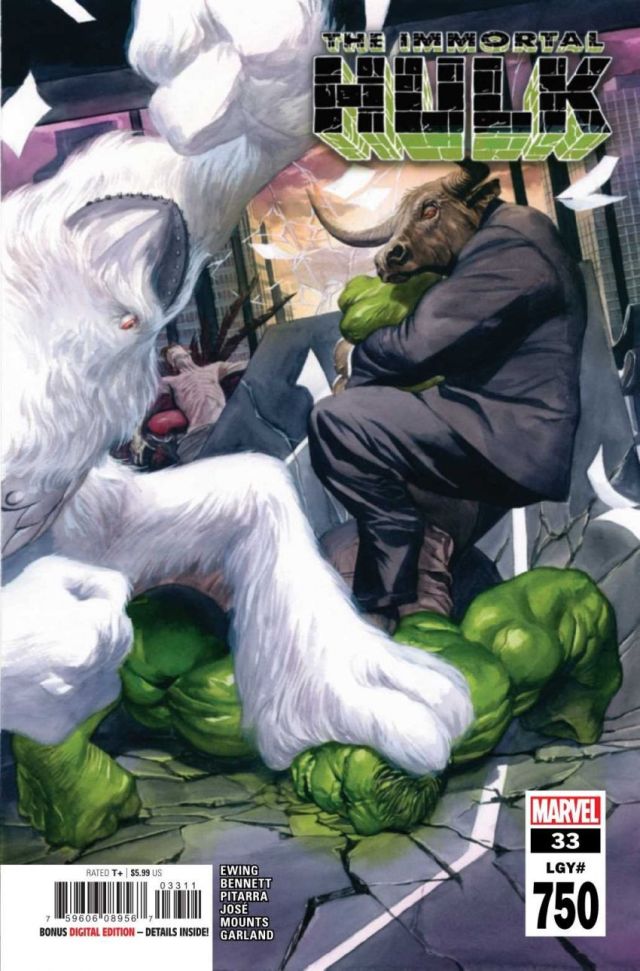 Sticking with Marvel, and with higher prices, The Immortal Hulk #33 carries a six dollar price tag and a couple dozen or so extra pages due to the fact that it apparently marks the 750th issue of any and all Hulk comics, provided you go by the so-called “legacy” numbering.  This has a suitably “epic” feel to it, and features the climax of the current (okay, now former) story arc pitting big, green, and mean against the false-memory-implanting alien monster known as Xemnu, and while Al Ewing brings things to a more than satisfactory close — while also setting the table for some intriguing shit to come — it’s the eye-candy art that steals the show here, with Joe Bennett serving up some of his very best double-page splashes and batshit-crazy character designs yet, while guest second-fiddle (or should that be co-star?) Nick Pitarra knocks it out of the park with his tripped-out “mindscape” pages.  Another absolutely essential issue of the best “Big Two” series of the past decade — and probably the next one, too.

At this point Red Sonja seems to be Dynamite’s X-Men, spawning any number of crossovers in recent months, and now it’s got its first spin-off miniseries. Killing Red Sonja #1 teams regular scribe Mark Russell with co-writer Bryce Ingman to tell the story of the entitled little shit son of the aloof and stupid emperor of Zamora recently killed off in the pages of the “flagship” RS series, with half-assed art provided by one Crair Rousseau, who’s clearly going for some kind of singular, idiosyncratic look, and just as clearly falling well short of the mark and simply producing work that looks sloppy and out of place for its genre. Fortunately, Russell and Ingman are penning an interesting tale about a complex and intricately-plotted revenge scheme from the point of view of the asshole doing the plotting, so it’s a fun and interesting read, and Christian Ward’s cover, as you can see above, is just plain — errmmm — killer. I’ll ride this one out even though the art blows.

And the last “capsule” review I’ll be writing until new books start getting shipped again is for Vault’s No One’s Rose #1, an “eco-thriller” that sees Zac Thompson paired not with his usual writing partner, Lonnie Nadler, but with newcomer to the scene Emily Horn, while the art chores are handled by one Alberto Jimenez-Albuquerque. The story here takes place within the confines of a “bio-dome” powered by renewable energy to protect its inhabitants from the post-apocalyptic shithole the rest of the planet has become, and focuses on a sibling rivalry between a genius young scientist determined to make Earth inhabitable again, and her douchebag brother who wants to make sure that never happens. The characterization is about as unsubtle as it gets, and the script is overly verbose, but it’s also pretty damn interesting and well-thought-through, and the art is slick, lush, and generally pretty gorgeous, so I’m interested to see where this goes — if, indeed, it goes anywhere at all. Or should that be — has anywhere to go to? The longer this crisis goes on, the greater the number of shops that simply won’t be there once it’s all over, so please — now is probably the most important time ever to support your local comics retailer of choice. Assuming you’re allowed to leave the house, and they’re allowed to open their doors.

And on that joyous note, we’ll adjourn the Weekly Reading Round-Up until there’s new stuff on LCS shelves. I’ll miss my Wednesday ritual of picking up my books, reading them (and taking some quick notes on them as I do so) at my favorite coffee shop, and then cranking this thing out on Saturday night, but it’s not like this blog is going anywhere, it just means that our one tether to the comics mainstream is temporarily severed. And, of course, also still very much a going concern is my Patreon, this column’s unofficial “sponsor,” where I will never cease to offer up thrice-weekly rants and ramblings on the world of comics, films, television, literature, and politics for as little as a dollar a month. Subscribing is the best way to support my ongoing work, so I’d be very appreciative indeed if you’d take a moment to check it our by directing your kind attention to https://www.patreon.com/fourcolorapocalypse