Confession time : I hate “Secret Santa.” Not out of some general antipathy toward the Holiday Season in general — although that plays a part — but more because the “exchange” either forces you to view somebody you likely don’t really know all that well as a generic, interchangeable type of figure (“I’ll get them a pair of ugly Christmas socks! That’ll be fun!”), or to actually get to know more about them than you care to in order to pick out a gift they might genuinely like. But what the hell do I know? Consistently-fascinating cartoonist Keren Katz (covered most recently around these parts in my review of her latest full-length book, The Backstage Of A Dishwashing Webshow) says it’s her favorite game, and she’s found a unique way to express her love of it in her latest mini, Chapter Two, which is number 83 in the venerable Mini Kus! line from Latvian publisher Kus!

And by “a unique way to express her love for it,” I think I mean “it sure looks like she hates it.” In fact, the whole exercise comes off as downright frightening here in this rapid-fire work, which reminds one of O. Henry’s classic The Gift Of The Magi on at least four tabs of bad acid. The setting is esoteric and ephemeral, though vaguely rooted in reality — as is typical for Katz — and the same is true for the characters, who seem to ramp up natural human desires and impulses to extremes, and as a result end up taking what’s ostensibly a harmless Christmas tradition and escalating it to levels of depravity right out of the pages of J.G. Ballard’s High-Rise. Whereas Ballard’s cast inflicted their one-upmanship on the environment and people around them, though, Katz’s tight ensemble embark on individual paths of self-destruction, with predictably tragic results.

And while we’re talking about results, I suppose I should come clean right now and let all you fine prospective readers know that this comic wraps up with an ironic “twist” ending, which could understandably be a deal-breaker for some — that “some” including me, on most occasions — but actually really works in the context of this narrative; not because it hits out of the blue, but because Katz has so meticulously and precisely set the stage for it from the outset. In fact, for a book that trades so heavily in the poetic both visually and narratively, the tightness of its plot construction is really impressive.

That being said, this work is nothing if not admirably fluid. Katz’s collage-influenced imagery takes a unique and even playful approach to form, figure, and texture, adapting to meet each individual moment with little to no regard for dull, physical “reality.” This is highly expressive stuff, each discrete single-or double-page “splash” coalescing into an unbreakable, though not necessarily definable, whole. It might sound pretentious to say that there’s an inherent musicality to this entire comic, but I’ll be goddamned if it’s not the truth, regardless. 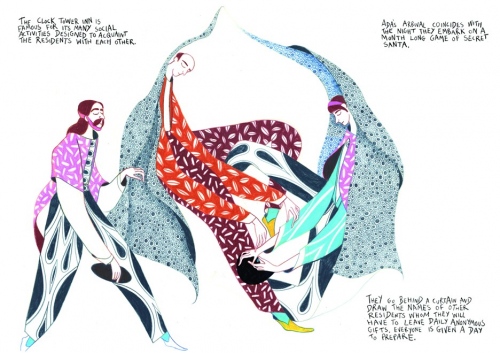 As with many of the best contemporary “art” comics, there’s an interpretive quality to this, as well, the dance between people and objects — as well as people and each other — being open to any number of valid analyses depending on the point of view of any given reader. There’s a holistic sense of inter-connectedness to all of it, no question, but in a very real sense, each figure dances alone, too. A relatively “straightforward” story typically isn’t this challenging, but this one is, and for that we should all be grateful.

This one gets a strong “buy” recommendation from this critic, then, and if you can’t fit it into your budget, who knows? I may just send you a copy as a “Secret Santa” gift come the Holidays. Or not.

Chapter Two is available for $7.00 from the Kus! webshop at https://kushkomikss.ecrater.com/p/35759362/chapter-two-by-keren-katz

Review wrist check – I was wearing my Squale “1521,” classic blue dial model, as I wrote this one, riding the Marlin “seat belt-style” strap from BluShark’s “AlphaShark” collection. On a scorching summer day, this is a tough combination to beat with shorts and a short-sleeve shirt.