The old saying goes that “you’re either on something, or you’re onto something” — and it seems as if Minneapolis cartoonist Peter Faecke might just be onto something with these “flip-book” split releases that he’s been doing, so after sharing the workload and cover space with A. T. Pratt for last year’s Wacky Western Double Digest, he’s back with a new dual release with one of my absolute favorite emerging cartoonists, Drew Lerman, this one focused on a detective story theme and bearing the admittedly unimaginative, but nevertheless apropos, title of Detective! Double Digest. So, yeah, it’s exactly what you think it is.

Especially if you think it’s going to be good, because this top-notch mini in certainly that. The two-color riso printing scheme employed by publishing imprint Really Easy Press is spot-on, the black/gray and pink gradations bringing the whimsical tone of both the stories and the art right to the surface, while the cardstock covers and high-quality paper are nice touches that give good value for money — but it’s the cartooning on display in these 24 pages that matters most, and if you know either of these artists, you know they’re not likely to disappoint. 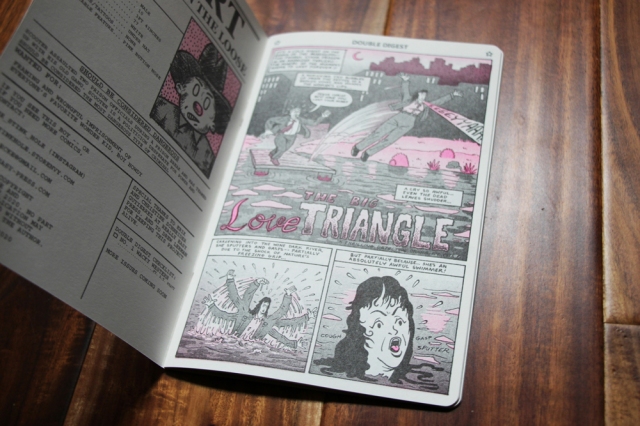 And, of course, they don’t — Faecke’s prior work ably demonstrated his skill at what I would call in a pinch “reverential pastiche,” playing up the absurdities of genres ranging from the western to the superhero to the paramilitary vigilante yarn to the sex comic while showing a level of respect for them that’s far from the ironic and begrudging tone that too many lazily fall back on too often, and that pattern holds here in this tale of world-weary gumshoe Ira Hurt taking on a missing persons case that absurdly but entirely expertly morphs into the “Love Triangle” of the strip’s title. There’s little by way of thematic depth to be found, it’s true, but what of it? Faecke’s intentions are clear on their face and the more classical cartooning style that he adopts for this project isn’t just pitch-perfect, it also showcases his skills as a pure illustrator to a greater degree than any of his previous ‘zines barring, perhaps, his “Bronze Age” comics send-up Hand Of Misery. His humor here is also well-timed, and he gets the balance just right in terms of using it to accentuate, rather than overwhelm, his narrative. Yes, the whole thing has its tongue firmly in its cheek, but that doesn’t mean he’s shitting on old-school detective fiction — rather, he’s just reverent enough to show he understands the genre’s ins and outs, but just irreverent enough to adopt a slightly askew take on it. This is a comic by someone who obviously digs comics — not just making them, but reading them — and something like that is always a joy to spend some time with. 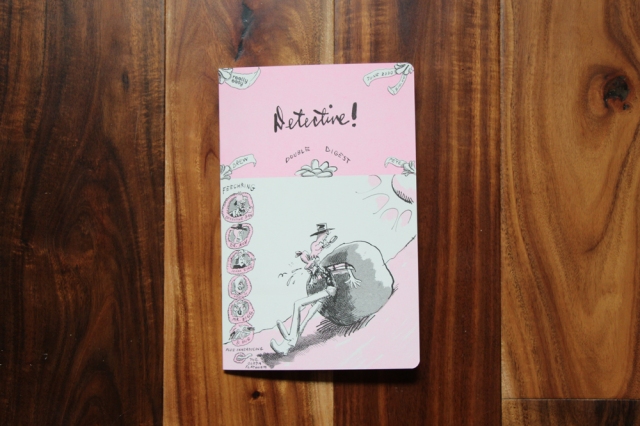 Flipping things over to Lerman’s “B” side (or maybe it’s the “A” side, take your pick — not that it particularly matters either way), we find him spinning a tale centered around Dav and Roy, the hapless protagonists of his superb Snake Creek strip, who here adopt the trappings of, and set up shop as, a pair of amateur sleuths and quickly find themselves hired by a “femme fatale” of sorts whose daddy is a billionaire. And a nutcase. Funny how the two usually go hand in hand. But there’s even more going on with him than first appearances would indicate, which means you get a lot of story crammed into these 12 pages, even if it’s delivered at Lerman’s trademark laconically dense (I promise, that only sounds crazy) pace. 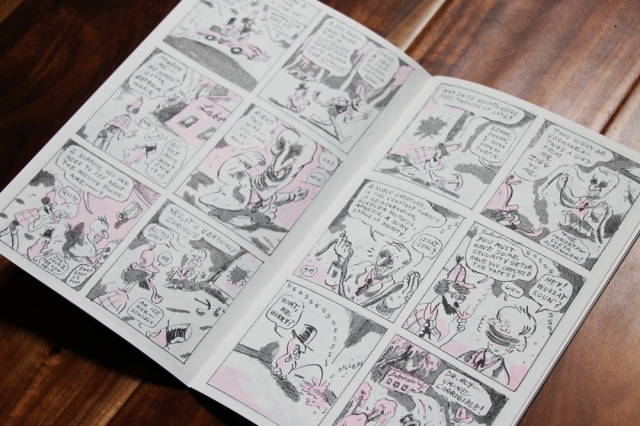 Honestly, both of these strips are so damn enjoyable — and so damn well-drawn — that picking a favorite is a pointless exercise, and so I shan’t. What I will say is that both do exactly what they set out to do, and you’ll find plenty of value in contrasting the work of both cartoonists for their similarities and their differences — and that study in contrasts will leave you with a greater appreciation for how each approaches and executes their craft.

To put it as mildly as possible, then, it’s safe to say you really want to get your hands on this comic. You’ll read stuff this year that’s better, and plenty that’s worse, but you’ll be hard-pressed to find anything that’s more sheer fun.

Detective! Double Digest is available for $10.00 from The Stink Hole at http://thestinkhole.storenvy.com/products/30493732-detective-double-digest

Review wrist check – dressing things up today with my Zodiac “Olympos” gold dial model riding a Hirsch “Genuine Croco” strap in green. This watch looks plenty sharp on its black factory-provided strap, but hey — I think the green really kicks it up a notch. I don’t see myself needing to put on a suit anytime soon (at least I hope not), but if I had to, this is the combo I’d wear with it.

2 thoughts on “Double Your Reading Pleasure With “Detective! Double Digest””