A few years back, I got a bunch of shit on Twitter for telling a newbie comic critic who said “I’m really not comfortable talking much about art yet” that they had no business reviewing works in this medium until they were. Now, granted, this individual was likely mostly — if not entirely — trying their hand at reviewing “Big Two” stuff, but even still : if all you’re talking about is the writing, then you’re giving short shrift to the person who spends more time than anyone else working on the latest issue of Justice League or The Avengers or whatever. And you wouldn’t have the capacity to review an extraordinary work like Aidan Koch’s House Of Ruin, Volume II at all. The question is — do I?

This new small paperback from Koch is, you see, a collection of drawings and nothing else — but it certainly doesn’t need to be anything other, to say nothing of “more,” than that. In fact, counter-intuitive as it no doubt sounds, this austere pocket-sized publication is certainly as immersive as any sequential art “story,” per se, and may even tell a story of its own — it’s just that you have to parse it out for yourself. What’s not to love about that?

I’m familiar with Koch by way of her thematically and formally experimental art comics, and I’ve seen some of her tattoo work online, but this was my first exposure to her pen-and-ink drawings all by their lonesome, and while the subjects of her artistic eye range from the mystical to the mundane and back again — indeed, they’re often juxtaposed right next to each other — her image placement, intuitive as it no doubt is, guides the observer on a journey that somehow never induces whiplash and indeed retains a sense of conceptual fluidity no matter how drastically different one object/person/creature may be from the one which preceded it. And deciphering how that works — how that even makes sense — is the real key to unlocking the (sorry to drop this term, but) magic herein.

To my mind, the hidden secret Koch taps into and channels in equal measure is oh-so-easy to talk about but oh-so-difficult to practice : simply put, she just plain trusts her instincts. Clearly there is a stylistic through-line that unites these drawings in terms of their creator’s preferences for clean lines, rich shading, and expertly-placed texturing effects, but never does she fall into the traps of being flashy for its own sake or altering her view of things for the sake of meeting the potential expectations of prospective audiences. The statements made here are simple and clear and honest, and the style they’re rendered in is largely the same, and due to that the entire project has a tight and cohesive feel to it even if the “pace” it flows at is decidedly relaxed and invites you to linger for as long as you’d like. 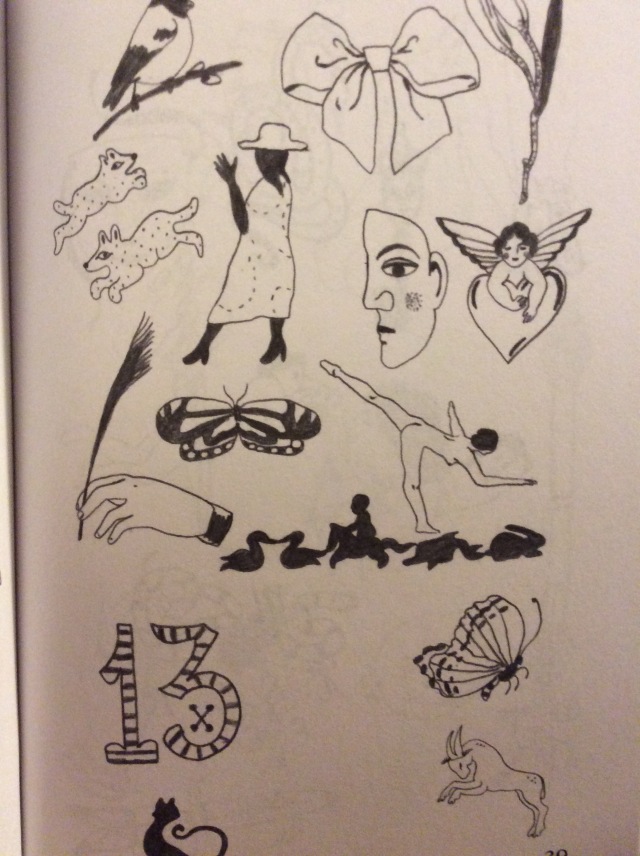 Now, being this is a self-published collection, commenting on its packaging is not only “fair,” it’s absolutely integral to the experience of taking it all in, and on that score Koch also hits all the right notes : the printing is crisp and sharp, the paper just the right thickness and consistency, and the overall minimalist aesthetic in terms of its covers and publication design is pitch-perfect for allowing the work to not just speak for itself, but to modulate the metaphorical volume of its equally-metaphorical voice to the correct level — complete with pitch, tenor, treble, bass, and all that — for each drawing. Again, I can only assume this is the product of her confidence in her own vision and technical prowess both, so in the end what we have here is a showcase of aptitude, yes, but also of intent, delivered without the aid of one single extraneous bell or whistle.

As the image above shows, there’s also a House Of Ruin, Volume I that’s available, and I’m certainly going to have to track that down in fairly short order, but until that shows up in the mail I’m more than happy to spend more time with this second collection, secure in the knowledge that I’ll be freshly amazed all over again each time I open it up.