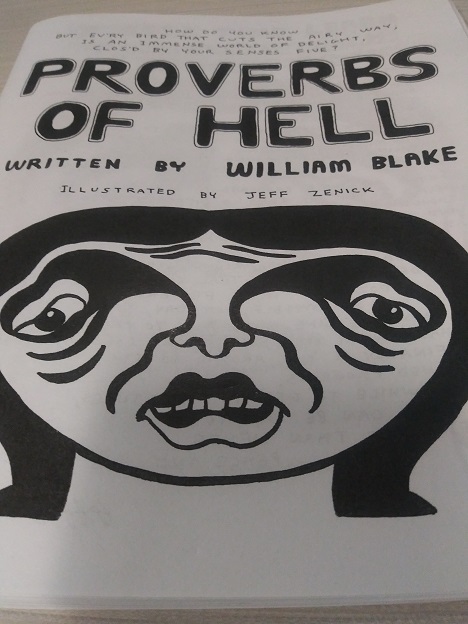 You literally never know what Jeff Zenick is going to come up with next, and that’s one of the most interest things about him : he’s an artist who never sits still or rests on his laurels, who never fails to find a new way to express himself via his portrait work. In recent years he’s turned his skilled eye and hand to reproducing criminal mugshots and vintage high school yearbooks, and now he’s trained his talents on a subject that would likely vex just about anyone : William Blake.

Well, okay, not Blake himself per se, but the 70 aphorisms included as part of his epic The Marriage Of Heaven And Hell, which have apprently wormed their way so deeply into Zenick’s mind that he’s literally been ruminating over how to approach this project for nearly 30 years, having first attempted to give it a go in truncated form as a mini comic way back in 1991. To say a lot of thought went into the just-released (and, as always, self-published) Proverbs Of Hell would, then, be a massive understatement indeed.

Zenick is probably channeling more than Blake here, though : he seems to have tapped into his inner Charles Burns pretty directly (and successfully) as well, his heavy black inks and stark approach to exaggeration, shading, and expression really kicking up into another gear in this ‘zine. The rotating handful of characters he’s depicting this time around appear to be in various states of distress both mental and physical, some of which would seem to bear direct correlation to the proverb their face appears beneath, but sometimes the connections are more oblique or intuited, and one is left wondering about not only the wisdom of Blake’s words, but the choices Zenick makes as an artist. It all makes for a heady experience, but fair warning : if you’re prone to a heroic self-image, this is gonna disabuse you of that goofy notion in a hurry.

Still, Zenick’s never been one for letting his readership off easy any more than Blake was, so there’s a fair amount of sympathetic resonance to be gleaned from every pairing of the former’s pictures with the latter’s words in these pages. This is portraiture that showcases the lost and the forlorn, absolutely, but whether or not that’s because these folks are considering Blake’s writing, or are simply reflective of it naturally is something I can’t quite nail down — and maybe I’m not supposed to be able to. Either point of view works, that much I know for certain, so no matter what Zenick’s intention is, he achieves it — and how often does a sentiment like that even make concrete sense?

And that brings us to another consistent strength of Zenick’s work : it’s interpretive on its face (pun only slightly intended), but it’s never deliberately oblique. He starts with a firm concept and executes it to the proverbial “T,” but his concerns, and subsequent approaches to expressing them, are inherently non-dictatorial. He never goes so far as to tell you what to think or how to analyze his creative output, but he’s never less than absolutely upfront at the same time. This belies a fair amount of confidence on Zenick’s part in his own abilities, sure, but it also shows tremendous faith in his readership, and in their ability to pick up what he’s throwing down. You never feel lost in a Zenick ‘zine, then, this one being no exception, but you literally never know what’s waiting for you on the next page, either — only that it will logically and aesthetically flow from what’s come before and into what’s coming next.

It could fairly be said, then, that there is a trajectory to be found in this work, although not necessarily a linear one. Each image tells a story in and of itself, but taken in succession and in total, a larger picture emerges : of a fallen humanity crumbling when faced with the intractable edifice of visionary insight, perhaps — or, if you prefer, of a fallen humanity that bears out the wisdom of said insight by dint of both their existence and their approach to it. Take your pick, or go with them both, it matters not — this ‘zine is pearls before swine either way. And I say that as one of the swine myself.

Proverbs Of Hell is available for $6.00 from John Porcellino’s Spit And A Half Distro at : https://www.spitandahalf.com/product/proverbs-of-hell-by-william-blake-and-jeff-zenick/

3 thoughts on ““Proverbs Of Hell” : The Marriage Of Zenick And Blake”