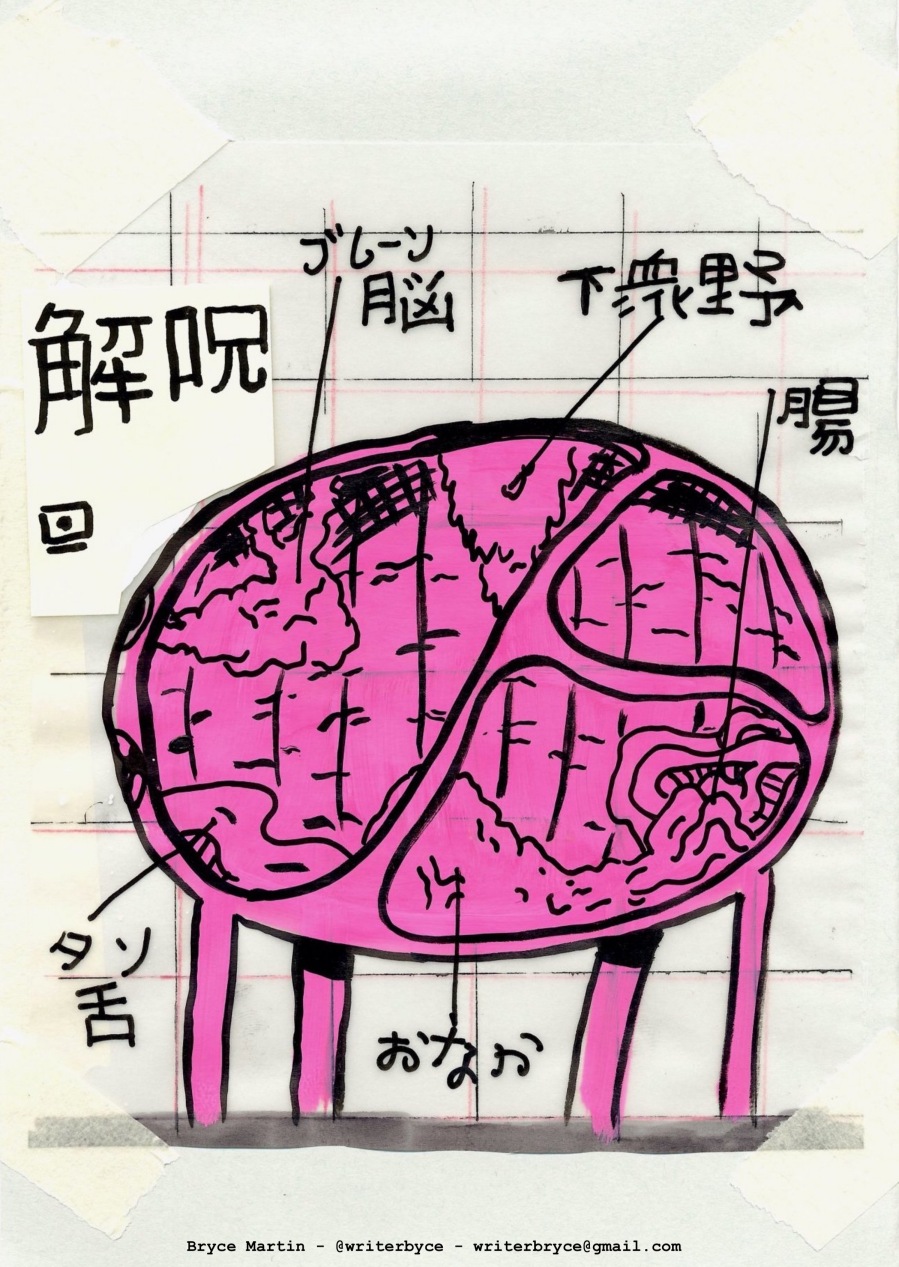 Normally, I tend to think that artists who don’t bother to put a title on their works are either being lazy, pretentious, or both — but after reading Bryce Martin’s recent self-published mini Untitled, I have to admit : If I were him (and he should be damn glad I’m not), I don’t know what the hell I would call this thing, either. In fact, even describing it is tough enough — and I say that as someone who at least likes to think that they’ve seen just about everything this medium has to offer.

All of which means, of course, that while this ‘zine doesn’t represent anything especially new per se, it does represent something quite different. And it kicks a lot of ass along the way to becoming and/or being — well, whatever it is. And in a very real sense, trying to define it, whether with a “proper” name or even a detailed description, rather defeats what I take to be the entire purpose of the work. Which may sound like me trying to be, as I just put it, “lazy, pretentious, or both” myself, but I assure you — it’s not. I’m not being paid enough to lie to you good people.

Look, here’s the deal : I’ve been poring over this thing for a good few nights now, and apart from figuring out that it’s got characters, and they’re on some sort of excursion or journey of discovery in some sort of over-crowded metropolis, there’s not much more about it I can really tell you without veering into the fascistic realm of informing you how you purportedly should think about this work, so I mean — why bother with that? What I will say is that Martin uses a more anarchic and intentionally ill-defined or “squiggly” line here than he does in the last one of his minis I reviewed on this site, Ultra8, and that he appears to probably have channeled most of this right from his subconscious to the page —and for this critic, at least, that almost always represents not only the most honest, but also the most exciting type of cartooning. There’s some garish colors at play on the back cover, and what looks very much to my mind like washes in some of the panels here and there, but by and large this is mainly heavy pen work with a ton of energy that incorporates some of the manga influences that I’m coming to realize are par for the course with Martin’s comics, as well as maybe a bit of a Pushwagner vibe, minus his precision. It looks great, it reads great — even if a lot of the dialogue is obliquely self-referential in that it refers to events and personages (?) that exist in a world we know nothing about — and it whisks you along for a ride from points unknown to points even more unknown, so really : what more could you ask for?

I’m tempted, at this point, to reflexively regurgitate some variation of “I don’t know art, but I know what I like,” but that’s not really the case. I rather flatter myself that I do know art, specifically comic art, and sometimes I actually have a pretty tough time deciding whether or not I well and truly like something, so — ah, shit, I don’t know where that leaves us. I really don’t. And it’s just as true to state that I don’t know where this ‘zine left me, nor do I know where it started, so hey : can I just say I liked it a lot but can’t precisely opine as to why that is? Please?

Maybe you deserve better than this review. Bryce Martin certainly does. He created something utterly “out of left field” here that’s probably not going to garner a bunch of reviews — and the one it does get is written by some third-rate clown who’s having a tricky time telling people what’s so great about it. But it is great, of that there’s no doubt, and I think the reasons as to why it is are probably going to vary from reader to reader. I know that for me, it has that profound feeling of sheer and unmediated inspiration to it throughout, and whenever you can find that in something you really should be grateful for it. To it. Whichever.

Your own mileage may — indeed, almost certainly will — vary, of course, but Martin’s crafted a righteous work of such immediacy and raw vitality here that you’re going to get some kinda mileage out of regardless. One day maybe I’ll crack its code and discover that it holds the secrets of the universe. Or maybe one day I’ll come to the conclusion that’s it’s just a zany neo-futurist runaround hastily cobbled together while it was all still fresh in its creator’s mind. Who’s to say the two are mutually exclusive?

Untitled is available for $5.00 from Austin English’s Domino Books distro at http://dominobooks.org/untitledbryce.html

2 thoughts on “What’s In A Name? Bryce Martin’s “Untitled” Mini-Comic”