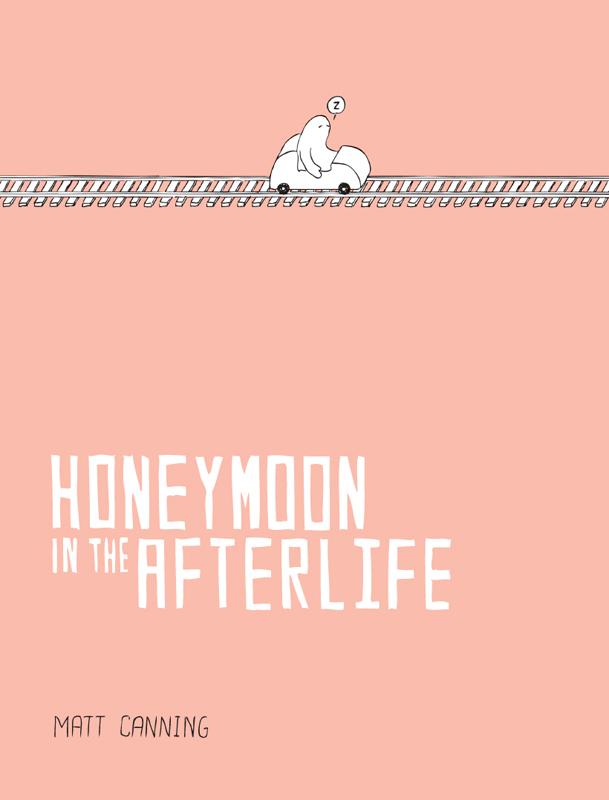 Some comics just grab you from the word “go,” and one look at British cartoonist Matt Canning’s Honeymoon In The Afterlife is all it takes for you to know that this is one of them : self-published in newspaper broadsheet format, it’s a sizable thing to behold, no doubt about that, but equally it’s an impressive one, clean and simple black and white linework accentuated by decidedly contemporary shading techniques when and where necessary, with a kind of dusty rose hue deployed as an occasional “spot” color, it’s a triumph as far as production values go. But who are we kidding? While all that is certain to capture your interest, it takes considerably more to retain it.

Which rather sounds like a segue into me cataloging a list of shortcomings, but I promise you it’s not : in fact, if anything, Canning’s ability to keep you glued to the exploits of his assemblage of the newly-deceased (all rendered as variations on the traditional ghost motif) is this comic’s standout feature even over and above its impressive physical formatting. Heck, for a bunch of dead people, they’re all surprisingly — at times even disarmingly — lifelike, but I suppose that stands to reason given that, up until the moment they died, living was all these one-time people knew.

Certainly, as the saying goes, “hijinks ensue” herein, but these are no mere dull comedic run-arounds for their own sake. With a keen eye and a deadpan sense of humor, Canning relates any number of simply-expounded-upon existential dilemmas, and he doesn’t need any language other than the purely visual — or even characters currently enjoying an actual existence — to do so. They say youth is wasted on the young, but in Canning’s afterlife we come to learn that life is wasted on the living — and that maybe, just maybe, it’s never too late to make up for lost time.

Which, for the record, is me letting you know that you should perhaps be prepared to go through some changes with this one; to experience, as the nerdy contingent calls it, “the feels” — and all kinds of feels, at that. Yes, a palpable sense of doom permeates throughout, but it’s unique in that it’s a doom that’s already happened, and Canning’s ghosts are charged with finding ways to move forward within new and utterly alien territory while still finding themselves saddled with the burdens of an all-too-human (and therefore eminently relatable) emotional spectrum. You know : love, loss, longing, loneliness, coming together, drifting apart — all that good stuff. Life may (okay, does) end, but the emotions that inform it? Apparently, not so much.

That being said, conveying all of this without aid of a single word means that you’d better be a master of the purely visual narrative, and Canning unquestionably is. There’s no cause to doubt his sequential storytelling chops for a second, in fact, so fluid is the manner in which these vignettes are not only strung together, but riff off each other and work in concert to propel things forward. The pacing here is organic, unforced, entirely intuitive — and at times almost devilishly clever. One scene gives way to the next by means of smooth and mercifully unironic transitions, and before you even know it, you’ve gone from A to B to C by dint of a flow that you can’t help but surrender to entirely. It’s all pretty goddamn marvelous, if you’ll permit me to be blunt.

When you put this comic down — which you’ll be in no hurry to do — you’ll realize there’s a marvelous trick at the heart of this entire project, and it’s once that this critic has seldom seen pulled off with such aplomb : Canning has disguised a conceptually dense, emotionally complex, philosophically weighty work as a breezy, silent, gentle wisp. Plenty of comics impress me — this one left me quietly, but surely, awestruck.

Honeymoon In The Afterlife is available for $12.00 from J.T. Yost’s Birdcage Bottom Books distro at https://birdcagebottombooks.com/collections/comic-books/products/honeymoon-in-the-afterlife

Review wrist check – Longines “Legend Diver” riding a single-pass “Chevron” strap from Crown & Buckle in a color combination I dearly wish they didn’t call “royale and harvest,” but they do.

7 thoughts on “Who Needs Vegas Or The Caribbean When You Can “Honeymoon In The Afterlife” ?”