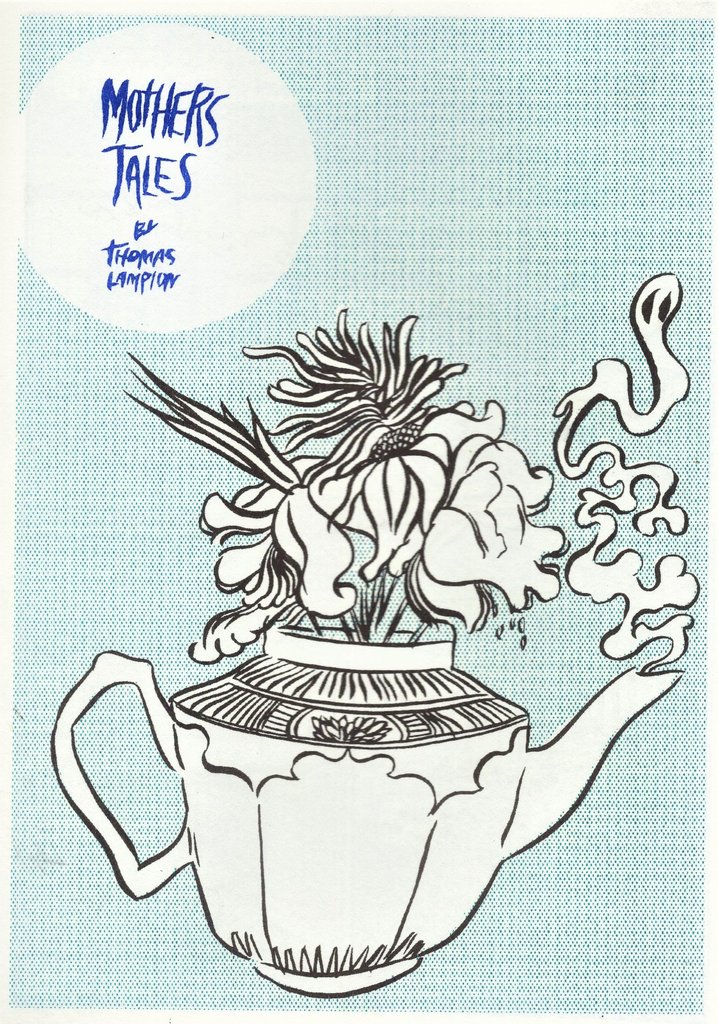 I can’t speak to whether Thomas Lampion conceived of and created his semi-recent (as in early 2020, perhaps? Or late 2019?) mini Mothers Tales ( and before you ask, I assume the lack of an apostrophe in the title is intentional) — an impressive riso-printed number, featuring a subtle array of third “spot” colors, lovingly and painstakingly produced by an outfit out of Moscow, Russia called ESH-PRINT — while he was at work on his long-form graphic novel (previously reviewed on this site) The Burning Hotels, or not, but there’s some serious serendipity going on either way. That book, after all, deals with an unplanned move home on the cartoonist’s part from Philadelphia to Appalachia (a town called Hot Springs, N.C., to be specific) and how the same things he was going through in the here and now oddly mimicked and echoed events that took place in his mother’s past, while this shorter-form work has an understandably more narrow scope, concerning itself with family shot stories handed down from generation to generation and the odd sense of comfort that comes part and parcel with them, but it’s no stretch at all to say that a similar tone is both sought after and, crucially, achieved by both.

What we may be looking at here, then, is a kind of “accidental” missing chapter of a book that came later, or perhaps even the metaphorical seed from which an equally-metaphorical tree eventually sprang, but I suppose at the end of the day all that really matters is whether or not this is a ‘zine that succeeds in doing what it sets out to do in and of itself, and on that score one needn’t worry : Lampion is nothing if not a highly purposeful cartoonist, and this is a thoughtful and considered work that succeeds entirely on its own terms.

As a modern master of digital texturing effects, Lampion’s greatest strength, in addition to his evocatively minimalist figure drawing, lies in his ability to tease out and subsequently accentuate mood and feeling via shading and patterning techniques, and it’s always remarkable to see him challenge himself on that front and come up trumps : if you’re looking for a veritable clinic on how to balance warmth and familiarity with the somber and deliberately eerie, then these 18 pages offer precisely that, awash as they are in a visual tapestry of cool greys, dense blacks, and those intuitively-placed spot colors previously mentioned, all in service of a kind of wistfully reflective homecoming that lulls both subject and reader in with time-worn tales of things going bump in the night that somehow still bump even when one knows all the beats.

Is there really, then, nothing to be afraid of? Well, yes and no — after all, regardless of whether a particular yarn is new or old, Appalachia is always alive with the spirits of the past, and so often the best things in life are both simple and inherently timeless. Lampion conveys all of that in a manner so effective that the mood, and its impact, would be powerful enough even absent the death in his family that is announced at his narrative’s outset. But I fear I may have given away too much already.

Still, it’s not like this is some mystery story or anything, and that already-oft-mentioned sense of atmosphere is so strong regardless that plot specifics become well and truly a secondary feature here — which is in no way, shape, or form a criticism. On the contrary, it’s testament to Lampion’s skills that he can take such a basic premise and weave something so involving from its well-worn cloth. This is very much a personal story, yes, but it’s one with truly universal resonance.

What we’re looking at here, then, is something that’s very rare indeed : a companion piece that absolutely and unequivocally stands on its own to feet. Whether by accident or design.

Mothers Tales is available for $7.00, with 20% of all proceeds going to the National Bail Fund, from J.T. Yost’s Birdcage Bottom Books distro at https://birdcagebottombooks.com/collections/comic-books/products/mothers-tales

Also, this review — and all others around these parts — is “brought to you” by my Patreon site, where I serve up exclusive thrice-weekly rants and ramblings on the world of comics, films, television, literature, and politics for as little as a dollar a month. Subscribing is the best way to support my continuing work, so I’d be very appreciative indeed if you’d take a moment to check it out by directing your kind attention to https://www.patreon.com/fourcolorapocalypse