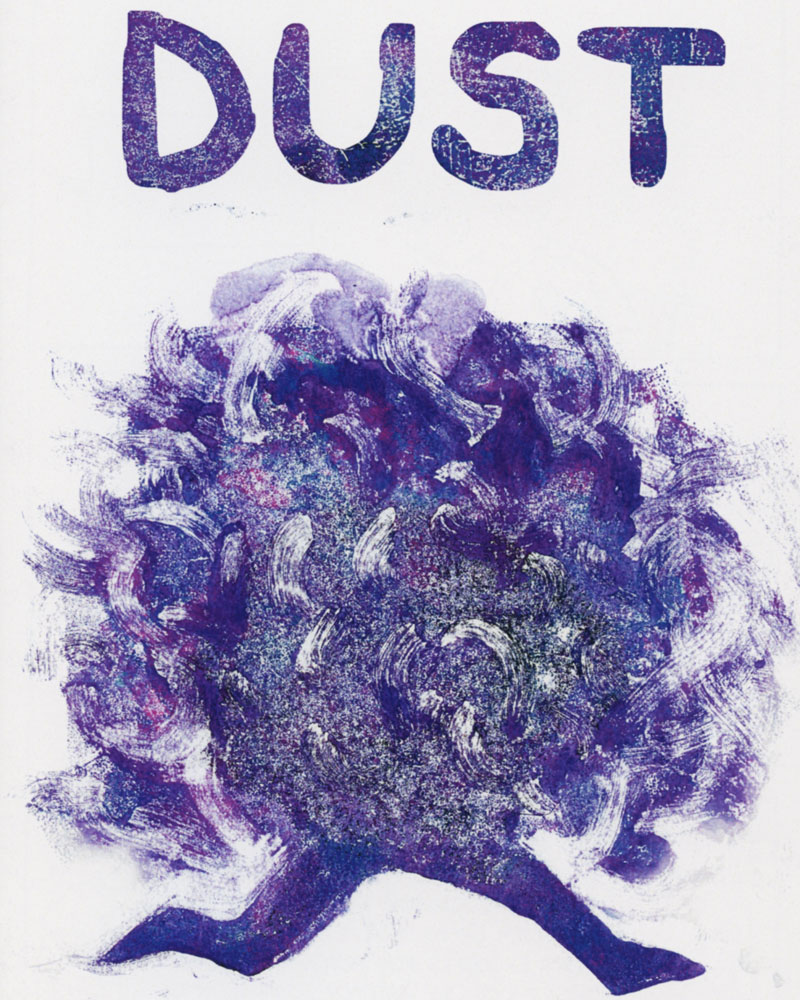 Occasionally I’ll get a comic submitted for review that’s a couple years old but still in need of more publicity than it’s received to date, and such is the case with John Carvajal’s self-published mini Dust, a precisely-crafted and insightful little number that, for whatever reason, appears to have flown beneath almost everybody’s radar. Yeah, I know, the small-press landscape is a crowded one, but trust me when I say : Carvajal’s work pretty much always stands out from the crowd, and this is no exception.

There are some sci-fi tropes and trappings on offer here — robots, for example, seem to be a ubiquitous feature in folks’ homes — but at its core this is a story about coping with loss and grieving, about how we channel our energy into strange and bizarre outlets as a form of release, only to have said outlets become obsessions — the obsession, in this case, being a recent widower’s striving to achieve the impossible : a completely dust-free home. It’s as crazy as it sounds, but also as entirely logical : I mean, people who have been married for a long time and have their spouse die do frequently find themselves with a lot of free time and no idea what to do with it.

There’s another layer to this narrative that’s equally intriguing, and frankly equally harrowing, as well, though, and that’s how this man’s adult daughter copes with watching her remaining parent losing his marbles. She’s sympathetic on the one hand, but understandably worried as can be on the other, and Carvajal manages to navigate this emotionally complex terrain with an admirably deft touch, which is precisely what material of this nature requires. There’s some gentle humor liberally interspersed throughout, too, which keeps things from becoming as morose as they may end up being in less skilled hands, but on the whole this is a comic with a very definite air of mourning about it — for both the dead and the living.

As far as the art goes, this is a noticeably more stripped-down brand of cartooning than seen in Carvajal’s other works such as Scraps and his recently-published graphic memoir Sunshine State, and the bare-bones aprooach matches the emotionally raw tone perfectly — in fact, getting “too fancy” with things would, in my view, ring both false and hollow. Solid figure drawing, expressive faces, and subtle body language are what’s called for here, and this comic delivers on all three fronts. Just as there’s not a false of extraneous line of dialogue to be found anywhere in these pages, there’s not a false or extraneous line to be found anywhere in the drawings, either. That’s a sure sign of a cartoonist both confident in their abilities and perfectly in tune with their own subject matter.

At first I had some minor quips with moments that seemed “out of character,” but the more I thought it about the more I realized that, hey, we’re talking about grieving here, and what does being “in character” even have to do with it? In fact, drifting away from the person your loved ones thought you were — and that you may have even considered yourself to be — and becoming someone almost unrecognizable is so often part and parcel of coping that consistency of characterization would run counter to how things actually are, so points again to Carvajal for “keeping it real” by showing us how unreal it can be to try and come to terms with personal tragedy. And while the purple “spot color” that occasionally makes an appearance may seem curious, its placement almost always makes a sort of intuitive sense, so — what can I say? I don’t have any real gripes to regale you with here, even when it comes to things I initially thought I might gripe about.

So, yeah — this is a very special little comic indeed, one nearly flawless in both presentation and execution, and instantly memorable upon reading. It’s a shame it didn’t garner a ton of accolades when it first came out, but seriously — better late than never, am I right?

Dust is available for $5.00 from Neil Brideau’s Radiator Comics distro at https://www.radiatorcomics.com/shop/minicomics/dust/

4 thoughts on “A View Of A Life Gathering “Dust””