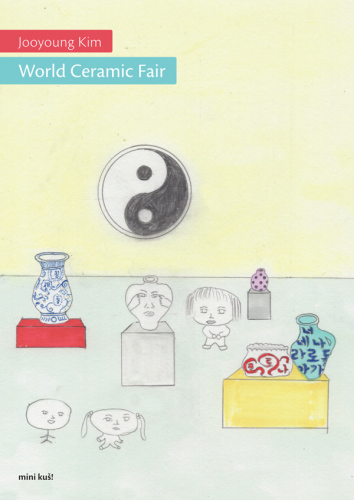 The cliche about an iron fist in a velvet glove was around long before Dan Clowes tinkered with it to come up with the title for his first long-form serial in Eightball, and it survives to this day because, hey, let’s face : there are certain situations to which it just flat-out perfectly applies. Welcome to one such situation.

Jooyoung Kim is a German-based cartoonist with a real affinity for shrouding the dark aspects of reality — as well as the darkly comic — within the most delicate, even precious, of surroundings and trappings, and in World Ceramic Fair, which is #98 in the Mini Kus! range from Latvia’s Kus! Comics, that delicacy goes beyond the pottery on display in the comic’s titular festival and extends into the artist’s own aesthetic approach. Kim incorporates (what I assume to be, at any rate) digital approximations of colored pencils, colored chalk, ink washes, and watercolor paints to fill in and flesh out the de facto “world” these deliberately minimalist — and miniature — characters inhabit, the end result being a comic that’s beautiful to look at, there’s no question about that, but also one that feels as utterly fragile as the objects (and, in some cases, people) it depicts.

Which, of course, is the whole point, so mission accomplished on that score. Kim’s inventive use of space and panel arrangement is also worthy of note and creates a singularly surreal atmosphere for this comic that plays with elements of what I take to be autobio and transposes them into a “one-step-removed” type of scenario wherein ceramics stand in for comics, but the Asian artist in question still finds herself fighting a decidedly uphill battle when it comes to getting her European audience to appreciate the statements her work in making about racism and prejudice on anything more than the most facile, superficial level. Many people even go so far as to simply flee is quasi-polite terror from her, and as for those who don’t? Well, it might actually be better if they did.

Still, as mentioned earlier, Kim tackles a serious set of issues here by almost disarmingly non-confrontational means, and I’m not sure if that’s sad, smart, or some of both. I mean, who are we fooling? People are, by nature, easier to coax than they are to actually educate, and couching a crucial and frankly righteous point within a narrative tone of gentle whimsicality performs that task quite nicely. It’s a bit depressing, though, to consider the fact that grown-ass adults still require this kind of “kid gloves” approach.

That being said, no one can accuse Kim of missing the mark here. Everything about this comic is decidedly and admirably effective. It also carries with it the weight of added urgency given the frightening uptick in anti-Asian hate crimes across North American and Europe recently. It may not feel urgent, true, but again : who am I to argue with something that works? And more importantly, who am I to judge how an Asian artist chooses to engage with, and express their own personal truth with regards to, issues of import to the community they’re a part of? And who am I to judge how they wish to communicate these things to a broad audience that no doubt includes many non-Asian readers?

So yes — this is both a good comic and an important comic, as well as being one of the strongest Mini Kus! releases to date. And as regular readers of these books are well aware, that’s really saying something.

World Ceramic Fair is available for $7.00 from the Kus! webshop at https://kushkomikss.ecrater.com/p/38343286/world-ceramic-fair-by-jooyoung

Also, this review — and all others around these parts — is “brought to you” by my Patreon site, where I serve up exclusive thrice-weekly rants and ramblings on the worlds of comics, films, television, literature and politics for as little as a dollar a month. Subscribing is the best way to support my continuing work, so I’d be very appreciative if you’d take a moment to give it a look by directing your kind attention to https://www.patreon.com/fourcolorapocalypse