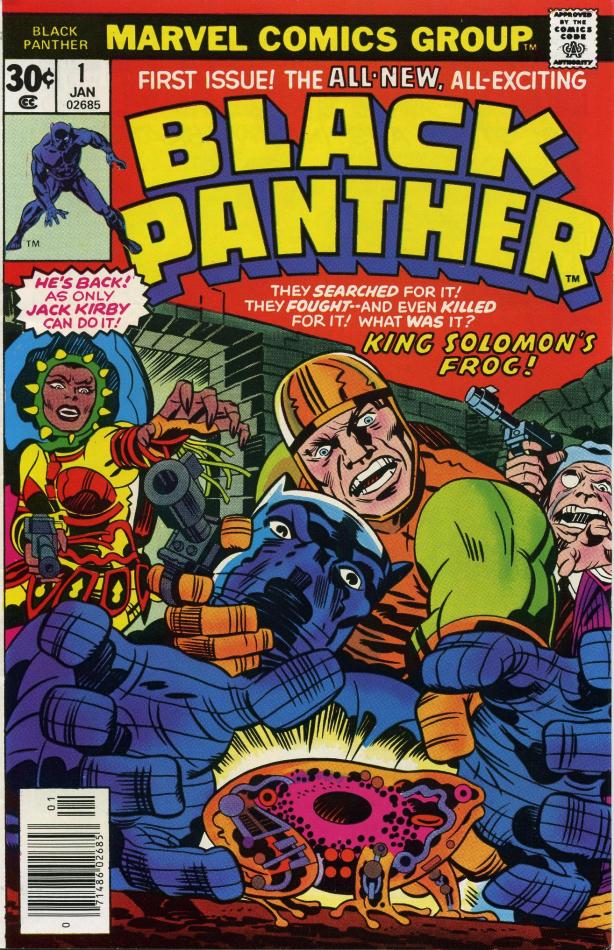 I have to admit that when I first started to haphazardly plan my week-long tribute to The King Of Comics, reviewing Black Panther #1 (cover-dated January, 1977) wasn’t on my radar screen. It’s not that it’s a bad book, mind you — anything but — just that the schedule was already looking a little full, and while I left a few makeshift “slots” open to be filled by whatever struck my fancy, I was thinking those would most likely be a good fit for more obscure entries in the Jack Kirby canon like Dingbats Of  Danger Street or Manhunter.

And yet, it has to be said — while not too many people look back at Jack’s brief run chronicling T’Challa’s exploits in the late ’70s as one of the highlights of his career, in retrospect this was exactly the right direction for Marvel to take the character in at the time. The Panther had last been giving a starring turn in the pages of Jungle Action a few years prior, where writer Don McGregor had fashioned a lengthy political thriller heavy with spiritual and psychological undertones entitled “Panther’s Rage,” and he then immediately followed that up by having T’Challa take leave from his kingdom of Wakanda in order to to confront — and be confronted by — numerous societal ills, most notably racism, right here in the good old U.S. of A. The influence of Denny O’Neil and Neal Adams’ “Hard-Travelling Heroes” storyline from the pages of Green Lantern/Green Arrow was fairly obvious, but McGregor’s prose was far more dense and purple, and his star character’s conflicts far more internalized — and paired with the sleek and stylish artwork of Billy Graham, a truly memorable run was concocted, the reverberations of which are still being felt today in titles like Ta-Nehisi Coates’ (somewhat) recently-concluded Black Panther series. Still, for all that, when it was over, a more “back-to-basics” approach was definitely in order. The Panther had been to hell and back — why not let him have some honest-to-goodness fun again?

And if there’s one thing that’s abundantly clear from the first page of this story, entitled “King Solomon’s Frog!,” onward, it’s that rip-roaring action and adventure were going to be the order of the day. Right off the bat, T’Challa and his new (and very temporary) sidekick —a guy named Mr. Little who’s a collector of rare antiquities and, well, little —- are plunged headfirst into the thick of it : on the trail of a mysterious and powerful artifact that’s said to have the power to warp and bend time itself (our titular frog) they discover the freshly-deceased body of a man named Queely, another collector and the last person unlucky enough to have the wondrous-but-apparently-cursed object in his possession. He’s been run through with a sword and his museum-like residence has been thoroughly ransacked, but the assailant —  an armored warrior hailing from time and place unknown — hasn’t gone far. And by that, I mean that he hasn’t even made it out he front door yet.

A dramatic battle (did Kirby ever do them any other way?) ensues that ends in something of a stalemate, with the torn-from-the-pages-of-the-pulps villain fleeing into the night, but no matter : T’Challa and Little, in a moment that some call curious but I would argue demonstrates both combat- veteran insight as well as a degree of compassion, allow their opponent to make good his escape, confident in the knowledge that he won’t get far looking like he does and that he’s probably every bit as scared as a cornered animal, anyway.  Besides, they’ve got the frog — for now, at any rate.

Our constantly-on-the-move duo — now ensconced aboard a futuristic techno-marvel aircraft upon which a customary bit of historical “info-dumping” takes place — are soon set upon by a wave of jetpack-wearing henchmen (hey, you know henchmen when you see them), which gives Kirby a chance to flex his artistic muscles with a spot of truly breathtaking aerial combat, but when the action returns to the ground, we learn that this particular “goon squad” is operating in  service of the regally cold-blooded Princess Zanda, who has her own plans for the frog once it falls into her grasp — which it does after Little is shot and (apparently) killed, and T’Challa’s own grip on it is loosened thanks to another burst of gunfire.

Still, things aren’t anywhere near as cut-and-dried as they seem here — not only is death in comics never a permanent state of affairs, but Zanda does T’Challa the courtesy of informing him that Little was planning on killing him once he no longer had need of his services, and even though the frog was once the property of our hero’s grandfather, odds are better than good that it would never be making its way back to Wakanda. There’s talk of an “activation code” to get the time-travel functions of the device working, but apparently a good, hard, jolt will do the job just fine, for as this issue ends, we find that a  doorway into the future has been ripped open, and a curious little being with the phrase “Hatch 22” inscribed and/or tattooed on its oddly-shaped forehead has emerged into our time, ready to raise all kinds of hell.

Black Panther#1, then, is clearly not a book that delves into any of the deeper moral and philosophical questions which Kirby explores with such insight, vigor, and humanity in many of his other works, but it is mile-a-minute thrill ride from start to finish, loaded to the gills with all the best trappings of pulp sci-fi storytelling : mysterious hidden agendas, competing interests, conflicted situational ethics, advanced-bordering-on-magical technology, even a gorgeous-but-deadly femme fatale. Kirby and inker extraordinaire Mike Royer delineate the breakneck proceedings with unmistakable energy and a heavy emphasis on the dramatic, and the end result is a feast for the eyes that won’t leave the mind feeling hungry, either. This comic is a textbook example of smartly-constructed and flawlessly-executed genre storytelling of the “high-octane” variety.

But then, who in their right mind would expect anything less? If there’s one thing Kirby never did, it was run short on creative fuel.