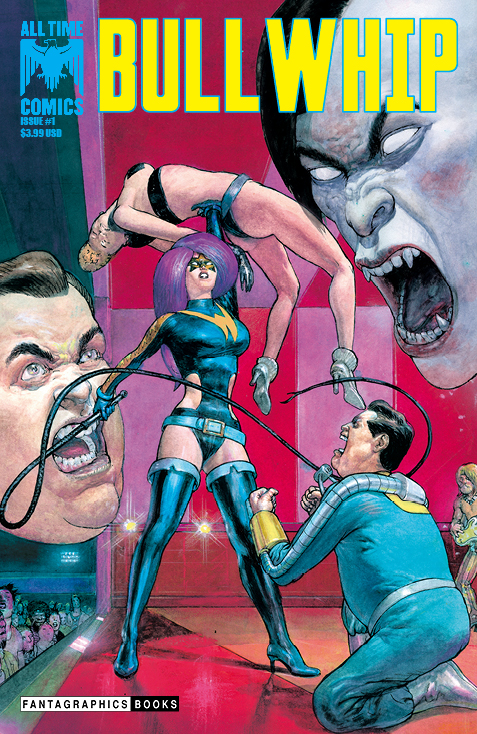 If there’s one thing “Bronze Age” comics didn’t do, it was subtlety. It was alien to their very DNA. And your ability to accept this as fact will go a long way toward determining how much you enjoy — or don’t — All-Time Comics : Bullwhip #1, the second installment in Josh and Samuel Bayer’s post-modern take on 1970s super-hero comics.

Josh Bayer’s script is a mess (as is the Das Pastoras cover, if we’re being totally honest), but I don’t necessarily mean that in the pejorative sense — at times it’s a rather delightful mess, as nominally “feminist” (but really much more of a stereotypical male-fantasy take on an equally stereotypical dominatrix figure — entirely, I would contend, by design and not accident, since flubbing every lame attempt at portraying empowered women was a staple of comics “back in the day” — and, all too often, remains one to this day) protagonist Bullwhip rips her way through one villain after another, starting with (speaking of obvious) The Misogynist, landing for the most part on The Time Vampire, and ending with the mysterious Raingod. Do try to keep up. 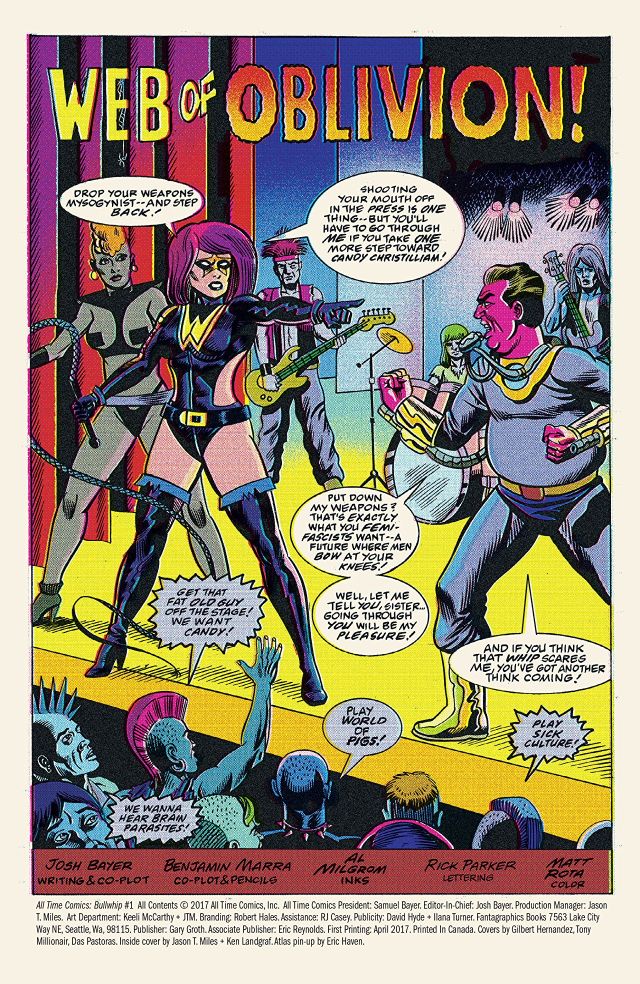 Or don’t, since it really doesn’t make that much difference. The flavor matters more than the ingredients here, and if cringe-worthy dialogue and a non-sensical series of battles (in Metro City this time out) bothers you that much, you’re in the wrong place. Penciller Benjamin Marra helped out with the plot here, and it shows : his penchant for wink-and-nod exaggeration is on full display in the storytelling, but curiously — and thankfully — toned down in the art, thanks to the always-leveling effect of Al Milgrom’s inks.

Confession time : Milgrom was probably my least favorite of all Marvel artists when I was a young reader (that would be the mid-’80s, in case you were wondering), but his presence here is a welcome one, necessarily toning down Marra’s ever-present “edgelord” sensibilities. For that alone, I’m willing to pin the MVP award for this issue front and center on Milgrom’s lapel. He may bow if he wishes to do so. 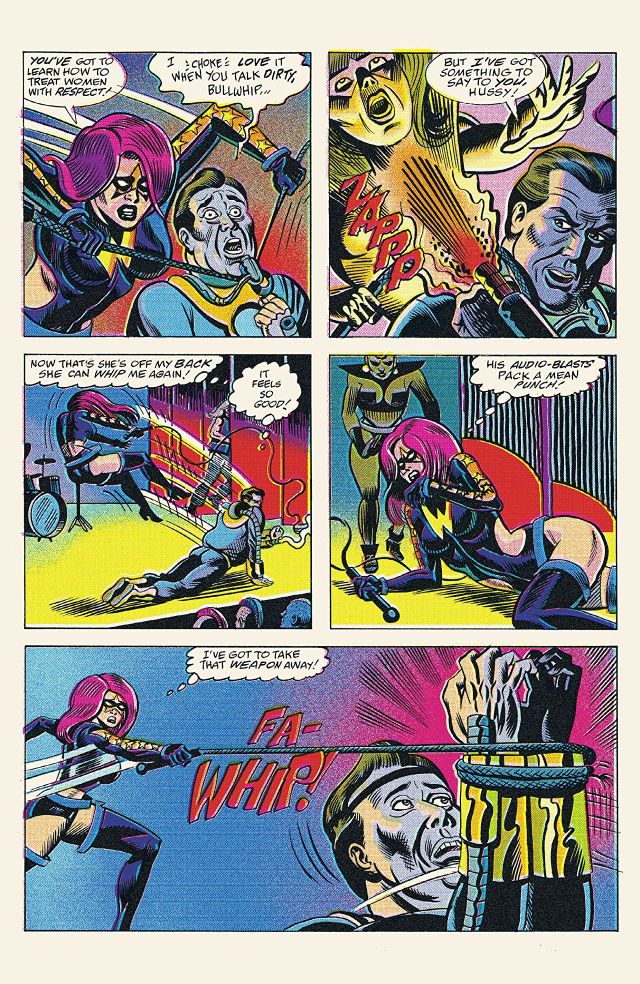 Of course, the not-even-near-miss attempt at feminism culminates in a barely-sublimated (if that) lesbian embrace, a trope as old (and as geared toward pubescent male readers) as Wonder Woman herself, but by and large the nods here are cast more in the direction of “B-list” Marvel heroines like Hellcat or Valkyrie, as the comic clumsily attempts to hide its inherent sexism under layers of bombastic dialogue and OTT action. Again, if you take this as being intentional — which to me it clearly is — you’re going to dig the whole thing a lot more.

Matt Rota’s colors are solidly “retro” here, and generally work, while Rick Parker’s letters are straight-up delightful. Their efforts help position the comic squarely within the stylistic continuum being aimed for, and are as valuable to the proceedings as the contributions of the “main” creators themselves. The end result is more of an overt nostalgia-fest than anything else this series produced (or at least has produced to date), and probably the working definition of a “your mileage may vary” comic. I understand and respect the arguments put forth by people who were offended by it, absolutely — but for my part, I don’t think it was ever trying to be a serious enough work to cause offense in the first place. 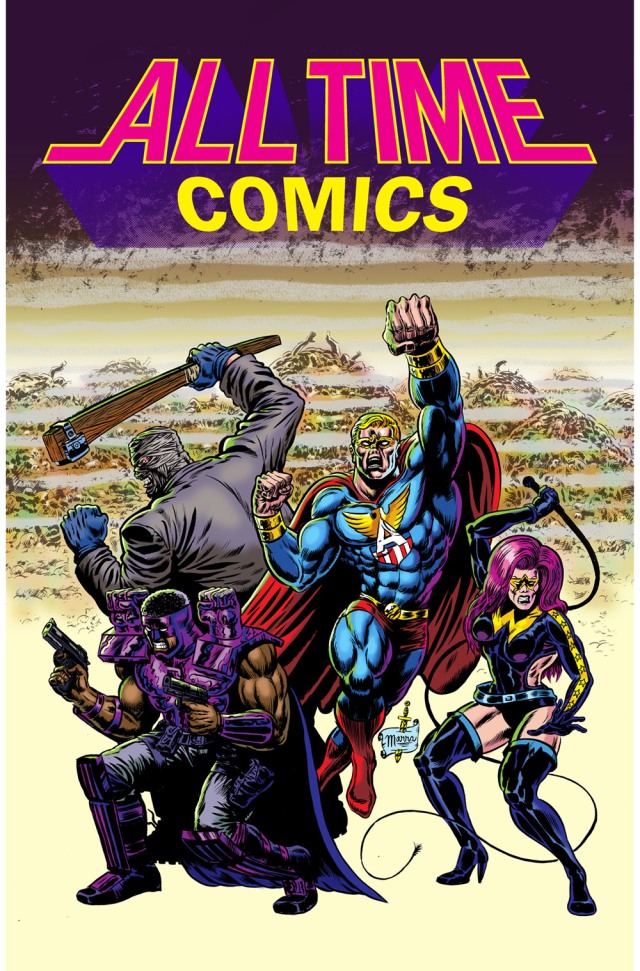 Yes, that’s me damning the comic with faint praise — but it’s also me admitting that I kinda liked it, maybe even more than it deserved to be liked.

Which, again, amounts to a pretty qualified endorsement, I freely admit.

This review, and all others around these parts, is “brought to you” by my Patreon site, where I serve up exclusive thrice-weekly rants and ramblings on the worlds of comics, films, television, literature, and politics. Lately, in fact, it’s been a lot of politics — but hey, there’s a new piece up on there that delves deeper into, and builds upon, the ATC-related themes we’re exploring here on the blog this week. You can join up for as little as a dollar a month, so seriously — what have you got to lose? Needless to say, I’d be very gratified indeed to have your support.