Andrew Buck pulls out all the stops to deliver an eyeball-melting cover for All-Time Comics : Crime Destroyer  #2, the fifth (I know, at this point things are getting a bit confusing) installment in the first “season” of Josh and Samuel Bayer’s resurrection of “Bronze Age” aesthetics through a post-modern (or, if you prefer Kim O’Connor’s designation for many of the creators involved, “Post-Dumb”) lens, and certainly the ultra-violence in depicts is thematically in line with the book’s contents — but the comic itself is relatively free of the gruesome and gory, truth be told. You should not, however, take that to mean the story isn’t kinda, well, sick.

As was the case with All-Time Comics : Atlas #1, the issues that find Benjamin Marra in the creative driver’s seat (he pencilled and inked this one, and co-wrote it with Josh Bayer) are decidedly more vicious and morally questionable than the rest, and with the villain taking on our Vietnam-vet-turned-vigilante (back in his hometown of Swan City) this time out being a Joker-esque “dandy highwayman” (apologies to Adam Ant) known as The P.S.Y.C.H.O. (Personality Symbolizing a Yawning Chasm of Oblivion, if you must know), the twisted (a)moralizing he offers in defense of his sociopathic “philosophy” is basically a green-light for Marra to indulge in a sanitized version of his Terror Assaulter : O.M.W.O.T. excesses. 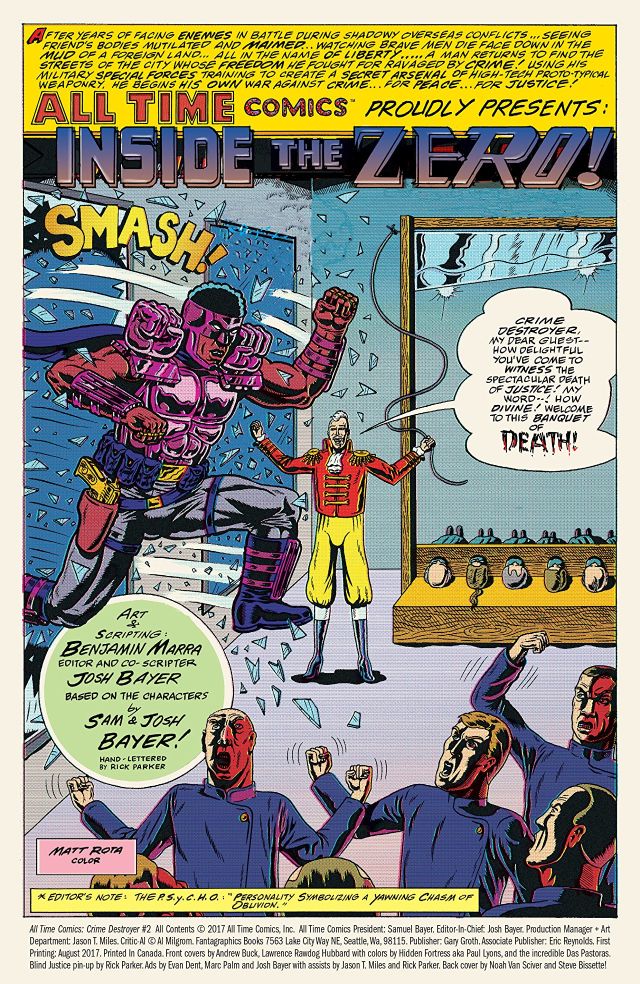 If you can stomach Marra, then, you can probably stomach this comic — and may even find it kinda tame. If you can’t, then stay away. His only other helpers here are Matt Rota on colors and Rick Parker on letters, largely charged with (successfully) stream-ling the aesthetics of this entire enterprise at their respective margins, and as such, they don’t do much to either alleviate or accentuate the distinct feeling that this is a Ben Marra comic through and through.

No claiming you don’t know what you’re letting yourself in for here, then, and the idea that this “chapter” is one (more) giant Marra “piss-take” is rather inescapable and frankly kind of undercuts the attempts that everyone else makes in previous and subsequent issues to stay just shy of “pastiche” or “spoof” territory. But in many ways this is typical of ATC on the whole — one step forward, two steps back. Sometimes, thankfully, the other way around.

But not, unfortunately, this time. The blunt-force examinations of Crime Destroyer’s own methods and motivations — you know, the old “am I really any better than the criminals I’m fighting?” stuff — is even more obvious and heavy-handed than you’d expect it to be in one of these books, the psychological ugliness of everyone involved is more alienating than it is intriguing, and the last-ditch effort to save the issue by ending things on an ultra-shocking cliffhanger (that we’re never likely to get any sort of resolution to) feels like the desperate “Hail Mary” pass that it is.

So, yeah — if you’re getting the distinct impression that this is my least favorite ATC comic, then you’re a perceptive reader, and I’m doing my job right. A failure both on its own and within the larger scope of the project itself, the second Crime Destroyer “adventure” is an empty-headed regurgitation of ideas done earlier — and far better — by far too many comics creators to count.

This review, and all others around these parts, is “brought to you” by my Patreon site, where I serve up exclusive thrice-weekly rants and ramblings on the worlds of comics, films, television, literature, and politics. Join up! Please! It only costs a dollar and there’s a ton of content up on there already, which means — great value for almost no money!