Three first issues and a seven hundredth? Yeah, this oughtta be an interesting column —

Crude #1 kicks off a new Skybound/Image six-parter from the creative team of Steve Orlando and Garry Brown revolving around a mix of family drama and Russian oil business shady dealings, with some sort of vague-at-this-point mystery thrown into the mix to — sorry — muddy the waters. Orlando has always been an up-and-down writer in my estimation, but he seems to be more “up” here, serving us a script that’s heavy on the characterization and stage-setting. This may just turn out to be yet another revenge yarn, but those are fun if they kick enough ass, and all indications are that this one’ll do just that — and Brown’s murky, expressionistic art is more than well-suited to the proceedings. At $3.99 a pop for singles this might be one to “trade-wait,” but since I’m already in, what the hell — I’ll stay in. I really dig the intrigue emanating from this comic.

Also from Image this week we have The Dead Hand #1, a modern-day spy thriller with its roots in the Cold War and — hey, is this a theme? — the Soviet Union. Kyle Higgins has cooked up an immediately-absorbing yarn here with a ton of backstory to explore in the months to come, while Stephen Mooney’s art is stylish, sleek, and reminiscent of the best pulp covers, and superstar colorist Jordie Bellaire finishes things off with a polished set of hues that give the pages a very fluid, cinematic look and feel. This one impressed me a lot and felt like four bucks wisely spent — I heartily recommend getting in on the ground floor.

I was pretty underwhelmed by Unholy Grail by the time all was said and done, it has to be said (it started off okay yet ended up just being a kind of “Cliff’s Notes Camelot” with pretty pictures) —  but apparently not so underwhelmed that I was unwilling to give The Brothers Dracul #1 , from the same creative team of writer Cullen Bunn and artist Mirko Colak, a shot. Like their previous series, this one is a mildly revisionist take on ancient legend, is published by Aftershock, and has a lush, atmospheric, “Eurocomics” look to it. Fortunately, the story seems a bit more ambitious here, with an emphasis not only on the future Count Dracula himself but also, as the title plainly states, his less-heralded (and therefore less-notorious) brother. I know, I know, I was a little worried that we would simply be getting another Dracula Untold here, too, but so far that doesn’t seem  to be the case. Things could go south in a hurry with this book — they did before — so I’m keeping it on a short leash, but what the hell? I felt like I got a damn solid read for my $3.99 with this first issue. 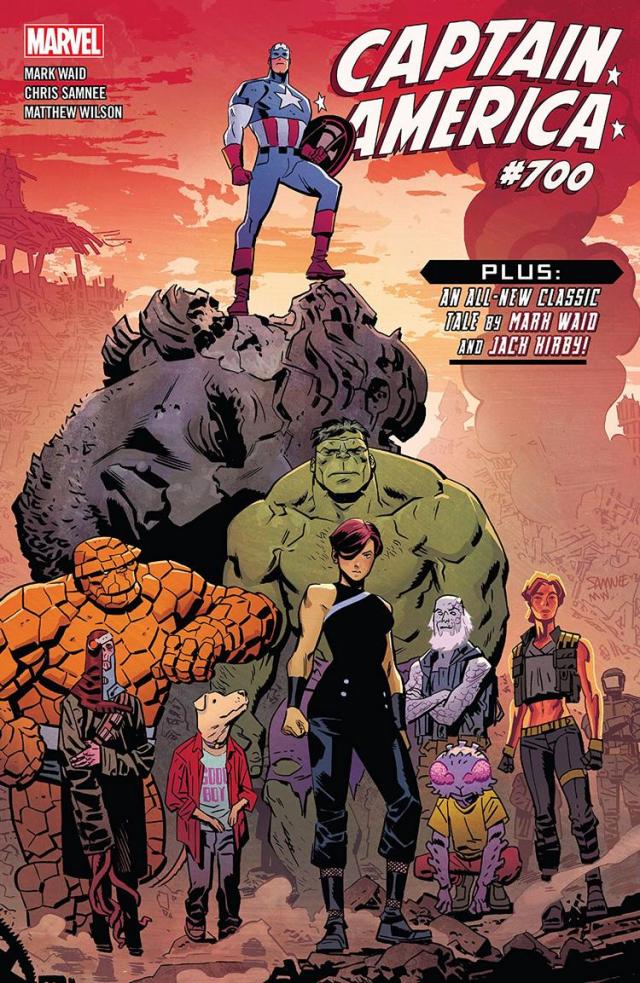 Finally, then, we come to Captain America #700, an extra-sized (and extra-priced, at $5.99) anniversary issue that also sees the conclusion to Mark Waid and Chris Samnee’s truncated “Lost in Time” pseudo-epic. I liked where this was headed — and, as always, loved the art — until the very end, when Waid takes the dull and predictable step of “retconning” the previous few issues out of existence. Cap’s back in our time like nothing ever happened — because, essentially, nothing did. And that’s kind of a shame, because what did happen (until, of course, it didn’t) was actually pretty interesting and borderline-relevant. Alas, it’s all water under the bridge now, Samnee is off to greener pastures, and I’m all out of cliches. Real quick though — the less said about the backup strip, the better. The art’s great — they dug out an old, unused Jack Kirby inventory story — but the script (and again, this is all on Waid) doesn’t match up convincingly with the visuals at all, and the modern computer coloring just bastardizes The King’s work. For a supposed “milestone” comic, this one should have been a lot better.

Okay, that’s me keeping it short and sweet for this installment, something I should probably try to do more often. I dunno what all we’ll have to talk about next week, but something tells me Action Comics #1000 will at least merit a brief examination, don’t you think? Catch you back here in seven short days!