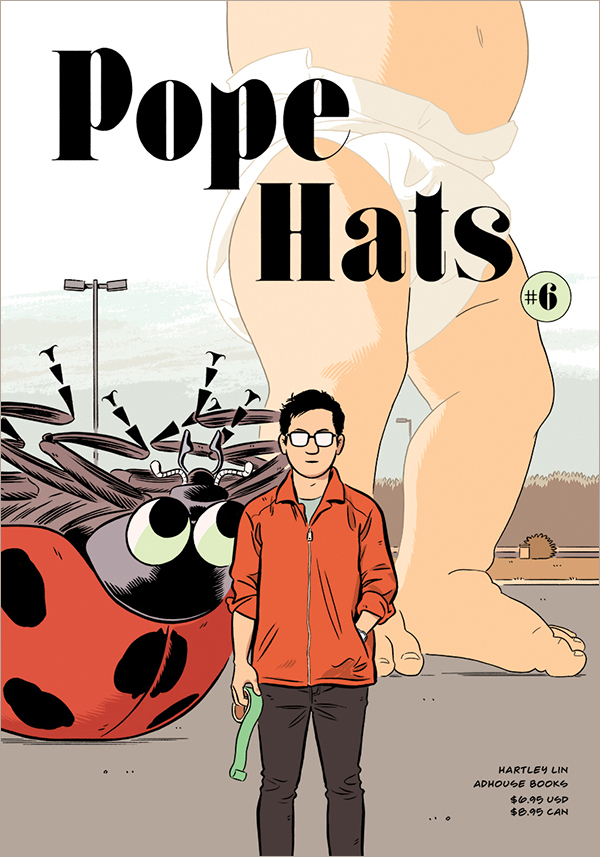 So — who do we believe? Over at TCJ, inexplicably popular critic Matt Seneca used his review of Hartley Lin’s recently-released Pope Hats #6 as a platform for anti-natalist proselytizing and to burnish his “edgelord” bone fides, while at Sequential State, my friend Alex Hoffman adorned it with glowing praise, admittedly filtered though his own parental sensibilities. Can they both be right and/or wrong?

Well — theoretically, sure. But as circumstance would have it, I find myself leaning more toward “Team Hoffman” on this one, although I don’t see the latest issue of the long-running AdHouse Books series, which carries the title of “Shapeshifter,” as a revolutionary departure for anyone but cartoonist Lin himself, who telegraphs his intentions early on by ditching his “Ethan Rilly” pseudonym and positioning himself as being smaller in stature than his infant son and a toy (?) ladybug on the comic’s cover. He’s still front and center, mind you, and so we’ve got ourselves a fairly clear case of truth in advertising going on here : this is a comic about him, sure, but he’s not the largest figure in his own life.

I can’t be the only reader (or critic) to get a “this feels like Adrian Tomine used to about 10-15 years ago” vibe off this book, but at least Lin’s less determined to force meaning and significance upon everything, choosing instead to trust his readers enough to tease such things out for themselves as these four-panels-per-page interconnected vignettes run their course. Granted, the overall thrust of the work is right out there in the open — the strategic placement of his “Driving Through Vermont” one-pagers alone sees to that — but he assiduously manages to avoid clobbering you over the head with a “life is about the small, quiet moments for me now” editorial/artistic POV that you’d frankly have to be blind to miss, anyway. In the wrong hands, this shit could grate pretty fast — but Lin’s nothing if not skilled, and so he manages to pull it all off, if only just barely. 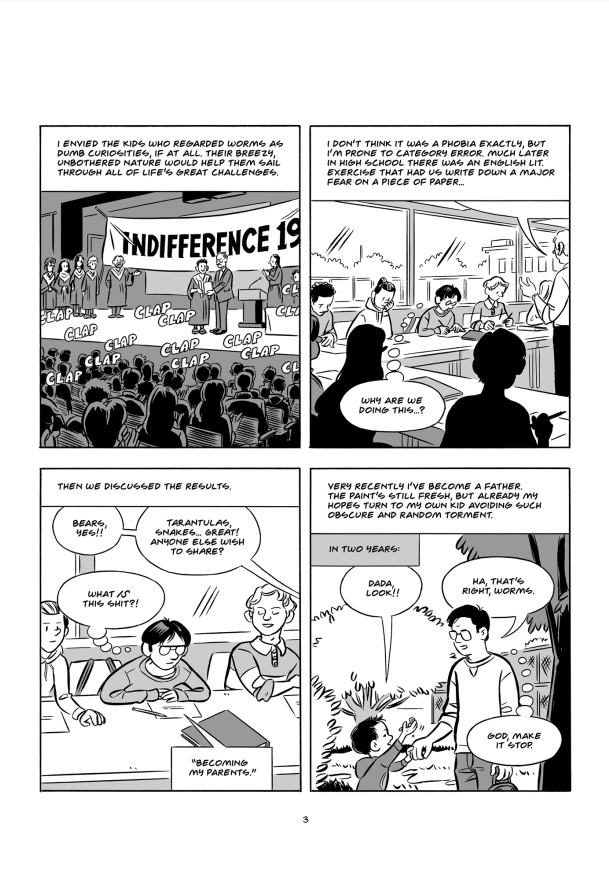 That being said, the “parental memoir” has certainly been done both before and better, and if this issue turns out to be a “sidebar piece” between the end of one long-form narrative and the beginning of another, I won’t really complain. In fact, as was the case with Pope Hats #4, this may function best as a “step out of the nest” one-off that allows Lin to get some necessary stuff out of his system before honing his focus on the next “big thing.” I won’t pull my hair out if this ends up being “the way things are” in this series from here on out — it’s not like I’ve got a whole lot left anyway — but I think I’d prefer it if, ya know, it weren’t.

Which probably sounds unduly harsh, and I don’t mean for it to. Formally, tonally, narratively, there’s nothing strictly “wrong” with this comic. I enjoyed my time spent with it. But I could also be capable of enjoying the odd episode of Seinfeld here and there while acknowledging that watching 300 (or whatever) installments of it sounds like a living hell.

Not that I mean to compare a considered and largely well-executed work such as  Pope Hats with the vacuous and wholly unremarkable Seinfeld. And not that I actually even could derive anything resembling a dictionary definition of “enjoyment” from Seinfeld in the first place. I’m probably just reaching for something that can be nearly-universally related to, I suppose. And maybe that’s what Lin is doing with Pope Hats #6, even if we’re not (thank God) all parents — in which case, he’s doing a far better job of it than I am.

This review, and all others around these parts, is “brought to you” by my Patreon site, where I serve up exclusive thrice-weekly rants and ramblings on the worlds of comics, films, television, literature, and politics for as little as a dollar a month. At that price, seriously — what have you got to lose? There’s tons of stuff up on there already, so you’re sure to get good value for your money, and your support also enables me to keep a steady supply of free content coming, both here and at my trashfilmguru movie site. Please give it a look, won’t you?