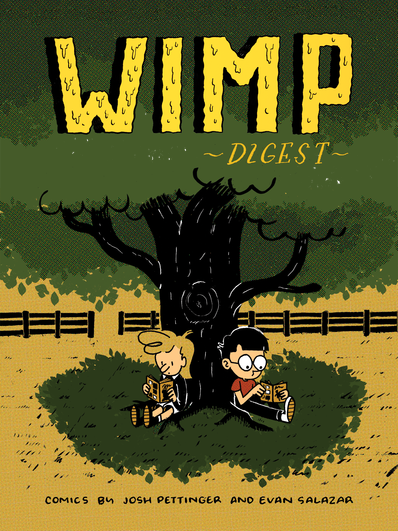 I’m sure you do, as the idea of one cartoonist telling the other a story for them to commit to paper, and the other doing the same, isn’t a terribly difficult conceit to grasp — nor is this comic itself a difficult one to kick back and spend about 15 minutes with. It’s a fun, kinda heartwarming, and certainly well-illustrated little number by two of the more promising new (-ish, at any rate) talents in the “indie”/self-publishing scene (although, as I’m sure you won’t be surprised to discover, the publication of this is every bit the “joint venture” that its creation was). Here’s the thing, though — you’re also more than likely to see some actual value in it, and by that I mean value beyond its inherent cleverness.

Not that there’s anything wrong with being clever, mind you — in this cynical day and age, it gets kind of a bad rap, but when done right it still makes for an enjoyable reading experience, which this ‘zine certainly is. But I think Pettinger and Salazar are reaching for something a little more here — something maybe, dare I say it, at least nominally approaching understanding. And not just of each other.

Rather, what I see in the essential character of these admittedly quick little vignettes — the subjects of which you can pretty well glean from the titles of the strips as presented in the image above — is an effort to understand their own artistic processes, and where the line between subjectivity and objectivity (always murky at best, true) lies by applying their own creative practices to the task of playing biographer for someone else. And who better to try something like that on than a friend, right? 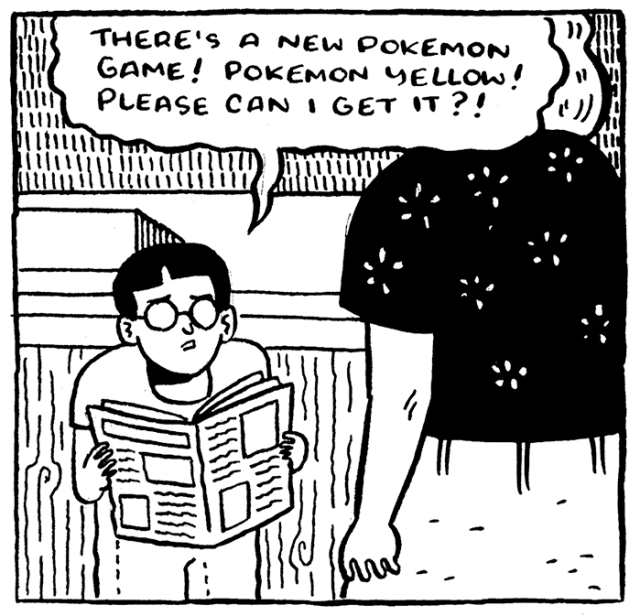 Please don’t take this to mean that we’re playing around in “where does the end of me become the start of you?” territory here or anything, though, as we’re most assuredly not. Rather, what these guys are doing is seeing what, if anything, of their own unique cartooning “voice” carries over into someone else’s story, and how that “voice” informs said story. And when you’re talking about two people whose approaches and concerns are pretty singular unto themselves, that’s likely to prove to be a very interesting exercise, indeed — and so it is.

I guess I’d be lying if I said this was anything like an essential purchase — -after all, if you want straight-no-chaser Salazar you’re better off picking up Rodeo, and if you want straight-no-chaser Pettinger you’re better off picking up Goiter (and I should state for the record that you’re doing yourself a tremendous disservice if you’re not already reading both) — but it’s definitely an intriguing and worthwhile one all the same. Plus, it’s cheap, and in times such as these that’s always a plus — but don’t take that to mean it’s inherently disposable or purely a vanity project. This might be a gimmick, sure, but it’s nevertheless a substantive one that allows each cartoonist to discover something about the other — and, more importantly, about themselves.

Wimp Digest is available for $4.00 from Austin English’s Domino Books distro at http://dominobooks.org/wimpdigest.html

Review wrist check — I was wearing my Farer Universal “Stanhope” mechanical hand-winder when I wrote this one, the only non-automatic watch in my modest little collection. It’s riding a Hirsch “Paul” alligator-pattern leather strap from their “Performance” series for a dressy look but a comfortable, sporty feel.