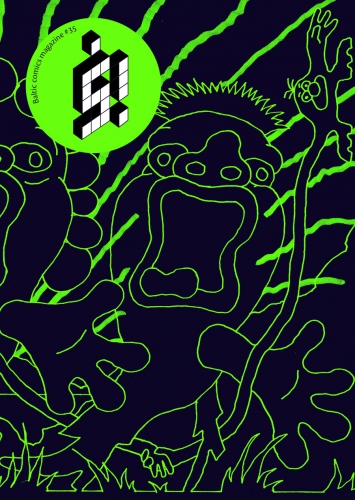 The blacklight-and-neon-green cover to Bonkers, issue #35 of S! The Baltic Comics Magazine, a product of the imagination of Norwegian cartoonist Erlend Peder Kvam — who also provides one of the anthology’s strongest strips, a sing-song number that features a trio of anthropomorphic animal/space creature hybrids going about their largely-leisurely business with a spring in their step and a shared “hive-mind” between then — announces that the tightly-focused themes that most volumes of this series tether themselves to is pretty well out the window this time out, and that in its place we have an eclectic gathering of artists from around the globe quite literally letting it all hang out. All well and good, right?

But when you crack that cover open, things by and large get even better, as the “gallery-show-in-the-palm-of-your-hand” editorial remit the title has always lived and died by turns out to lend itself very nicely to an “anything goes” assemblage of “raw feed” direct from the subconscious minds of some very interesting minds indeed. It’s tough, I suppose, to say what would fit within the extremely broad framework of a “bonkers” collection, but you’d know damn well if something didn’t — and to the credit of this edition, there are no sore-thumb standouts, but there are plenty of standouts in the more general sense of that term.

Jason Herr regales us with a finely-detailed-in-its-exaggeration journey into cosmic headspaces, Marko Maetamm channels his inner Greg Stump with a noisy debate between shadow-bathed figures of some sort that are superseded altogether by their own word balloons, Brazil’s Fabio Zimbres serves up a slice of bizarro metafiction that is ultimately about both itself and the act of its own creation, Jul Gordon’s strip is a veritable clinic on use of space on the page and the relationship between time and movement, Latvian siblings Ernests and Andrejs Klavins take us to the darkly satirical heart of a trade show whose “trade” appears to be nothing but empty corporate sloganeering, Emilie Gleason depicts a modern office run from a hot tub that has the kind of company “culture” you’d depressingly surmise such a situation would engender, and stalwarts like Theo Ellsworth, Samplerman, and Zane Zlemesa deliver precisely the sort of material you’d expect from them, which is to say something far beyond the expected. And the explicable.

So, yeah, it’s a solid line-up of talent operating on ground that is far less so. Agate Lielpetere, Anna Mlck, Beatrix Urkowitz, David Ozols, Kameeellah, and Konig Lu Q make up a respectable second tier of creators that have produced work commensurate with their talents, and Olaf Ladousse, white largely missing the mark with his experimental offering, at least keeps things interesting in both narrative and visual terms. Karlina Marta Zvirbule’s “story” is the only one that fell completely flat for me, but even there it’s not like you can’t tell that a hefty amount of work effort into it — sometimes the best intentions just lead you to some rather sorry places. 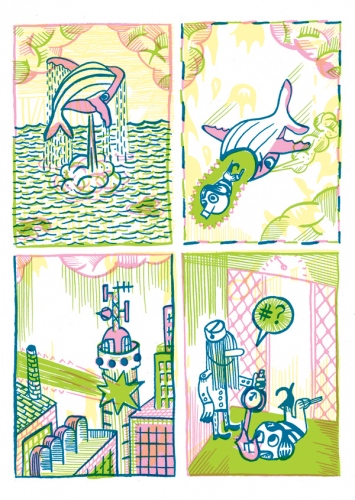 So, yeah, this one’s all over the map — but most every corner, nook, and cranny of that map is well worth checking out. And even if you get lost — and trust me when I say you will —the “running order” the strips are presented in ensures that you’ll always make it back home safely. Changed, perhaps, sure — but if a dull commitment to conservative formalisn is your bag, I think it’s fair to assume odds are good you’d never buy this collection in the first place, anyway, so your loss is no loss. 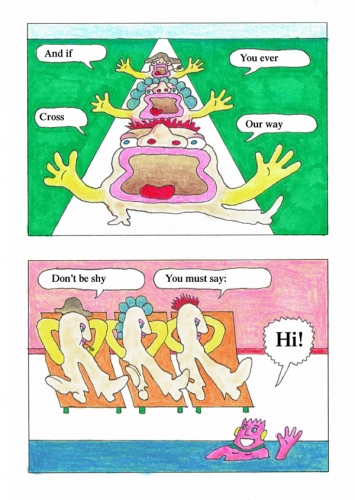 While ostensibly competing “prestige” anthologies such as Fantagraphics’ Now have largely taken readers to more valleys than peaks this year, S! just keeps on chugging along, delivering the curious goods largely under the radar. Bonkers doesn’t beg for your attention, but it grabs hold of it firmly once you take notice and never lets go.

Bonkers retails for $13.95 (worldwide shipping is free!) and is available at http://www.komikss.lv/

Also, please consider supporting my ongoing work by subscribing to my Patreon site, where I serve up exclusive thrice-weekly rants and ramblings on the worlds of comics, films, television, literature, and politics for as little as a dollar a month. The link for that is https://www.patreon.com/fourcolorapocalypse