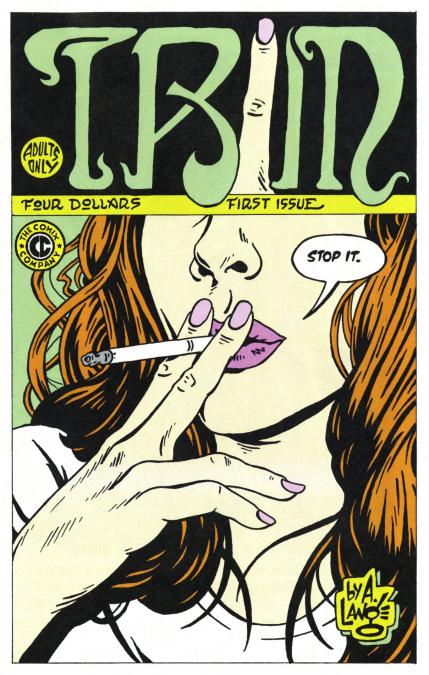 Aaron Lange has issues — five of ’em, literally, as regards his annually-issued comics anthology series Trim — and too many to count, in the figurative sense, as is plainly evident in Trim‘s pages. Consider : this is a guy who, according to a TCJ piece from a few years back, relocated to Philadelphia because his previous hometown, Cleveland, wasn’t a big enough shithole.

I’ve only spent a mercifully short amount of time in both cities and I have to say that at least Lange got that much right : Cleveland, after all, has every bit the air of a town whose best days are behind it as its (numerous) critics charge, while Philly very much feels like a place that never had any “best days,” and almost certainly never will.

Living in environs such as these is bound to inculcate a certain type of attitude among those hearty enough to withstand them, of course, but when it comes to Lange, you can double-down on the expected surliness, nihilism, garden-variety racial and sexual bigotry, and general hopelessness because he clearly lives on the social and economic margins of these already-marginal locales. It’s one thing to write and draw stories with a “gutter-level” POV; it’s another thing altogether when those gutters are overflowing with piss, shit, dirty heroin needles, and maybe even the occasional corpse.

So, yeah, abandon hope, all ye who enter here — but goddamnit, that doesn’t mean you can’t still have some fun. 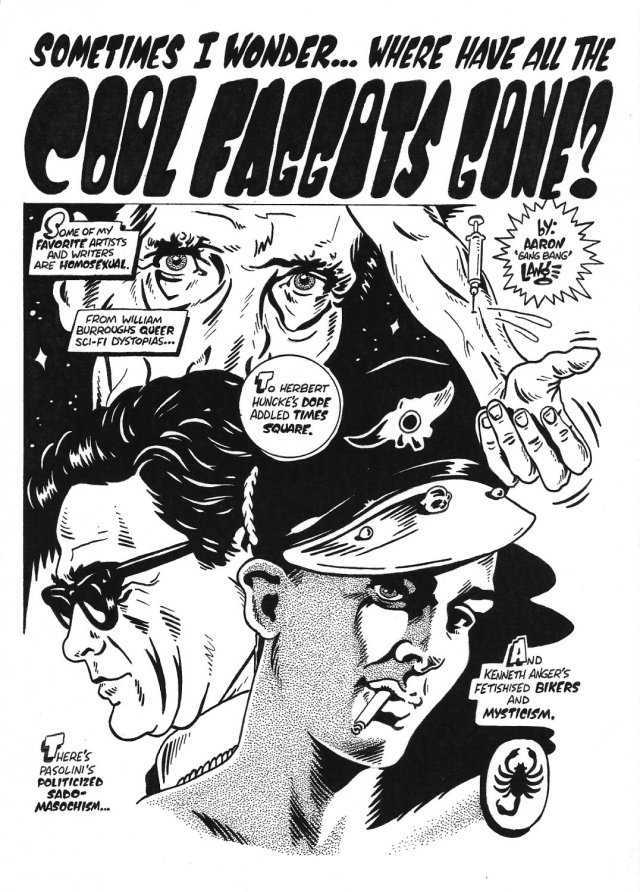 Trim is a mixed bag, to be sure, but also a consistently fascinating (not to mention uniformly well-illustrated) one : long-form autobio pieces give way to short “gag” strips give way to personal-obsession-driven portrait galleries give way to Pekar-esque “man on the street” observations give way to familial memoirs give way to sharply poignant counter-cultural histories — all delivered with wry and acerbic wit and a distinctly “politically incorrect” bent that at the very least flirts with outright misanthropy, but more often than not takes it home, rips its skirt off, and dry-humps it on the staircase. In the tradition of everyone from Crumb to Matt to Eichhorn to Altergott, Lange’s not only “unafraid” to reveal the disturbing corners of his psycho-sexual id, doing so is an essential component of his work.

Which means, of course, that it’s not for everybody. And I’m not gonna cast stones at, or reflexively dismiss as a “square,” anyone who decides these stories set in dive bars, dingy back alleys, trains headed southbound from nowhere, and AIDS-splattered “shooting galleries” aren’t for them. Fuck no — in fact, let me congratulate you on having your head screwed on straight if you want nothing to do with the seedy underbelly of life that Lange calls home. But —

If you take a pass on Trim, you’re missing out on the best (hell, only) graphic-story biography of doomed marginal punk rock loser Peter Laughner you’re ever going to find. You’ll never see a heartfelt appreciation of Ms. 45 star Zoe Lund that communicates more yearning for a star never met through the power of illustration alone than goddamn fucking Elton John could ever hope to manage over the course of 10,000 renditions of “Candle In The Wind.” You won’t get the chance to observe the admirably non-judgmental mindset of a guy who hangs out with a scumbag drug-dealer couple that’s into bestiality, automatic weapons, and Nazi-themed fetish porn. You’ll deprive yourself of the opportunity to learn about Italy’s most morbid and decadent sculpture garden.  Your life will be absent the delightfully malign influence of the guiltiest of “guilty pleasure” single-panel gags this side of Johnny Ryan.

In short, then, there’s more than a lot to love in Lange’s cheaply-produced (as it damn well should be!) ‘zine — almost all of it of the “hate yourself for loving it” variety. But there’s a fair amount to shake your head in less-than-surprised disgust at, too, as you’d probably expect if you’ve come this far : an issue two back cover strip entitled “White Male Privilege” is a pathetic excuse in minimizing, if not outright negating, the genuine discrimination others face by making the once-in-a-blue-moon hassles white dudes deal with look like major problems and would fit in just fine if Breitbart had a web comics section; women frequently come off as little more than cum receptacles in the gag strips; an uncomfortable undercurrent of homophobia permeates any and every story with gay characters; easy and obvious targets (hipsters, art school) are swung at when Lange easily can (and, frankly, should) set his sights higher. 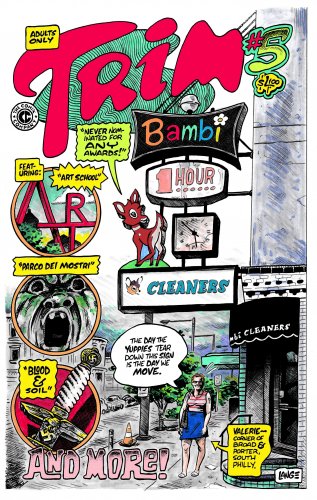 In the true underground tradition, then, you’ve gotta take the bad with the good here, and both together give you something of a comprehensive view of the artist himself. Lange obviously isn’t concerned what the fuck anyone thinks of him, and that’s a more gutsy public stance than almost any of us would be willing to take — but “warts and all” isn’t always the easiest thing to admire when the subject at hand has a lot of warts.

That might sound like a knock on Lange, but I assure you that it’s really not. Hell, if he still drank (his newfound sobriety is a recurrent theme in Trim‘s latest issue, number five) I’d absolutely love to have a beer or two (or twelve, or —) with the guy. And his amazing eye for detail, lustrous use of inks, and gift for empathetic portraiture guarantee that I’d absolutely kill too see him at work at his drawing board. Lange’s art, along with his stories, communicate a world that isn’t just “lived in,” but lived and died in. One where the survivors may not even be the lucky ones, but it doesn’t really matter because we’re all on borrowed time anyway — and where the silent, constructed-by-consensus barrier between the mundane and the heretical is easier to cross than the street when you’re fucked up on crack at six in the morning. I highly encourage a visit — but if you stay, shit, that’s on you.

Trim — and Lange’s other ‘zines — are available from https://thecomixcompany.ecrater.com

The TCJ piece referenced in the review is available at http://www.tcj.com/reviews/trim/

2 thoughts on ““Trim” Your High-Fallutin’ Standards With Aaron Lange”