Say what you will for Alex Graham — and it better be good, or you’ll answer to me — she’s nothing if not absolutely dedicated to her work.

Consider the single-minded determination with which she pursued getting her first long-form graphic novel, Angloid, recently unleashed on an undeserving world from Kilgore Books, to the point it’s at now : she serialized roughly half of the installments that make up the whole of the volume in her self-published comics ‘zine, the always-staggering Cosmic BE-ING; concurrently released the other half as a series of stand-alone comics; collected and published the entirety under her own auspices (not to mention out of her own pocket); and then got herself a “proper” publisher and re-released the whole thing complete with a snazzy photo cover of a clay sculpture she craeted just for the occasion.

Whew! Did you follow all that? Would you have the requisite amount of sheer stamina to do what she’s done? 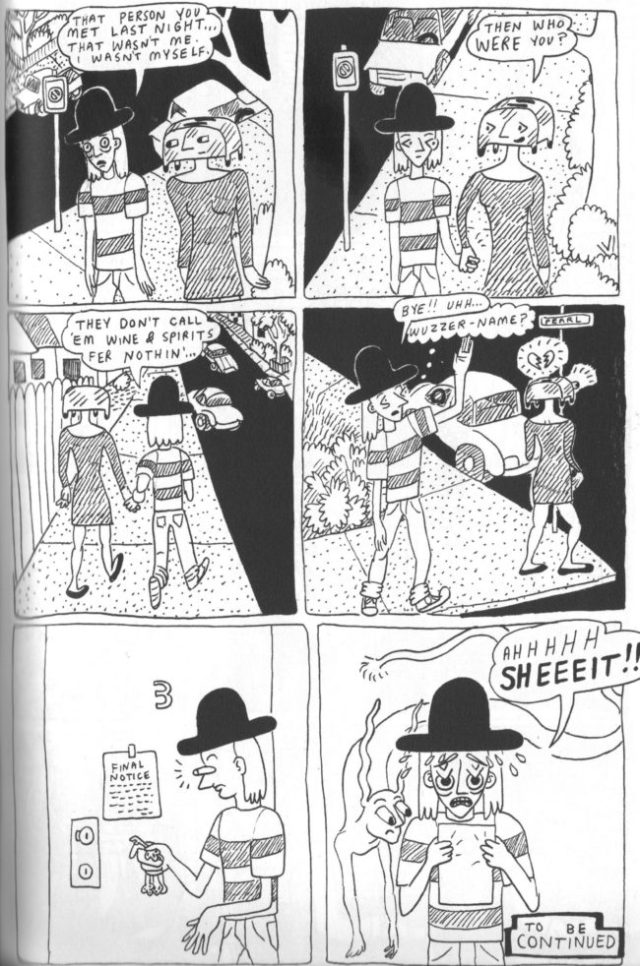 Or is it just a case of Graham having a hell of a lot of free time? If you take the protagonist of this book to be a stand-in for the artist herself, that’s actually not an unreasonable conclusion to draw — Angloid seems to lead one of those existences that those of us who date all the way back to “Generation X” were either once well-familiar with personally, or vicariously by means of our friends and/or acquaintances : intermittently employed, always broke, forever looking for something to do only to regret what it is we (or they) actually do end up doing. Lethargy is a near-constant, as is inebriation, poor decision-making, and self-loathing so extreme it borders on the suicidal. Fortunately for Angloid, she’s got some unseen allies.

Who would have though than an alcoholic, androgynous (it’s only after a couple of chapters that Angloid is decisively “tagged” as female), only sporadically-likable (but, bizarrely enough, almost always lovable — but then, I’ve always had a soft spot for folks written off as “lost causes” by the dull-witted majority) struggling artist would find herself eternally on the cusp of cosmic revelation? It’s not fair to say that she has anything so pedestrian as “guardian angels” looking over her shoulder, mind you, but she does have vaguely “New-Agey,” less-vaguely alien (or perhaps that should be inter-dimensional) companions that observe her constantly, and intercede at critical junctures — usually when the prospect of self-harm is close at hand.

By and large Angloid is blissfully unaware of the presence of these omniscient “Cosmic BE-INGs,” but when it counts, when it matters — she feels something. She knows something. Her awareness expands, or at least shifts, and even though Graham’s loose, unforced linework never really changes to signify this “other” breaking through into “reality” — melodrama being almost entirely absent from these proceedings, both narratively and visually, with matter-of-factness being privileged above all else no matter how surreal events become — when the story dictates that things need to become different, they do, even if the “language” of the cartooning remains entirely consistent.

Besides, it’s not like any number of encounters with the unknown are going to disrupt the deadpan “flow” of Angloid’s day-to-day existence : she’s still dependent on a scatterbrained gallery owner to try and sell her work; she still needs to get that cafe job; she still longs for companionship (be it in the form of older men at the bar, the stereotypical boy in a band, or even a toaster-headed woman — don’t ask, just read it!), if only to relieve the tedium of an existence seemingly forever-spent circling the drain. Yeah, the tone Graham adopts can often veer toward the bleak — but it’s never dull, never without its moments of keen observational wit, and never too far removed from the prospect of complete metaphysical transformation. It’s that juxtaposition of the mundane with the anything-but that makes this is a dizzyingly unpredictable and (get this) wholly original read from first page to last, and gives even the most seemingly-predictable scenarios a delectable frisson of the wholly exotic.

Of course, one can view this book as being as “meta” as one wishes, and the absolute authenticity with which Graham strings together her vignettes about the — say it with me now — “artist’s life” really do make me wonder whether or not she carries that straight-forward authorial view into all things depicted on these gloriously fluid, expressive pages, specifically : I’d love to know whether or not she believes her own life is observed, even influenced, by “Cosmic Be-INGs” of her own. Certainly a worldview (or maybe that should be a “cosmos-view”) this wonderfully unconventional, communicated (or, if you prefer, “channeled”) with this much naturalistic veracity, must come from somewhere — as must talent this singular. In short, if Alex Graham isn’t in touch with forces beyond our limited human understanding, and if those forces aren’t imparting her with some form of higher-dimensional artistic inspiration, shit — she sure could have fooled me.

3 thoughts on “Alex Graham’s “Angloid” : Portrait Of The Artist As A Young Wallflower”