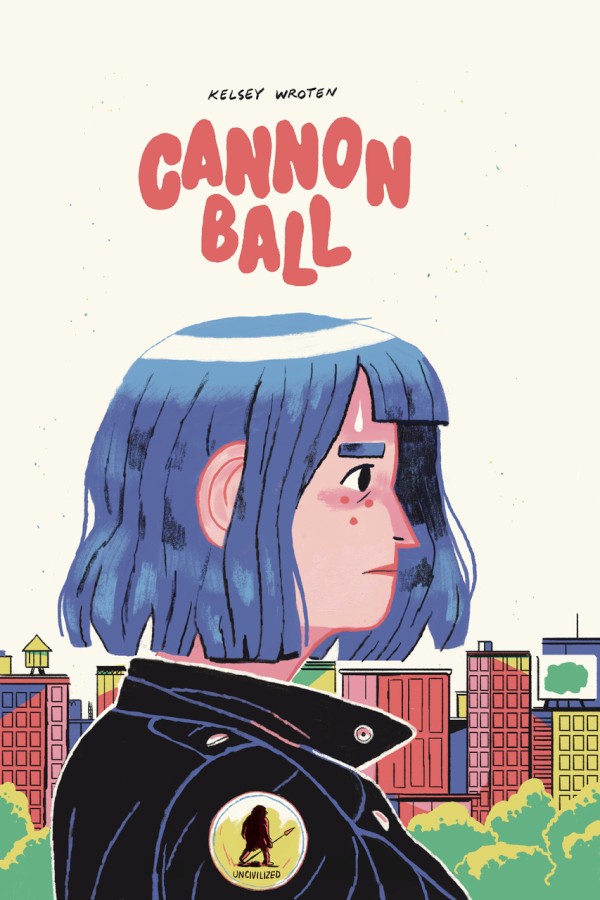 Yup, we’ve seen it before : the college/art school, or the post-college/post-art school, memoir has been a ubiquitous fixture of the “alternative” comics scene for three decades or so — more than enough time, in fact, for people who grew up reading these sorts of things to have kids of their own who now, in turn, have their own “twentysomething” stories to tell.

So, sure, Kelsey Wroten’s new hardcover graphic novel from Uncivilized Books, Cannonball, makes me feel ancient. And the publishers’ promo blurb describing it “Art School Confidential for the Tumblr generation” makes me feel even older than that. But is this really another memoir about an aimless young adult? 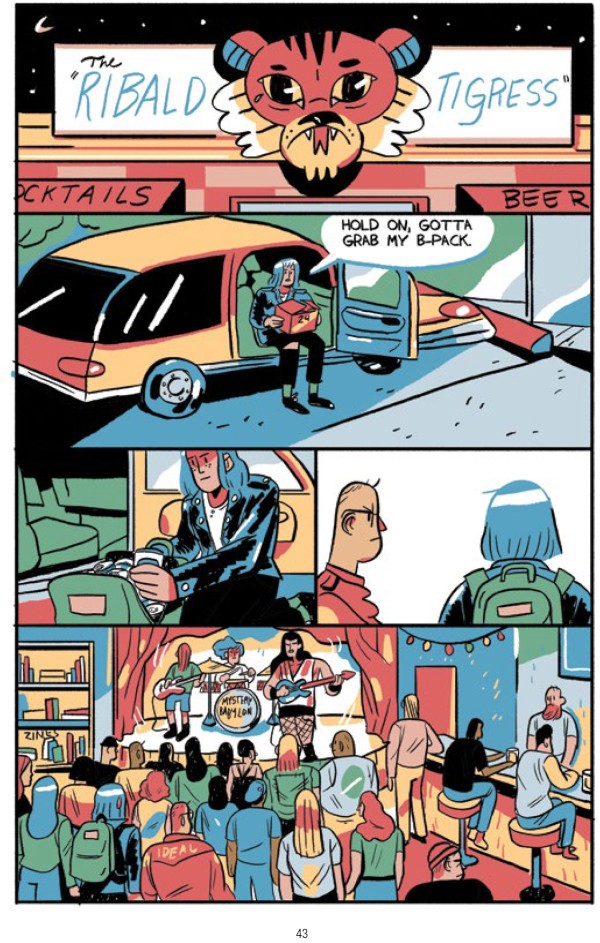 I truly don’t know. Wroten — who illustrates the proceedings in an agreeably modern updating of “classic cartooning” style and employs a very pleasing dulled-pastels color scheme throughout — more than likely places a lot of herself in protagonist Caroline Bertram, but just how much is a very open question indeed. One that I’ve puzzled over a lot, truth be told, perhaps even too much. Not that it really matters. Which is, I guess, something I should have realized a lot sooner had I wanted to save myself a bunch of completely unnecessary hassle.

Caroline is a recent art school grad who is many things — alcoholic, queer, aspiring author — but primarily she’s the kind of insufferable-yet-somehow-charming “artistic purist” we’ve probably all known. Wroten clearly has, too, of course — but I’m thinking she knows this sort of person from the inside out. 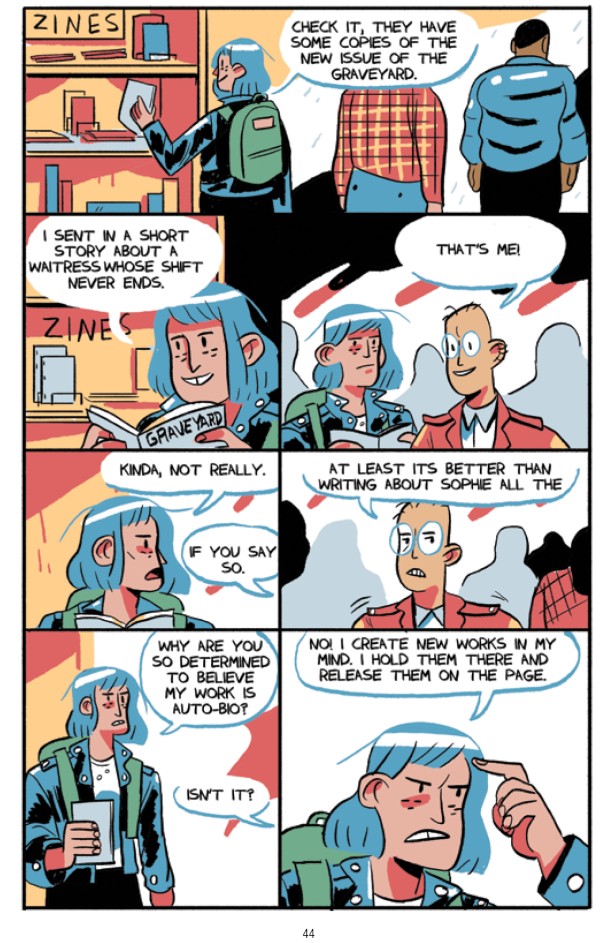 The “tortured genius” affectations and drop-of-a-hat soliloquies/rants on the inviolable nature of one’s own artistic vision are simply too spot-on to be anything but lived experience, as is Caroline’s warts-and-all portrayal in general. “Fake it ’till you make it” is usually solid advice in my book, but damn — there doesn’t seem to be an ounce of “faking it” going on in this comic. If Kelsey Wroten isn’t this person, then I’d be willing to bet just about anything that she was in the not-too-distant past.

Which means, of course, that there is an air of authenticity to this entire book that even more un-disguised works of autobio and memoir, ironically, simply fail to achieve. Big events happen in Caroline’s life, big revelations dawn upon and/or are visited to her, but they happen as they do in real life : entirely in stride, often going unrecognized until later. I can’t say if it’s “all true,” granted — but it all rings true, and isn’t of greater import in the overall scheme of things? 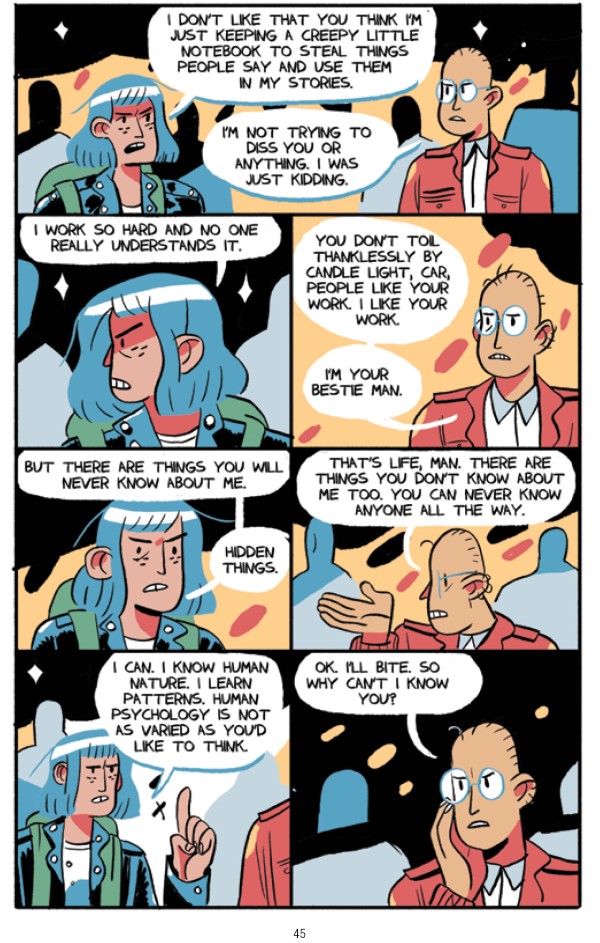 I’ll be the first to admit than just about any and every “young adult finding their footing in the world while trying to remain true to themselves” narrative is, by definition, an inherently “your mileage may vary” exercise at this point, but if the genre itself is still capable of gassing up your tank, seriously — this particular vehicle is going to take you a long way.

I’d like to see Wroten try her hand at some other type of things in the future, absolutely — I can’t imagine what she left unsaid in this book that would warrant a re-visit to thinly-veiled memoir, although I’m not opposed to being pleasantly surprised — but she’s done something remarkable with Cannonball, her very first long-form work : managed to single-handedly breathe new life into one of the most “been there, done that” types of comics under the sun and convinced even this jaded critic that what I had thought was an old warhorse may still, in fact, be a galloping stallion.

This review, and all others around these parts, is “brought to you” by my Patreon page, where I serve up exclusive thrice-weekly rants and ramblings on the worlds of comics, films, television, literature, and politics. Lately, in fact, it’s been a lot of politics. I recently lowered the minimum tier price to a dollar a month, and given that there’s a ton of stuff up on there already, trust me when I say you’re guaranteed to get great value for your money. It goes without saying — but I’ll say it anyway — that I’d be very grateful to have your support, so please do take a moment to check it out and consider joining up.

2 thoughts on “Faster Than A “Cannonball””