I’m not sure that the name of Matt Furie is separable from that of his most (in?)famous creation, Pepe the Frog, at this point, but there’s no harm in attempting to declare your independence, right? To that end, we have something of a Furie “rehab tour” going on, not that he’s responsible for the alt-right/MAGA crowd’s usurpation of his character for their usual diabolical purposes. Step one is separating oneself as clearly as possible from the fracas, which is being achieved by means of the new documentary film Feels Good Man, and step two is to just, ya know, create some new work — and if there’s one thing Fantagraphics’ forthcoming hardback collection of Furie’s (mainly) painted art, Mindviscosity, proves, it’s that he’s been working his ass off.

Having publicly “killed” Pepe off in a comic strip, he’s turned his attention to painting more fully, and while none of the selections presented herein are given titles or dates, the publisher’s blurb states that they were all created post-Pepe furor, although it may be worth noting that he does make a couple of appearances herein. By and large, though, this is art that shows Furie having emerged from the other side of controversy born of misappropriation, and taking stock not only of where he is, but maybe where many of us are, culturally speaking. Or at least some of us, at any rate. 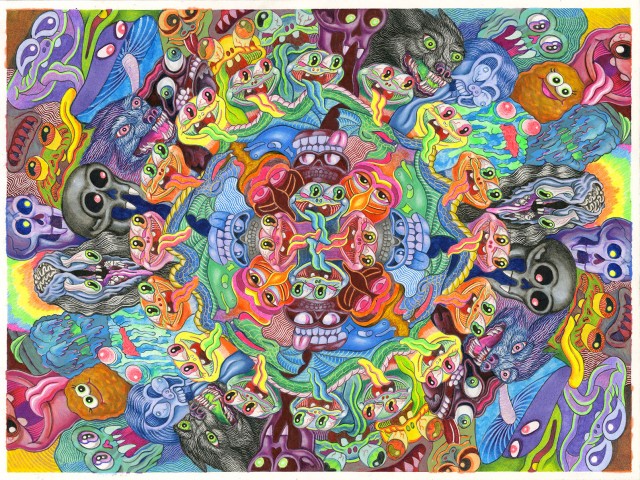 Look, I’m not gonna kid you — by and large most of Furie’s characters still fall somewhere broadly within the “dudebro”/pothead continuum, and altered states of mind are a running theme here, but his approach seems tinged with a dash of the contemplative even if the default setting for many of these paintings is full-on sensory overload. This doesn’t mean every page demands to be taken seriously, mind you, but it does show that Furie himself was serious — even deliberate — in his approach to making them, and that should certainly should go some way toward mitigating another round of unintended consequences in future.

As for the quality of said work, it’s gotta be said that Furie paints like a man possessed : hallucinatory kaleidoscopic imagery, crowds of often indefinable creatures, and biological curiosities in something approximating “everyday” situations cascading against the banks of your in-no-way-prepared mind for page after page, all rendered in such insanely intricate detail and with such an expansive — hell, explosive — color palette that you really do have to wonder what combination of nitro-charged caffeine and hallucinogenics Furie is on when he puts brush to canvas. Some are so intensely jam-packed, in fact, that their presentation in whole is followed by several pages of section-by-section enlargements — and you’ll be glad for that, trust me, even if it raises the question of whether or not a book is the best place for showcasing some of this stuff.

More often than not, I’d say it is — the dimensions of this publication are approximately “right on” most of the time, and the idea of having several pages of gatefold-style reproductions simply and obviously wouldn’t be terribly practical, so points to Fanta for doing the best job possible with a task that isn’t always physically feasible. Furie’s art is given the eye-catching presentation it deserves, and on those occasions where it is proves to be too much for the page to handle, they break it down into more palpable chunks so you don’t miss a thing.

Some of those things you won’t be missing, though, are more the stuff of nightmares than dreams, which is rather an exciting departure from the lighthearted-freakshow tone of prior Furie creations, and channeling his inner Joe Coleman every bit as mush as his inner Jim Henson results in a collection that is, at the end of the day, universally imaginative and arresting. It leaves you feeling amused at times, horrified at others, and flat-out flabbergasted most of all. I may not understand what I’m seeing all the time, or where it’s coming from, but I like what it’s making me consider every bit as much as I’m impressed by how it looks.

Review wrist check – I guess I must be hooked on this one right now, because this is my fourth day in a row wearing my Ocean Crawler “Paladino WaveMaker,” green dial model, riding Ocean Crawler’s black stingray leather strap.

Also, this review — and all others around these parts — is “brought to you” by my Patreon site, where I serve up exclusive thrice-weekly rants and ramblings on the worlds of comics, films, television, literature, and politics for as little as a dollar a month. Subscribing is the best way to support my continuing work, so I’d be very appreciative if you’d take a moment to check it out by directing your kind attention to https://www.patreon.com/fourcolorapocalypse