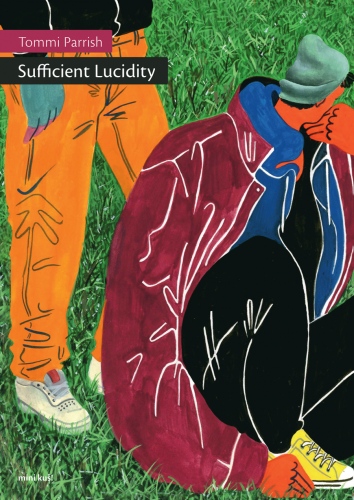 I assure you, it’s not a contractual obligation — my decision to cover everything that comes out as part of the long-running Mini Kus! series from Latvian art comics publisher Kus! is entirely voluntary. In fact, not to step too far “out of chracter,” but each new foursome of releases is one of the “events” in the comics world that I look forward to most — as a critic, yes, but even more importantly as a reader. I never know what I’ll find between the covers of one of these minis, but I always know it will be something challenging, something unexpected, and something that not only stands up to, but frankly demands multiple close and considered readings.

Their latest “round,” so to speak, exemplifies this standard perhaps more than any other — seriously, there’s not a misfire in the bunch — so if you’ll permit me (and you will, since I run this joint), the next few days around these parts will be devoted to giving each of these new Mini Kus! books a look, beginning with #91, Tommi Parrish’s Sufficient Lucidity.

No cartoonist working today does interpersonal drama as authentically as Parrish, and while we’re anxiously awaiting their follow-up to The Lie And How We Told It, I have to say this short story packs as big an emotional wallop as that long-form graphic novel did, albeit a less subtle one — and that’s not only fine, it’s great, because this is the tale of a combustible individual coming down from a combustible situation and coming to terms with the fact that their own actions have led them to the spot they find themselves in today, to wit : essentially friendless and alone. It’s also a story about balancing forgiveness with the need for emotional self-care. So, yeah, there’s a lot packed into these 28 pages.

That last statement is, I confess, incomplete, because I really do need to say that these are 28 gorgeously-illustrated pages, Parrish’s trademark blending of relatively simple expressionistic linework with extremely lush and complex colors never seeming more confident or assured than it does in this story. Sure, the dialogue is raw, honest, emotive, but most of “the feels” come from the art here, and that’s never more true than on the last page, where the weight of an ending is silently communicated with such force that you really do need to sit there and take it all in for a good little while before either putting the book away for a bit, or flipping back to the start and reading all over again. I did the latter — and then I did it again.

Parrish splits their narrative between two distinct scenes here, the first being protagonist Andy breaking into their former apartment in an attempt to get their cat back after what I took to be a break-up — although the parameters (if any) of the relationship in question are open to interpretation : Andy’s former lover Emma may have found someone new, all three of them may have previously had a polyamorous thing going, or they may have all merely been friends and roommates. The particulars aren’t especially important, but Andy’s B&E (well, okay, really it’s just an “E,” as the window is open) certainly is, as it precipitates a major life change — and probably a necessary one. When next we see Andy, they (one or more of the characters herein are non-binary, and the extent to which this is simply taken as a given and Parrish doesn’t feel the need to address it beyond pronoun usage is both confident and refreshing) have decamped for a new, presumably sober, existence in the sticks, and when Emma pays a visit to check in and receive some long-overdue apologies, it soon becomes clear that what each hopes to get from this meeting is something entirely different. I’ll say no more, apart from confessing that I fear even that short summation may be me saying too much.

Which means, of course, that there is much about this comic best discovered on your own, not least of which will be your personal reaction to it. I made reference to the last page, and it really is one of the most powerful images in comics this year — but I’d expect no less given that this is one of the most impactful, and beautifully-illustrated, comics on the year in general.

Sufficient Lucidity is available for $7.00 from the Kus! webshop at https://kushkomikss.ecrater.com/p/37507461/sufficient-lucidity-by-tommi-parrish