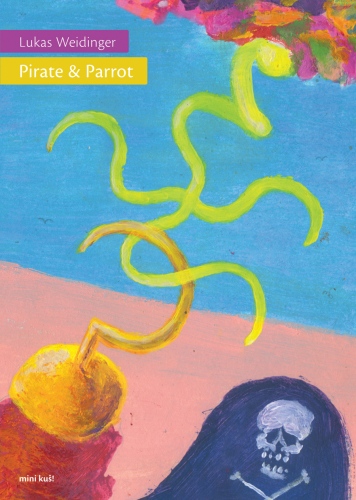 I’m always hesitant to quote verbatim from a publisher’s promotional copy, but the tag line used by Kus! to describe cartoonist Lukas Weidinger’s Pirate & Parrot, #93 in their Mini Kus! series, is short, sweet, and to the point — as well as being eminently worth responding to. It simply states : “The pirate stands for desire. The parrot stands for opportunity. The fish stands for freedom. What do you stand for?” Very clever. Very cool. And utter hogwash, even if every word of it is true — which it probably is.

Look, I love a good existential brain-buster as much as anyone, but if you’re pondering over symbolism and deep philosophical meaning, you’re missing out on the point of Weidinger’s comic, which is simply this : it’s fun. Not only is there nothing wrong with that, in today’s cluttered comics world, I would even go so far as to argue that a comic that just wants to be fun — and succeeds at being that — is worth more than yet another artistic dissertation on the intractable realities of human existence. Like I said, existential dilemmas are great — but are you always in the mood for one?

I know that I’m not, and if you feel like you could use a break from them yourself, this mini is a great place to come to find relief. Sure, the delicate and frankly lush cover would lead most reasonable people to believe that what we’re in for this one is a subtle and emotive work, but once you flip it open and find an explosion of bright pastels, exaggerated figure drawing, and cornball character designs, you really should be able to get the message that kicking back and enjoying a few laughs is the order of the day here. You can over-think Weidinger’s comic if you wish, sure, but honestly — I wouldn’t recommend it.

For one thing, the fish has more to do with the proceedings than the pirate, who disappears early on and only pops back up at the end — after receiving something of a, shall we say, comeuppance — and he doesn’t even earn a spot in the comic’s title, so if you’re the kind of person who clings to things a bit too tightly (rationality included), you’re going to find yourself flummoxed right out of the gate, and it’ll likely only get worse for you from there. You needn’t completely let go of your standards, please don’t think I’m suggesting that — Weidinger’s cartooning is utterly and weirdly captivating, the pacing of his narrative is solid, his old-school comedic timing more or less impeccable — but you would do well to let go of your preconceptions and your pretense, that’s for sure, because there’s no room for either herein. And thank goodness for that.

I have no doubt that the “rush job” aesthetics of this book are completely deliberate — come on, I’m not naive (or so I think, at any rate) — but just because they’re calculated doesn’t mean they’re not entirely sincere. Weidinger wanted to create a short-form slapstick work, found the best style with which to do so, and proceeded accordingly. As a result, this comic isn’t merely something that “works for what it is,” it works in a general sense : its creator had specific goals in mind, and not only met, but exceeded them — and the largest of those goals was to make something that would have you laughing your ass off without insulting your intelligence. Mission accomplished as far as that all goes, and with aplomb, to boot.

Still, there is that lingering sense that maybe I did miss something here. That in my rush to enjoy something absolutely enjoyable I failed to notice a deep and resonant point that is cleverly hidden in plain sight. But you know what? I could care less. I had a blast with this comic, and if it’s incumbent upon me as a critic to offer a more considered and nuanced view than that, then I’m in the wrong racket.

Pirate & Parrot is available for $7.00 from the Kus! webshop at https://kushkomikss.ecrater.com/p/37507503/pirate-parrot-by-lukas-weidinger

Also, this review — and all others around these parts — is “brought to you” by my Patreon site, where I serve up exclusive thrice-weekly rants and ramblings on the worlds of comics, films, television, literature, and politics for as little as a dollar a month. Subscribing is the best way to support my continuing work, so I’d be very appreciative if you’d take a moment to check it out by directing your kind attention to https://www.patreon.com/fourcolorapocalypse