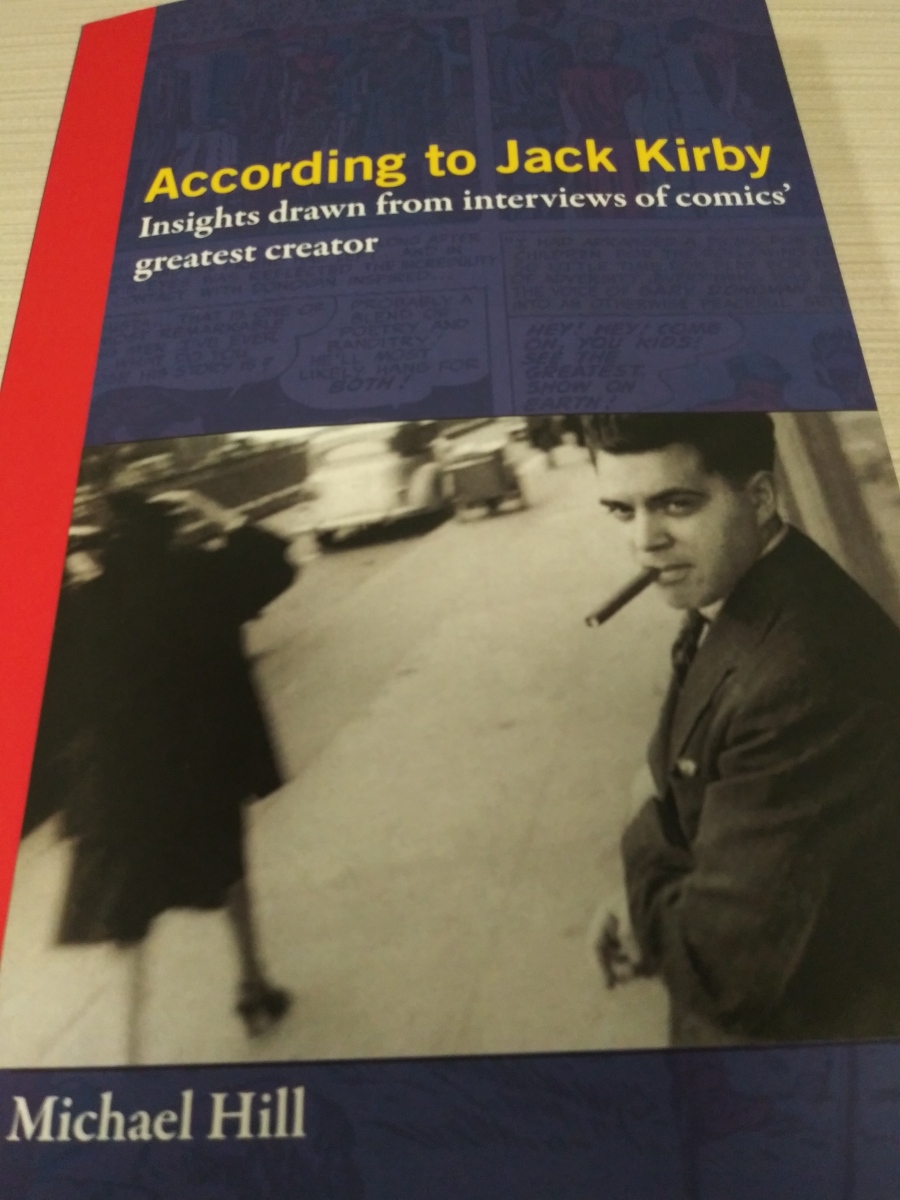 I’ll be the first to admit that a historical corrective in regards to one of mainstream comics’ longest-simmering controversies is hardly what regular readers of this small press-oriented blog come here on any given day (or night) expecting to find — but give it up for author Michael Hill, who’s proven with his new (though long in the making) surgically-detailed work, According To Jack Kirby, that he’s as independent as it gets, foregoing the arduous process of shopping his labor of love around to publishers in favor of self-publishing via the auspices of Lulu’s print-on-demand platform. And I’ve gotta say it’s a wise choice because this is, by its nature, an uncompromising piece of scholarship.

If Abraham Riesman poked a million tiny holes in the big lie that was Stan Lee’s fraudulent claim of being the Marvel Universe’s “creator” in the pages of his much-ballyhooed True Believer : The Rise And Fall Of Stan Lee, Hill lets the (undoubtedly hot) air out of them and sinks the inflatable Titanic — the damn thing is, though, he’s really just letting the historical record speak for itself. It’s neither his fault nor to his credit that the facts are Lee’s greatest enemy, he’s just taken it upon himself to assemble what amounts, by default, to an air-tight prosecutorial presentation. And as a Minneapolis resident, air-tight prosecutions are something I’ve had a front-row seat to of late, so I know one when I see one.

Is there an implicit bias on the part of the author that’s apparent from the outset here? Well, the book is subtitled Insights Drawn From Interviews Of Comics’ Greatest Creator, so no one need wonder whether or not Hill is a dyed-in-the-wool Kirby admirer, but as those of us who have followed the Kirby/Lee drama over the years can tell you — and as Hill catalogues in one blood-pressure-spiking incident after another — some of the sharpest daggers laid into the backs of Kirby, his family, and his legacy have been wielded by those claiming to be “Jack’s biggest fan.” I’d be tempted to say that their words are coming back to haunt them in this work, but that pre-supposes a level of conscience that many of these folks simply and clearly don’t have — for those of us who do, however, one of the more depressing realizations that Hill’s meticulous chronology makes apparent is how few actual defenders and advocates Kirby had all along. Read it and weep, as they say.

And yet righteous indignation — warranted as it is — really is nowhere to be found herein. Hill’s own writing is no more dispassionate or “neutral” than that of Gary Groth in his (in?)famous interview with Kirby for The Comics Journal (or, to flip the coin, Nat Freedland’s atrociously hagiographic “puff piece” on Lee that ran in the New York Herald Tribune and went some way toward alienating Lee not only from Kirby, but from Spider-Man creator Steve Ditko, as well), true, but if you’re searching for vitriol, you’ll be looking for a needle in a very deep and thick haystack. Hill knows that to indulge in such would only leave himself open to even more criticism from the “Lee Legion” than he’s bound to get anyway, and distract from the forensics that are the backbone of his thesis.

The one thing Hill does that Lee never could, though, is “show the receipts.” There are literally decades of them. And we should all be grateful indeed that someone has finally taken the time to sift through them all and set the record straight by means of the record itself. The King has posthumously found the champion he always needed and deserved with Michael Hill — but, even more importantly, so has the truth itself.

According To Jack Kirby is available for $19.99 from Lulu’s website at https://www.lulu.com/en/us/shop/michael-hill/according-to-jack-kirby/paperback/product-v7dnyy.html?fbclid=IwAR304AV-FZtCnkykeGjYFy0MctX2J6HLHdbioatejx_0zfh_xj7Y65QiOjM&page=1&pageSize=4

Also, this review — and all others around these parts — is “brought to you” by my Patreon site, where I serve up exclusive thrice-weekly rants and ramblings on the worlds of comics, films, television, literature, and politics for as little as a dollar a month. Subscribing is the best way to support my continuing work, so I’d be very appreciative if you’d take a moment to give it a look by directing your kind attention to https://www.patreon.com/fourcolorapocalypse

17 thoughts on “Michael Hill’s “According To Jack Kirby” : Cutting Through The Fog Of Lies With A Scalpel”