In my never-ending quest to find something new worth following on a month-to-month basis, I’ve taken a flier on a few recent Image first issues in the last couple of weeks, and in between the ones I decided to throw the towel in on immediately (No. 1 With A Bullet) and those I’ve decided to stick with on a tentative basis (Port Of Earth), there was one definite standout that hooked me from the outset and didn’t let go and/or up : writer Sean Lewis and standout newcomer artist Caitlin Yarsky’s Coyotes.

So, yeah, that’s the “plot” of this review given away right out of the gate, I suppose, but what the hell, let’s talk about why I felt this was $3.99 well-spent and why I think you should sink your hard-earned cash into it, as well, shall we? I think we shall.

Yarsky’s stunning cover will draw you in, no question about that, all eyes and blood and mystery and attitude, but once inside you’ll find a story that knows just what to tease and when — concrete details are few and far between, a trope that more opening salvos would do well to emulate, but in between expertly-shifting timelines and Sicario-esque action sequences we learn just enough about our protagonist, Analia/Red, and our audience identification point, one Detective Frank Coffey, to give us that inexorable tug to find out more.

The world is recognizable enough as “our own,” yet different enough in ways that are less than oblique, more than abstract — a martial sisterhood of fighters known as Victorias, hailing from a hidden desert locale called the City of Lost Girls, are at war (an eternal one, by all appearances) with Coyotes, who may be just that, may be a symbolic stand-in for patriarchal oppression, may be both — and the struggle, as they say, is real : clinically-dispatched ultraviolence and controlled bursts of ferocity being the order of the day for Red and her colleagues, unrestrained feral savagery being the Coyote way of doing things. Us mere mortals? We’re caught in the middle, it would seem — it’s just that we (in the form of Det. Coffey) don’t seem to know it yet.

I like the writing — it’s crisp, clean, quick, economical. It’s all about going in, getting the job done, and getting out. But I love the art, and that’s what I really need to gush about for a second here.

Yarsky goes above and beyond the basic task of illustrating a written story here, and intuitively adopts and reflects in equal measure the ethos and worldview of her characters through her art — it’s not fancy, but it is stylish : sleek and elegant in its brutality, horrific in its stark delineation, efficient and unforgiving is its precision. She does the coloring and lettering, as well, and the overall singular aesthetic she creates is as seamless as it is stark. Goddamn, but this book leaves a mark. 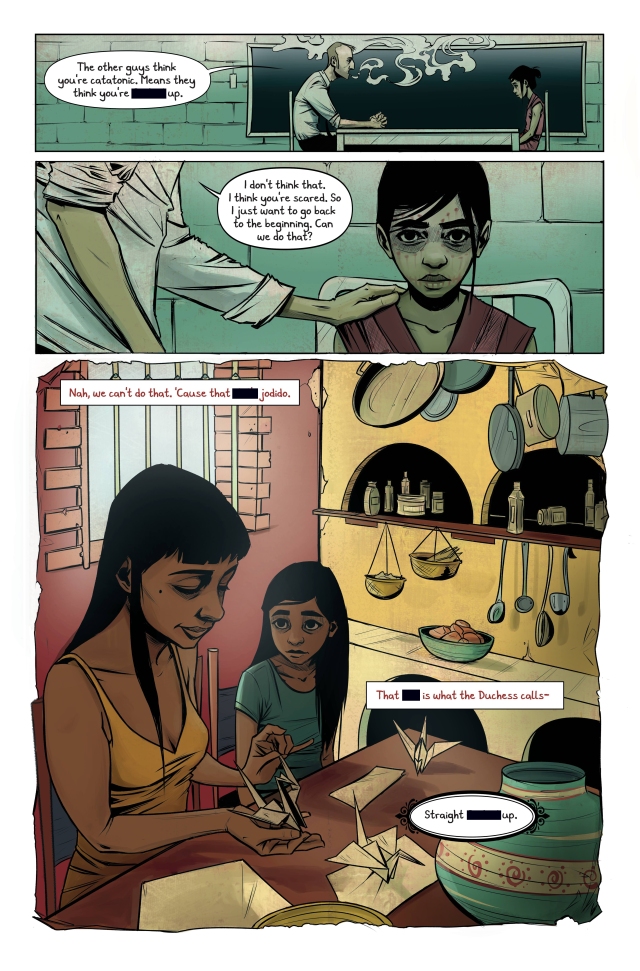 Now, sure, I suppose the possibility exists that things could go off the rails here, but my confidence level in these creators is high. There’s something very purposeful about Coyotes, a statement of intent that comes through in every word, every drawing, even if that purpose isn’t entirely clear yet (nor should it be). Part paean for innocent lost, part primal scream of justifiable rage/outrage, part less-than-subtle metaphor that’s arriving at just the right time in terms of the overall cultural zeitgeist, part homage to bad-ass movie heroines from Pam Grier on down, part something only partially defined, but completely felt — and altogether singular as something that gleefully mixes its influences right in front of our eyes yet seems as determined to subvert them as it is to honor them. There’s plenty here I’ve seen before, no question, but never done in this way, and never with this same intent.

At this point my natural cynicism should, one would think, kick in, and something between a list and an outright litany of things that could trip Lewis and Yarsky up going forward be delineated. But ya know what? I’m just not even gonna go there. Potential for greatness leaps from every page here, and I think we’re in very good — and, better yet, very dangerous — hands.

One thought on “Howling With “Coyotes””