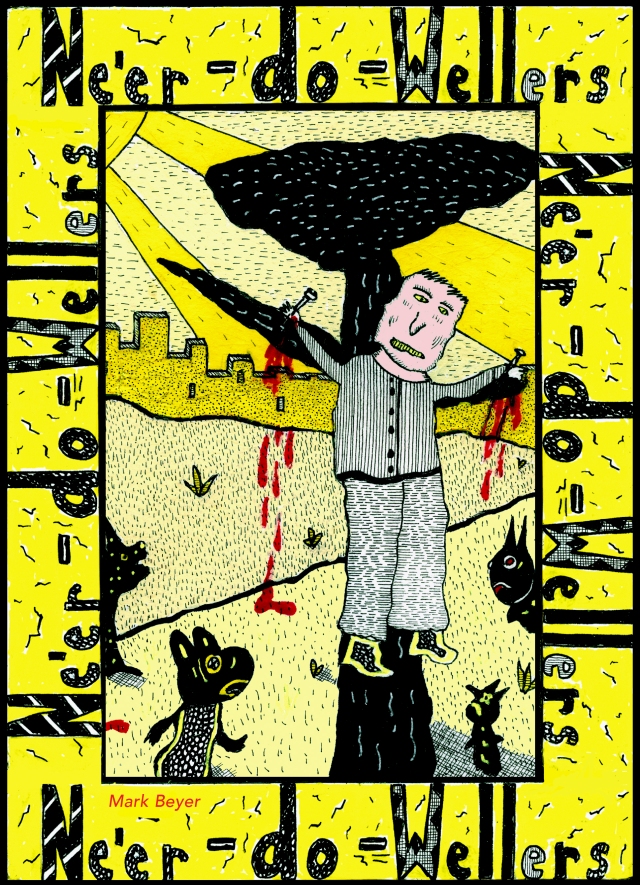 A varied and disparate selection of books came my way this week, some easy enough to find, others decidedly less so —

And on the “decidedly less so” front, we’ve got legendary auto-didact Mark Beyer’s Ne’er-Do-Wellers, a limited-as-hell (as in 200 signed and numbered copies) new publication that comes to us by way of Trapset Zines and was issued in conjunction with the opening of a new gallery show of Beyer’s work. Not so much a “comic” per se as a series of illustrations accompanying reports of particularly strange and sometimes brutal crimes that took place in recent years in Beyer’s hometown of Albuquerque, N.M., this is as stark a distillation of absurdity, deadpan humor, and pessimism for humanity as a whole as you’re probably expecting, and certainly Beyer’s unique-unto-himself style of illustration is every bit as much a dark joy for the eyes as it’s always been, but — and it’s a big “but” —

28 bucks for this thing? Seriously? It’s advertised as being 25 pages long, but it’s not, and while the three postcards and greeting card it comes with are definitely terrific, they’re all older illustrations, and the cover is just a colorized version of one of the interior drawings. The economics of scarcity is the only thing that can in any way justify the price of this thing, and by “scarcity” I don’t just mean its low print run, I mean that new Beyer work is (very) few and (very) far between.

For that reason alone, then, I’m pleased to have Ne’er-do-Wellers as part of my library. I really do love it and have spent several hours poring over every detail of every drawing. But that doesn’t mean that the whole package should, in a perfect world, have cost about ten bucks less. 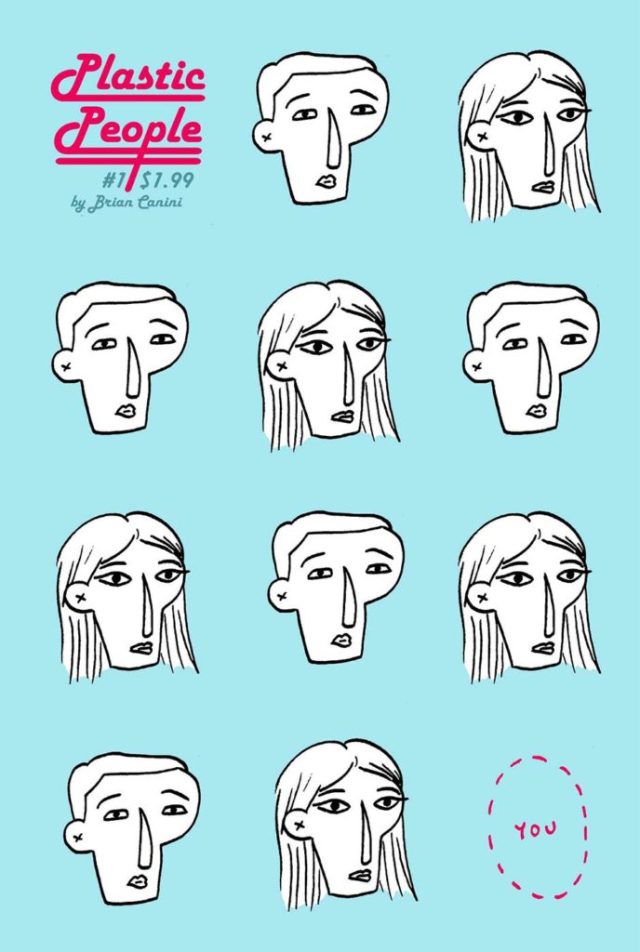 Plastic People is a fascinating little ongoing mini-comic by Brian Canini published by Drunken Cat Comics that just saw its third issue roll off the presses. Set in a future world where plastic surgery has reduced everyone (or, at least, everyone in L.A.) to a kind of bland sameness, this seems to be a bit of a “slow-burn” storyline (we don’t even find out what our protagonists do for a living until the second installment) for a mini-comic, but I dig Canini’s minimalist style and his characters seem more “people” than they do “plastic.” $1.99 for eight tiny pages is a little bit steep, I’ll grant you, but not out of line with what small-press readers are used to paying for similarly-formatted publications, and so I have no qualms about recommending this one to anybody with a little extra spending money who’s looking for an immersive new story to get hooked on. 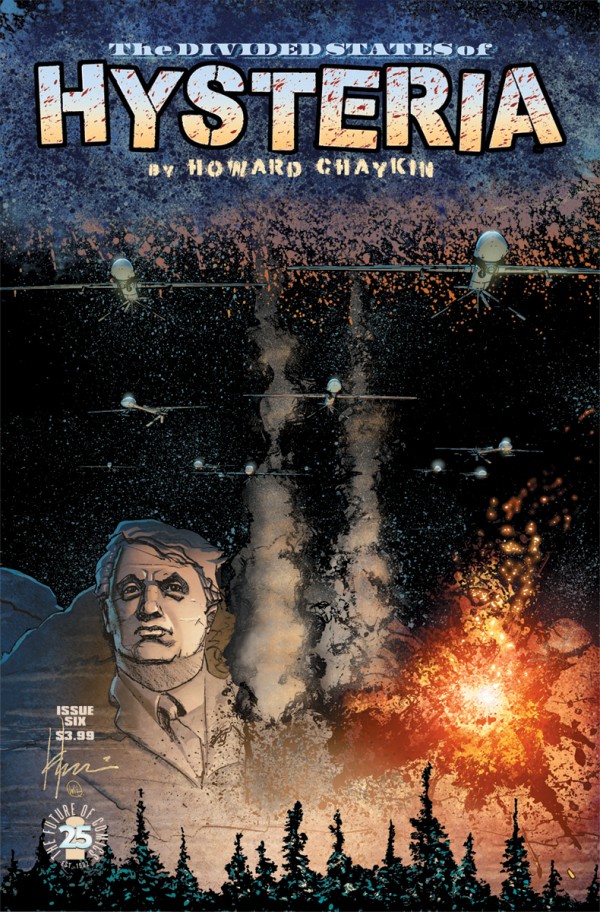 The Divided States Of Hysteria #6 sees Howard Chaykin wrapping up the first arc of this apparently-now-ongoing series (it’ll be back at some point in 2018), and while this comic has been a strangely-paced-and-plotted affair even by Chaykin standards and he pulls the (temporary, as it turns out) ending out of his ass, I’ll be goddamned if it doesn’t work anyway, and if protagonist Frank Villa doesn’t turn out to be marginally less of an asshole than he’s seemed to be (or, for that matter, than Chaykin’s deeply-flawed “heroes” almost always are). And all the folks leveling (largely sincere, in my view, but nevertheless misplaced) charges of transphobia against this book will certainly be surprised to see who Villa rides off into the sunset with — or rather, they would be if they were still reading. Chaykin’s art on this issue seems a bit crisper and tighter than the last few installments, Ken Bruzenak’s lettering and effects still look a good couple of decades ahead of their time, and there’s something very near to moral redemption offered up by the time all is said and (again, not exactly) done here — but for my money, the best thing of all about this book comes our way via the three-page “house ad” at the very back. I’ll say no more, beyond : it’s about time, Howard. In fact, it’s about time — squared. Anybody else as excited as I am? 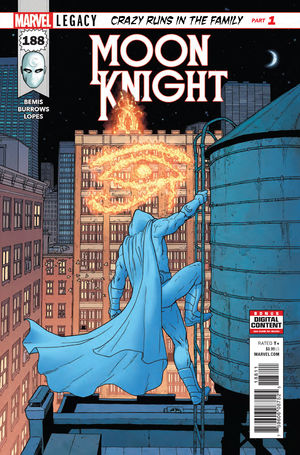 Lastly, knowing full well that I risk whatever meager reputation I have by admitting this, I’ll just ‘fess up to the fact that Moon Knight has always been my favorite Marvel super-hero, and the character has been in the midst of something of a creative renaissance since the Warren Ellis/Declan Shalvey re-launch a few years back. Writer Max Bemis (whose work I’m not terribly familiar with, but who apparently fronts a band of some sort) and artist Jacen (Crossed, Providence) Burrows are the latest to take a crack at everyone’s favorite multiple-personality vigilante with Moon Knight #188 (once again, I won’t even attempt to begin to explain Marvel’s new “Legacy” numbering), and while the story’s only a middling affair that centers on a psychologist and her patient (neither of whom, as far as I know, readers have ever been introduced to previously) rather than our ostensible protagonist (who only appears in a brief dream sequence),  Burrows absolutely nails it on the art, and that’s more than enough to keep me around for at least a few issues to see how things progress. His style is remarkably different to that of the other top-flight artists who have worked on the character in the past — from Sienkiewicz to Shalvey to, most recently, Smallwood — but his eye for detail and expression really shines through, and his figure drawing is becoming far more fluid and less “posed” than it sometimes was on previous projects. It’s well past time that wider audiences than Avatar projects (even Alan Moore-scripted Avatar projects) have going for them were exposed to this guy’s work, so here’s your chance.

Okay, that’s enough, I should think, for this week — I’ve got (yet another) package from John Porcellino’s Spit And A Half on the way, as well as a bunch of Aaron Lange comics, so there should definitely be some interesting stuff to talk about when we meet here again in seven days.